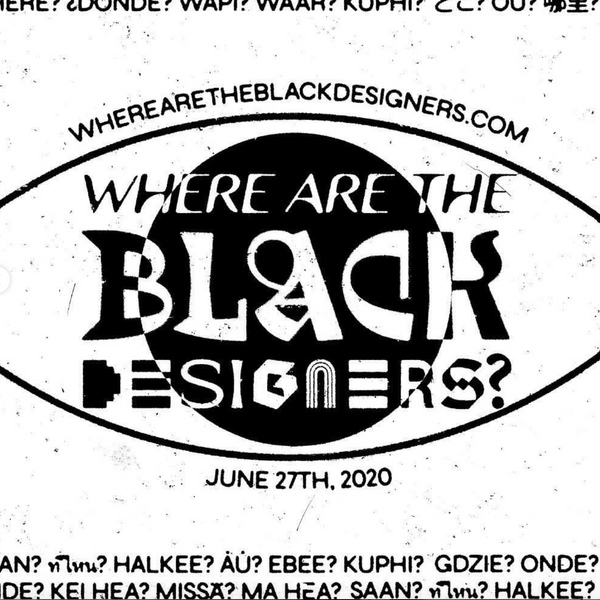 This Digital Event Asks 'Where Are The Black Designers?'

Black voices are egregiously underrepresented within tech and creative fields, and that includes the design industry. Needless to say, the question of how we can start hiring and amplifying Black talent in design is long overdue — and the new initiative seeking to rectify this is none other than the aptly named Where Are The Black Designers.

The brainchild of designers Mitzi Okou and Garrett Albury, Where Are The Black Designers aims to bring Black designers to the forefront by connecting them with other designers, industry voices, and educators to discuss changing the fact that only 3 percent of all designers across all industries are Black, per the 2019 AIGA Design Census.

It is time that we ask “where are the black designers?” Please join us in starting this conversation. It is really important and crucial that we all come together for this initiative because this is not only for the designers of color in the present, it is also for the future designers of color as they need us now more than ever. #wherearetheblackdesigners For people that are hard of hearing, the transcript of this video can be found in the comments below.

Started while Okou and Albury were studying at the Savannah College of Art and Design, Where Are The Black Designers was initially born out of their desire to host a conference addressing the lack of Black creatives at the school.

And while it began as "a means of promotion, engagement, and involvement," they said that they're now making the initiative "a space for creatives to collectively ask 'where are the black designers?,' and hold the design industry and the education system accountable."

"While we failed to get it off the ground within our community, we came back together after a few years with more passion and experience," Okou and Albury explained. "In the last few weeks, we began to adapt our plans from the past to something more direct, accessible, and immediate."

As such, they will be hosting a virtual conference featuring workshops and a panel of industry players on June 27, with the ultimate goal of addressing and finding solutions to the systemic racism, barriers to entry, and diversity issues currently facing all creative industries.

"We're extremely excited to highlight creatives of color across multiple disciplines," they said. "While the title alludes to design in the traditional sense, this conference will serve as a hub across design, fine art, education, entertainment, and publishing to revolutionize representation in the creative and tech space."

And thus far, the amount of RSVPs, as well as the response to their call for event support and speakers has been "overwhelming." According to Okou and Albury, they had initially hoped "a couple of hundred people would attend our event."

"But we absolutely were not expecting the sheer amount of people that are behind us," they added. "Our wildest goals and hopes are that this movement serves as the basis of a new standard in representation, inclusivity, and diversity."

RSVP for the event via Where Are The Black Designers's website, here.