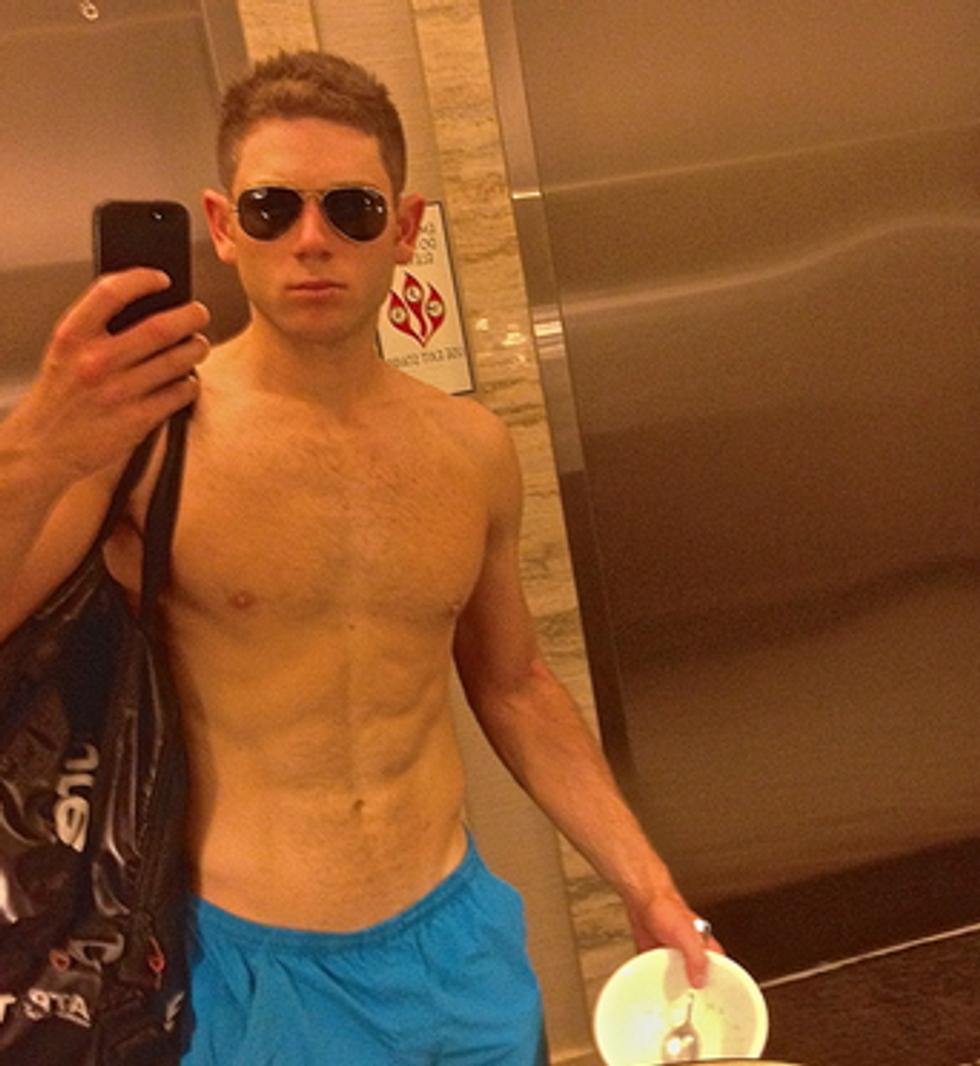 by Grace Moore
PAPERMAG
While everyone's been obsessed with #TheDress, there's been another little meme-let circulating among certain corners of the Internet: America's Fittest Couple. Jon and Lyuda -- or AFC (as we'll heretofore call them) -- are a twentysomething couple who live in Palm Beach and who run a gloriously head-scratching fitness and nutrition blog that resembles a real-life version of Body By Trey. And we have so. many. questions. First of all:

Equal parts basic fitness advice ("Make Stretching a Habit"), love-y dove-y relationship anecdotes, workout selfies and mind-numbing video montages of the couple working out while Game of Thrones-esque music plays in the background, the blog seems like it's got to be some elaborate piece of performance art, right? Right? Maybe not. It turns out this isn't the first website AFC has created. Jon has a separate blog called 'Creating Substance' in which he models himself after some sort of Tony Robbins-meets-Tony Little fitness guru. There's lots of cryptic, cult-y sounding, capitalized catchphrases ("the Framework," "Creating Substance Tamed Beast Cycle Â©," "Feel Good State," "Substance Creators") and blogs with titles including "The Substantial Erection," "Eat Some Imported Bread" and "Take Control of Your Bowels." Meanwhile, their "About" reads:

Lyuda and Jon met at the Harvard indoor track on a snowy New England evening in the fall of 2011, where it was love at first sight.

Over the last three years, the couple has pursued their passion for fitness, nutrition, and a healthy lifestyle. Much of what they've learned thus far came from trial and error, and their progress has been anything but a straight-arrow path. The two have grown and matured together and have pushed each other to go the extra mile in their fitness and diet routines.

Lyuda and Jon's goal?  To become America's Fittest Couple. And they welcome you along for the journey.  You'll learn the many strategies and secrets they already know, and you'll benefit from the new knowledge they gain going forward.

While we can only hope Jon and Lyuda are trolling us, our better instincts tell us that yep, this is real and it's spectacular.

What do they mean when AFC says they're looking for "like-minded couples"?

If you click "Date" in the navigation column, it takes you to a contact page inviting the aforementioned like-minded couples to get in touch with them if they're into a day of hard exercise or frozen bananas. But, uh, what kind of "hard exercise" and "frozen bananas" are we talking about here? Is this actually a swingers ad? Actually...then this whole thing would make so much more sense.

Does AFC really only eat out once a year?

"Every year, America's Fittest Couple designates one day for "eating out." Because it is such a rare occasion, plans are made months in advance and the location is carefully selected. Usually, the Annual Restaurant Meal is aligned with one of the three holidays the Couple celebrates: their anniversary, Lyuda's birthday, or Valentine's Day. "...While the Annual Restaurant Meal is a highly anticipated event in the Couple's household, mobilizing to actually get there and follow through with it requires tremendous resolve." Say whaaat?
If you need to find us, we'll be pondering these questions while we're working on our glutes. #LegDay