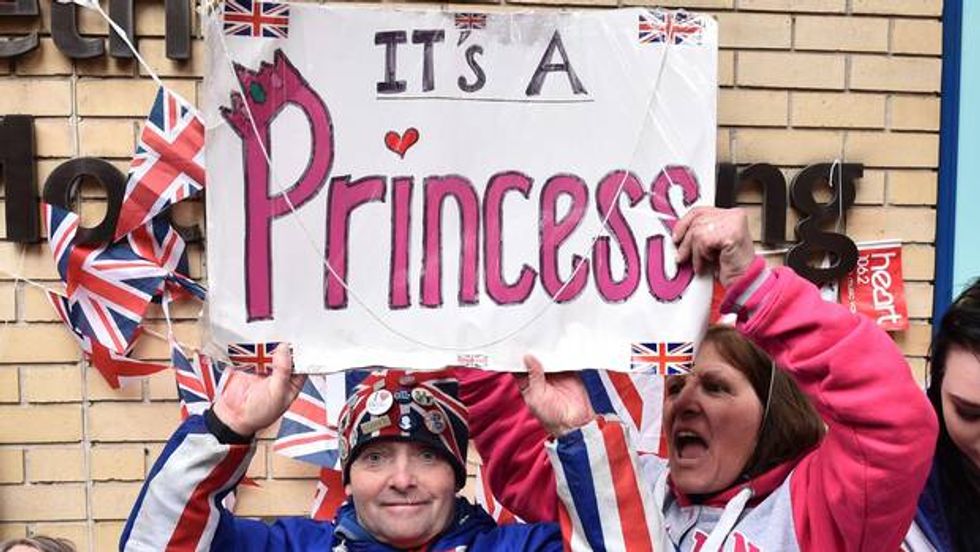 What Will the New Cambridge Princess Be Named?

by Mickey Boardman
PAPERMAG
With monarchists the world over rejoicing over the birth of a new little HRH to the Duke and Duchess of Cambridge odds makers have gone into overdrive in attempts to pick the name for the little Princess. Paper editorial director Mr. Mickey is a lifelong royal-watcher, and was asked for his opinions on the most likely names. His picks below.

1. Alice
At press time this was considered the favorite. Alice was the name of the mother of the Duke of Edinburgh, an eccentric Princess who was born in 1885 at Windsor Castle. That Alice is the great-great grandmother of the new princess makes it an incredibly strong choice from a historical and sentimental perspective. The Duke will be 94 next month and this would be a sweet tribute to him.
Odds: 7/4

2. Charlotte
Another favored name. Charlotte is a beautiful name, but it's a sad choice being forever associated with Princess Charlotte of Wales, the daughter of George IV who died in childbirth in 1817. It was because of her death that the future Queen Victoria moved up to the top of the list of succession. There hasn't been a Charlotte in the royal family since with the exception of Queen Victoria's granddaughter Charlotte of Prussia, who was not the nicest. I would be shocked if this was the choice.
Odds: 3/4

3. Victoria
This name was the most popular girls name in the royal family during the generation of Queen Victoria's grandchildren. The current Queen didn't choose it for her own daughter, just as George VI had not chosen it for either of his daughters. It's likely to be one of the middle names, but I don't see it as the first name.
Odds: 5/1

4. Elizabeth
This name is the dark horse. The current sovereign is hugely popular and later this year she'll pass her ancestor Victoria as the longest reigning Queen in British history. It would be a nice tribute to have a great-granddaughter named after her in her 63rd year on the throne.
Odds: 6/1

5. Alexandra
From the time Princess Alix of Denmark married the future Edward VII and became Alexandra, Princess of Wales, this name has been popular in the royal family. One of my favorite members of the family is Princess Alexandra, the first cousin of the Queen. It's not extremely likely as a first name, but I would love it.
Odds: 7/1

Diana. No royal in modern history inspired as much devotion as the late Diana, Princess of Wales and her legions of diehard fans around the world would lose their minds with excitement if the little Princess was named Diana. But as beloved as she was the names in the main line of the royal family are almost always traditional: Elizabeth, Anne, Margaret, George, Henry, Edward. Nonetheless I think Diana will absolutely be a middle name as a tribute to the new Princess's beloved late grandmother.
Odds: 10/1

Mary Adelaide. This was the name of the last Cambridge princess in the royal family (1833-1897) . She was also known as "Fat Mary," due to her obesity. She was hugely popular and was the mother of the future Queen Mary, making Princess MA the great-great-great grandmother of the new little Princess. This is an incredible long shot but I love the idea.
Odds: 13/1


Photo via The Globe and Mail.
You May Also Like
Famous People