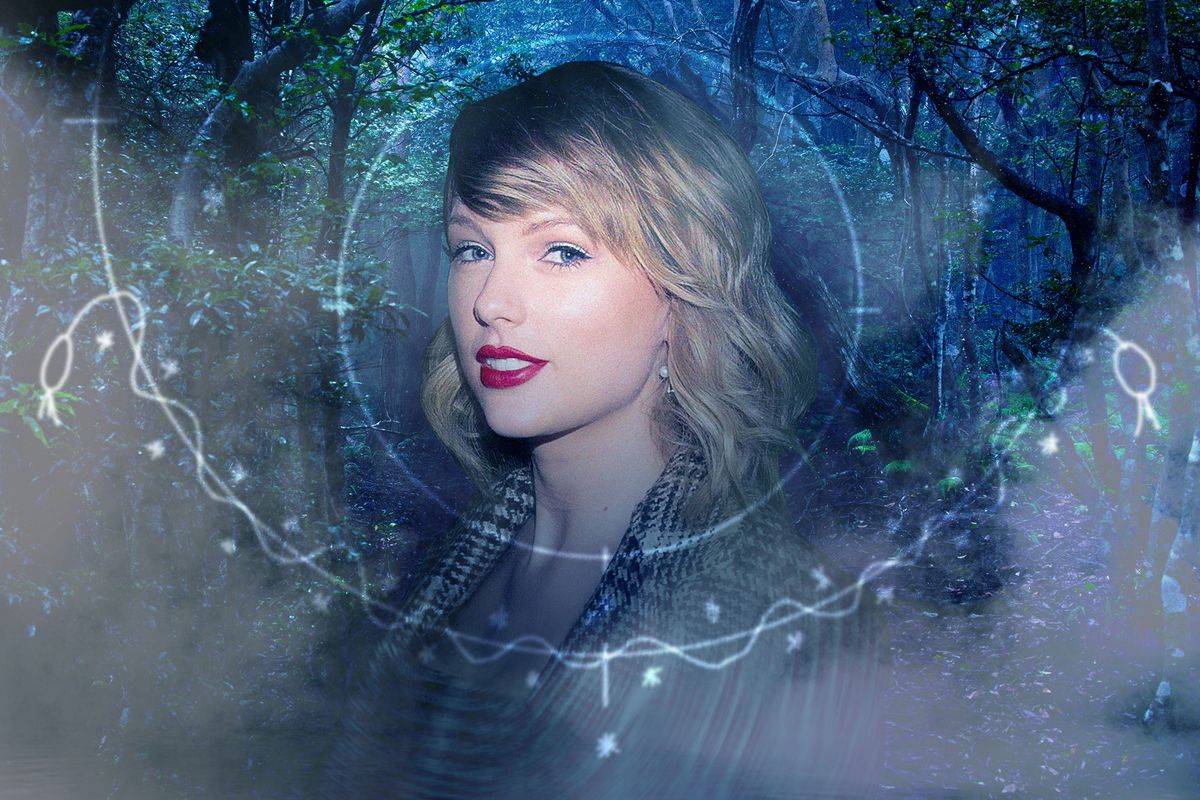 The Swifties Who Think Taylor Has 'Voodoo' Powers

Taylor Swift's ascent to mega fame — she was serendipitously spotted in Nashville's fabled Bluebird Cafe during an open mic night at the age of 15, and has gone on to sell more records than pretty much anyone else in history — has a nice mythology to it. There's something magical about the story of a young girl with big dreams and a talent for diaristic songwriting making the leap from country radio to Billboard pop charts. As many of her passionate stans would have it, there might even be some... sorcery involved. And not just of the Jack Antonoff synth wizard kind.

First popularized on stan tumblr and Twitter, "tayvoodoo" is the somewhat problematic term used to describe how Swift's career trajectory is linked together by a string of spooky karmic episodes: everyone who has ever doubted her or stood in her way has eventually reaped what they've sown. The obvious application of tayvoodoo is Kanye West's ongoing fall from grace, after years of feuding with Swift's camp following that infamous 2009 VMAs incident. But Swifties also use the term to describe how the careers and personal lives of Swift's more minor rivals have declined ever since they sided against her.

"I'm not really sure how it originated," the admin of Swift stan account @breathincruel tells me over DM. "But it's based off the fact that every celebrity who does her wrong gets wronged somewhere down the road, whether it has to do with the drama they gave her or not." Meanwhile, Taylor "just stays in her lane and lets karma do its job." On Urban Dictionary, the symptoms of tayvoodoo are listed as "crippling of mental/physical health, diminishing professional success, bags stopped, comments flooded, your name trending on twitter (along with #YourNameIsOverParty), irrelevance."

West aside, some of tayvoodoo's most high-profile supposed victims include the singer-songwriter's former beau Calvin Harris and chart rival Kacey Musgraves. Harris, @breathincruel points out, "hasn't been nearly as popular" since he disputed her songwriting credit on their hit track "This Is What You Came For" in 2016. Musgraves, who recently announced her impending divorce from Ruston Kelly (a tragedy, given their relationship inspired one of the most gorgeously romantic albums of all time), was perceived to slight Swift by allegedly "liking" an Instagram post by Scooter Braun at the apex of his and Swift's battle over her former label Big Machine. (Musgraves has never publicly commented on the feud.)

Once you open your eyes to the truth of tayvoodoo, you see it everywhere. The Grammys recorded their lowest-ever viewership numbers when Swift skipped the show after being snubbed for all major nominations — one Tumblr Swiftie gleefully attributes this to the power of tayvoodoo. Tien, admin of another Twitter stan account @bigreputatien, links Swift to TikTok's difficult battle with the Trump administration. "'Old Town Road' was the #1 song on the Billboard hot 100 charts when Taylor released her first two singles from her Lover album," he explains. "'Old Town Road' was #1 and blocked both songs from a #1 peak. [It] became popular because of TikTok, so my joke was that because TikTok indirectly blocked Taylor twice (by making 'Old Town Road' go viral), it was tayvoodoo that is shutting down the app."

For tayvoodoo skeptics, some careers to watch closely might include those of close Swift allies like Troye Sivan, Selena Gomez and Shawn Mendes. All of whom, it must be said, are currently thriving. Stream "Easy"! The exes who she reportedly ended things amicably with, like Tom Hiddleston, are also doing fine. "Tom Hiddleston was def a good person to Tay and I don't think they ended on bad terms at all!" @breathincruel clarifies. "In Taylor's songs like 'Getaway Car' it's like she's taking the blame for that relationship failing."

Taylor Swift's most recent album Lover is all rainbows and forgiveness, but her 2017 record Reputation is likely what originally inspired the revenge-driven mentality of tayvoodoo. The lyrics of Rep's first single, "Look What You Made Me Do," now read more like a warning or prophecy: "The world moves on, another day, another drama, drama / But not for me, not for me, all I think about is karma". If only Kacey and Kanye had listened.

Mostly though, "tayvoodoo" is a stan-originated term, utilized not by the musician herself but rather her rabid online fanbase. "When another stan account drags Taylor, and then their account gets suspended a few days later, we'll say 'Omg tayvoodoo got them!'" Tien explains. "It's really just a joke that stan culture uses, but at this point I'm scared of tayvoodoo and what it can do."

One thing's for sure: this writer is publicly going on the record as a massive Taylor Swift fan. She is incredibly talented, and I wish her nothing but the best.