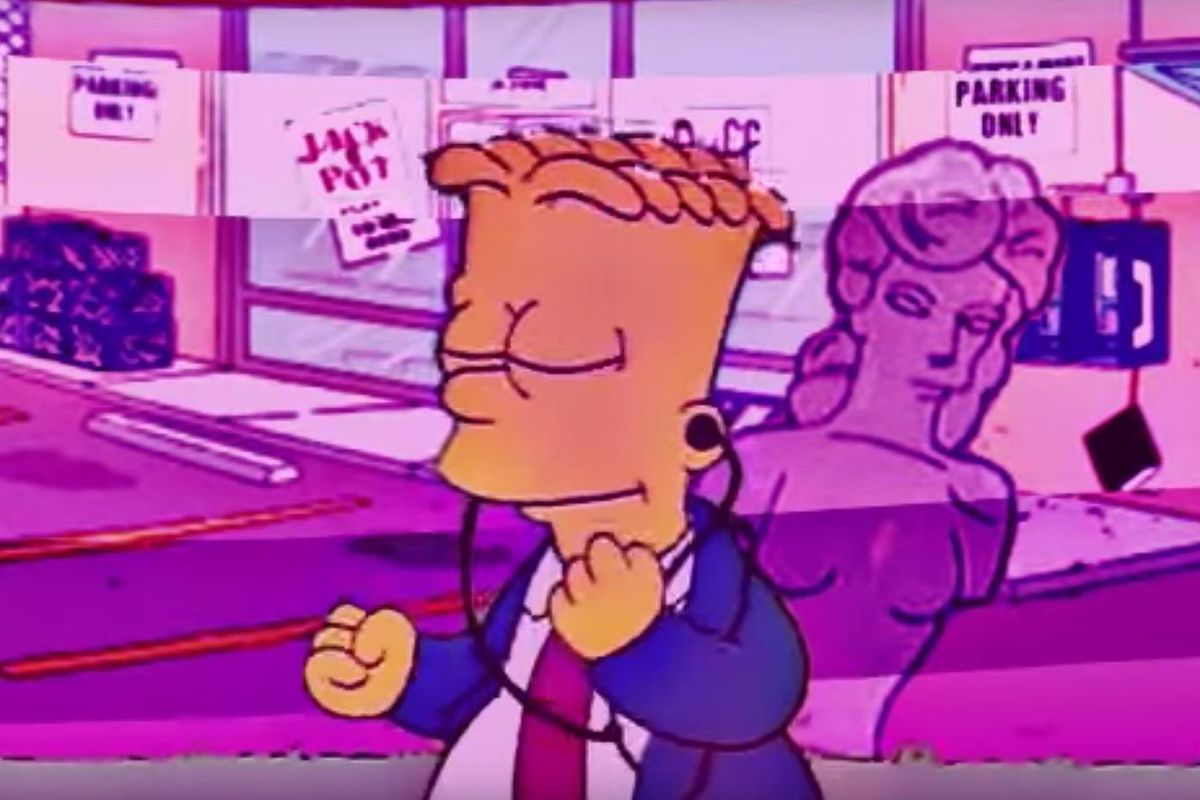 What Is Simpsonwave? A Brief Introduction Via the Microgenre's Lucien Hughes

Per KnowYourMeme, it's loosely a video series marrying clips from The Simpsons with sonic and visual aesthetics typically assigned to the Internet-bred vaporwave movement. The visuals are characterized by short, decontextualized clips from the iconic cartoon series featuring classic vaporwave motifs (i.e. checkerboard patterns, Greco-Roman statues) and then spliced together to create tripped-out narrative videos for songs by popular vaporwave artists, including Blank Banshee and King Coffee. Its fascinating cross-section of #nostalgiaaesthetics and spacey mall music makes it a prime, post-modern "weird Internet" hit.

But the questions that plague all memes still remained: Where did it come and, well, why? Two weeks ago YouTuber Sam Sutherland attempted to answer some of this with his upload, "Is ＳＩＭＰＳＯＮＷＡＶＥ a joke?". The video the made the rounds online, appearing in articles about Simpsonwave on Thump and the Verge.

Despite the growing coverage, it was was still unclear what spawned this meme. We reached out to Lucien Hughes -- a 19-year-old British student namechecked in Sutherland's video as the creator of several popular Simpsonwave videos -- to find out a little more about the microgenre's origins, mash-up culture at-large and why people just love a good T H R I L L H O U S E reference.

Where did Simpsonwave come from? Was it this microgenre you gravitated to for any particular reason?

I think I coined the term Simpsonwave, but the first thing I know of in the visual subgenre was Spicter's Vine. I just remember watching this and it really struck a chord with me -- the combination of nostalgia-driven electronic music and old Simpsons clips just seemed to really work.

The place that Simpsonwave really grew was the Facebook group [called] "Simpsons Shitposting," which is and always was a fun, but stupid timewasting, meme-oriented group. A guy who goes by midge on YouTube posted a couple of mash-ups he'd made to some popular vaporwave songs, and as I was ill and off university at the time, I thought I'd try [to make] a few of my own.


I think The Simpsons and the vaporwave/synthwave/retrowave movement go hand in hand because the latter is so nostalgia-driven and The Simpsons is pretty unique in that it's something that almost everyone born between the late '80s and early '00s grew up watching. It's something that's very easy to sit back, enjoy and connect with.


As mentioned by Sam Sutherland, you seem to be the driving force behind a lot of these YouTube videos — what exactly is your relation to Simpsonwave? Are you visuals focused? Because you don't compose the music itself right?


As I've mentioned, I wasn't quite the first to do this, but I've watched it evolve and I've obviously had a large part in it. For me, the first couple of clips I uploaded were very much a joke and appealed more to the shitposting community than actual music fans, but then I realized I could construct a new narrative by removing the context of the clips I used. It became a bit more of a serious thing for me and they were gaining traction on Facebook so I started uploading them to YouTube.

When I'm making a video now I'm very much aiming to convey a certain atmosphere, and people seem to appreciate that. I know I'm not really doing anything original -- mashup culture has been around for ever -- but this combination of visuals and music seem to strike a chord with others in the same way that it [does] for me.

I haven't composed any of the music I've used, but I worked with the producer King Coffee on my video "ＣＯＯＬ ＫＩＤＳ １９９６," which worked out pretty well and brought a lot of attention to his work. I'm also currently collaborating with YouTuber/vaporwave artist FrankJavCee to produce an original video. I'm a huge music fan and I've started experimenting with producing my own tracks too.

What are your thoughts on Sutherland's explainer? What's the reception to it been like?

I thought the This Exists video was pretty well executed, although he did get a couple of dates wrong and misattributed a clip. It definitely brought a lot of attention to the scene, and my channel saw a huge increase in attention. It's cool to see a lot of other people making some great mash-ups as well. It was pretty crazy to see my name mentioned when [just] a few months ago I was uploading these videos to my personal channel and they were getting a few hundred views.