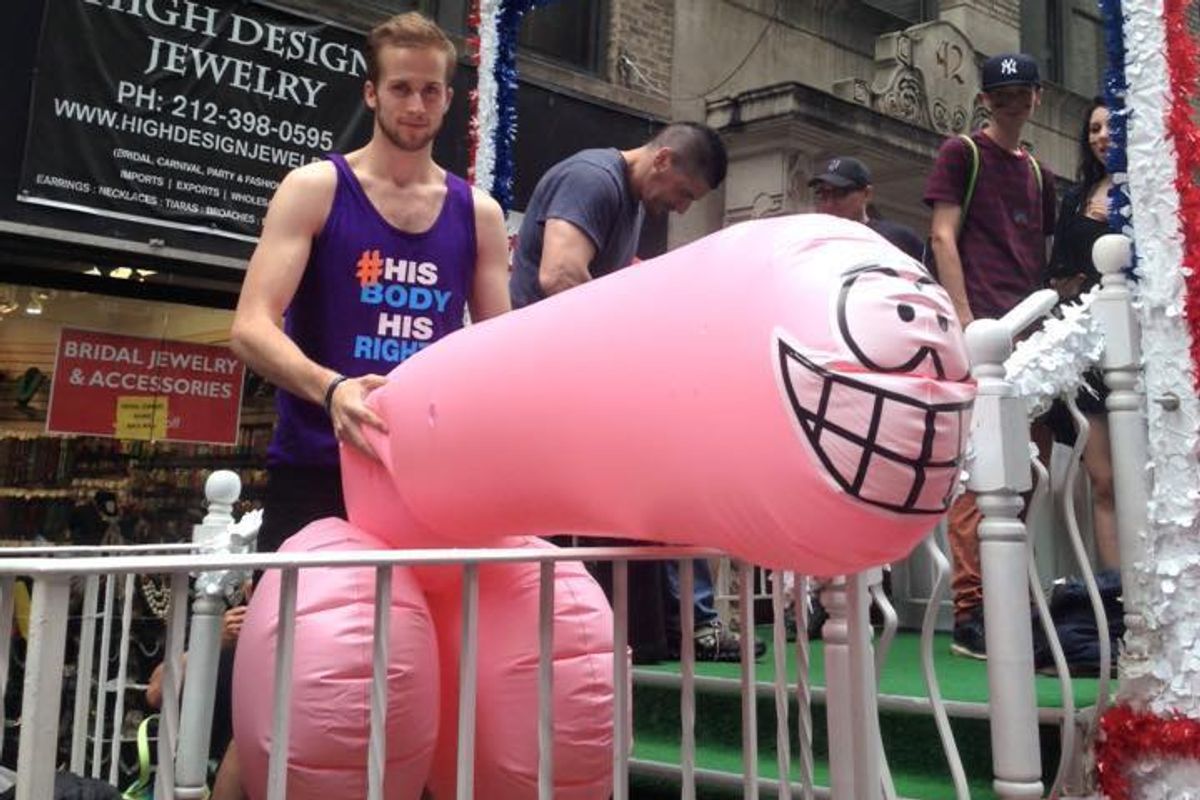 We Spoke To An Intactivist Fighting For His Foreskin

We first stumbled upon the concept of intactivism via a meme-loving Facebook group called Intact America, a movement which sparked our curiosity as something we'd personally never heard of. As such, we went out in search of a foreskin activist to find out more, and found ourself Alexander Partridge, a 23-year-old writer and anti-circumcision advocate who is fighting for a man's right to choose what happens to his own body -- to fascinating ends. Read our Q&A below to find out more about this oft-maligned strain of autonomy-centric activism.

I guess the easiest place to start is how did you hear about the movement and get involved?


Basically I got into it when my sister got pregnant and her culturally-Jewish boyfriend said they were going to cut and I asked "why?" And she said "Oh, because the dad is and that's just what they do." But there wasn't any like solid reason, so I did a lot of research and went from being kind of neutral about it to becoming extremely against it.

Do you have a personal stake in the intactivism debate?


My dad's from England, so no one in my family was circumcised, but growing up in America in sex-ed class in 5th grade, we went over circumcision. But like, I didn't even know what it was, because why would you talk about that when you were that little? So they told us that some parents circumcised their kids because it's cleaner, for hygiene. You could tell they had very positive connotations with circumcision and very negative connotations with being uncircumcised, so I was very mad that I wasn't circumcised.


Can you give me the basic rundown of arguments against circumcision?

The foreskin is the most nerve-dense part. It's extremely sensitive. I wasn't sexually-active when I was learning about this, but we have to consider that when a baby grows up to be an adult, any modification you do to them, they have to live with that for their entire life. They didn't have a say. I knew 3 guys, all American, that were circumcised and all three of them wish that they weren't. It's something that a lot of guys don't talk about because it's something that if you talk about it people trivialize it and people make fun of it or they act like it's a non-issue -- but it's an issue that affects a lot more people than our society acknowledges.

There's a lot of chatter on feminist blogs regarding intactivism is sort of derailing.

Did you see—my photo was on one of [those blogs] -- it said "Cut Foreskins Are A Feminist Issue Too."...I was standing in front of the White House with a sign that said "Ask me how much I love my whole penis!" Ever since 1997, all women are protected from any form of genital mutilation in the United States, even the slightest nick is prohibited. But with a baby boy, you can slice off half of his penile tissue and it's fine and promoted. There's no consent, it's not medically necessary, it's easy to clean and the majority of the world doesn't do it.

But what I was reading said that it was derailing from a lot of issues like female genital mutilation in Africa. What do you think about like HIV-riddled countries that use it to mitigate the effects?


That's the one area that I get kind of cornered in and it's hard to fight against something that has been shown by several studies to work in those areas, but what I will tell you that in any industrialized, Western nation that has running water and all the resources we have, we cannot possibly compare our situation to that of places in Africa where they don't have the same resources and everything. I'm trying to make my point across to Americans who have this as a cultural norm. We have all the resources to prevent that issue, we have condoms, we have Prep [medication to prevent the spread of HIV] now. Still, if you think about it, HIV hit the US worse than Europe. The United States in the 80s was like a gay genocide with HIV and they were all circumcised men, mostly, so you still get it. But if I had to look down, and see a scar on my dick for the rest of my life, and have decreased sexual function because my mom thought it was cleaner or that I wasn't going to get HIV because of it, I would really resent her for that. And I do know guys who resent their parents for that, but they just aren't activists. They're just random guys, gay or straight. A lot of times they talk about it and they say, "Yeah, my parents cut it off..." They kind of talk about it dismissively or nonchalantly, like "this was done to me" -- but you could tell it actually bothers them.

What about the argument that parents violate a lot of bodily autonomy for young children? That that's sort of what parents have to do, is take that responsibility.

My response would be that children aren't sexually active and if there's any slight, possible benefit of not getting HIV or whatever, that can be done when they're an adult. You can get circumcised when you're an adult. My defense is that it's not medically necessary, vaccines do save lives, and I hate when I hear people compare circumcision to ear piercings. It could only work if ear piercings impaired people's hearing, because circumcision alters sexual function. It's not an opinion, it's a fact. It's like the eyelids for the penis. Eye lids retain moisture, just like the foreskin retains moisture in the glans and it covers it. The only time the head it's supposed to be exposed is when you're having sex or you're in the shower and you're washing it, but it's supposed to stay covered at all times so it retains sensitivity.

You said that the people you've talked to have resented it in some way or another.


One way, you have a choice -- and usually you would never want to take it away because when you have a foreskin, you know what it does, it works. If you want to interview a bunch of guys who have their foreskin, especially European guys, they act like it's a given. They talk about it, the word in French is "prépuce" and I feel like it's thought of as this fundamental part of the penis. But in English, we say "foreskin," and it has such a negative connotation. It seems like this boring extra layer of skin.

Historically speaking, why do Americans do it?

So this goes back to the Victorian Era, and actually when I learned about this I didn't believe it...So, basically, in the Victorian Era, they thought that circumcision could cure a bunch of different illnesses/ Just like they put leeches on people. They thought it could cure a lot of illnesses, and so if they saw a child playing with his penis they would punish him by circumcising him because they knew it was sensitive. They didn't want sexual pleasure, sex was only a means for procreation in this time. They thought circumcision could prevent homosexuality, that it could prevent dementia, like so many illnesses. And Harvey Kellogg, the guy who founded Kellogg's, was the guy who spearheaded this -- and after World War II, health insurance companies started covering it so they made it very easy and affordable. The peak of circumcision was like the 50s, 60s, 70s, and then it kinda went down.

End the cycle of circumcision.
Posted by Intact America on Saturday, 7 November 2015

What are the current state of affairs? Are less people getting circumcised?

Less people are getting circumcised, especially on the West coast and the East coast, places that seem more educated. But the Midwest still has the highest rates, Midwest and the South.

A lot of the info I found was on Men's Rights Activist sites. Is being linked to the MRA movement a problem for your cause?

I've noticed that. I think a problem for the intactivist cause is that it comes off as such a fringe group -- like these angry men who blame everything on being circumcised. It's like "Oh, I was circumcised, blah blah," like kind of whiny. I can't be way too involved in it because it can be stressful to be around that energy. It's just another thing that makes it [a cause that's] hard to fight for. [The biggest detriment though] is that it's trivialized so often. I'm used to people, on a regular basis, giggling when they hear what I speak out against. People just act like it's not important, like you should worry about something else -- like why do you care about this? But I care about this because I've sat next to several guys who are having trouble reaching orgasm or are sad because there's a scar on their penis that they didn't consent to, and that they can't have sex the same way that I can.

How strong would you say the movement is? Is there like a New York chapter? Or do you guys meet nationally and hold rallies?

It's like several thousand people in the US, and they sometimes do demonstrations at hospitals. I know a few people who go in a van to several cities. They're called the Blood Stained Men, and they wear white jumpsuits with red stains on their crotch area. It's very graphic, kinda gruesome -- and I feel like that just scares people away, so I don't like that. I just want to normalize the male body, the full, natural male body. I want people to understand that [you're doing something to this baby], by objectifying him and cutting him. They live with that for the rest of their lives, and a lot of times they suffer different problems because of it. Like maybe they'll have trouble reaching orgasm or it's really dry and callous, because when it's exposed all the time it callouses.

The head of the penis callouses because it rubs against your clothing all the time. So imagine you go through years and years of this callousing and then you're just not satisfied by your sex, and it's more trouble to do anything, and you don't even realize that a big part of this is because an essential part of your anatomy was taken away before you even had sex. The male anatomy is censored in the US, and a lot of women I know have never had sex with a guy who had foreskin before, and they don't even know what a penis really is.

I would say to that that I respect women's bodies, and if there was any issue with female children getting cut in the US I would fight for them just as hard as I would for boys. Our society has normalized the cutting of boys and that's what I'm fighting for.But I don't want it to be a distraction from female issues, I think that's equally as important. But females are protected under the law from being cut and males aren't.