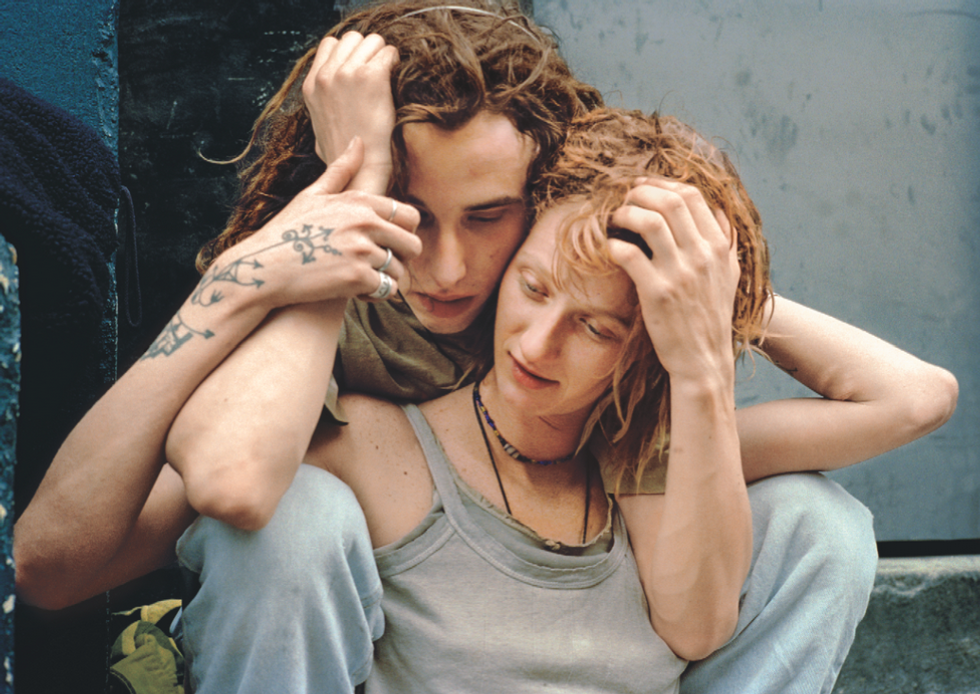 What Happened to the '90s-Era NYC Squat Communities?

by Evan Siegel
PAPERMAG
"Jill and Soi on the Stoop, Fifth Street Squat, 1994" (Photo by Ash Thayer)
Last week we ran a gallery of Ash Thayer's powerful diaristic photos from her time living in the Lower East Side squat communities during the 1990s and since then, we've been curious to hear more about the photographer's experiences during that period and what happened to some of her squatter friends. We reached out to Thayer, whose photos appear in a new book, Kill City, and had the chance to get her thoughts on squat politics, New York City in 2015 and what she hopes people take away from her images.

How'd you wind up becoming a part of the squat community?

My parents were homesteaders in Tennessee -- they built a cabin with no electricity and running water; there was an outhouse. That's where I was born and that's where I lived my first few years of life. It was there that I first had an introduction to alternative living and not being part of a financial system where you're really maxed out paying rent. I moved out of my parents' house at 17, for my senior year because I had a lot of anger, emotional issues, and strife with my parents, and moved into a punk girl house. I had become involved in punk rock culture and radical activism out of a lot of anger and hurt from being bullied, and not accepted [at school] -- being beaten up, emotionally tortured, and harassed. This was before the whole anti-bullying movement and obviously before cell phones and our whole culture where my generation is now addressing that with their kids.

I could see how it might not have felt like a huge leap to go from a background like that to eventually living in a squat community on the LES.

Yeah and to not be freaked out about [squatting] as a concept. I [came to NYC] to go to art school and living on student loans and part-time work. I had an apartment on the UES for a few months with 5 other teenagers, but we got kicked out. Then I moved out to Sunset Park, but my roommate ended up kicking me out and taking my deposit. So I had no money and literally no place to go. One of my squatter friends -- I had never been inside a squat before -- said, "hey, if you're about to be homeless you can come be my guest." You know, someone I had sort of befriended from Tompkins Square Park, or punk shows at ABC No Rio, and the Continental and all those places. I lived at See Skwat first, then on 5th St., and then at Serenity House. I just sort of fell into it, just because of this person being generous and saying "you can work on the house as payment."

Your pictures depict this set-up a lot -- residents seemed to be working and doing construction on the squats all the time.

You were building your apartment all the time and working on the politics around the building and within the city and the community all the time; you couldn't just sit on your ass. If you did, you were called a 'summer camper' and you'd probably get kicked out. It was like, "what are you bringing to the table?" Like, the basement flooded so me and this other guy had to pour sand all over it to absorb it and shovel sand into buckets and then take it up and dump it out. It was no joke construction work. You'd want to earn respect from other buildings and people in the community. We all protected each other.

How often would you run into legal issues and what would you do to address them?

Primarily our strategy was to keep the cops out. Legal trouble didn't really happen until they just wanted to come in and evict. Giuliani became mayor, and he made it his personal vendetta to get all the squatters out, by any means possible, as quickly as possible. He broke the law, several times, during evictions. There would be big showdowns on the streets: people would barricade themselves inside of their apartments and things like that, but ultimately would leave peacefully. We kept the doors locked at all times, and we would block the windows at night so it wouldn't draw attention that people were occupying it and that there was electricity and lights on.

And you would advocate on behalf of the squat community at local political meetings?

Yeah, we began protesting constantly at community board meetings. There were all these empty buildings and people need housing -- over 30,000 people were sleeping on the streets and in shelters at the time, so why not let them move in and fix it up and earn the title? But Reagan came in and said, "Oh cut that shit out, that's not pure capitalism, that's not how we roll." Basically "fuck the poor, they can pull themselves up by their bootstraps, I don't know how, but we're just going to say that and make them sound lazy." Of course, Giuliani jumped on board. He was running this total scam where he would say, "Oh we're going to use these buildings to create low-income housing" but they had this loophole where it could only be low income housing for 10 years -- after that, it could go for market rates. That's not creating low-income housing, or helping communities to develop over decades or generations. We were onto that, so we were protesting it.

Well right now I'm living in LA because I can't afford to live in NY. That's part of why I left. I love New York, and I think that there are some interesting things going on against gentrification in Brooklyn, too. But the sad part is that gentrification destroys culture -- it's NY shooting itself in its foot. If artists can't afford to live there, you end up with a sterile environment.

Are you still in touch with any of your friends from the squats? What are they up to now?

I do keep in touch with them, and many of them are traveling to be present at the book release/art opening. We're having a concert the next night, as well, with a reunion show with a band called The Dregs, which was a big part of our community. Many of them have kids, some own small businesses, some have passed away from natural causes, and there have been several drug overdoses or suicides.

What are some of the messages or ideas you most want readers to take away from your book?

At the end of the day, there are a couple of topics that I hope get pulled out of this: gentrification and having affordable, low income housing for immigrants, ethnic communities, disadvantaged people, and homeless youth. There's a crisis amongst youth and homelessness in our country that I would like to create more opportunities to talk about. I hope that those ideas don't get lost by just looking at the fun, youthful, bedraggled sort of rascals. At the same time, it's fun to talk about punks -- like, it was badass, we took over a bunch of buildings and won them! That's kind of unheard of, especially in NYC, and I'm just so happy to have been a part of it. It changed my life. But also, the book shows a cool side of the city that doesn't really exist anymore: all these kids that look really grimy...shantytowns, tattooed kids, girls dressing all androgynous -- it's fun visual stimuli.