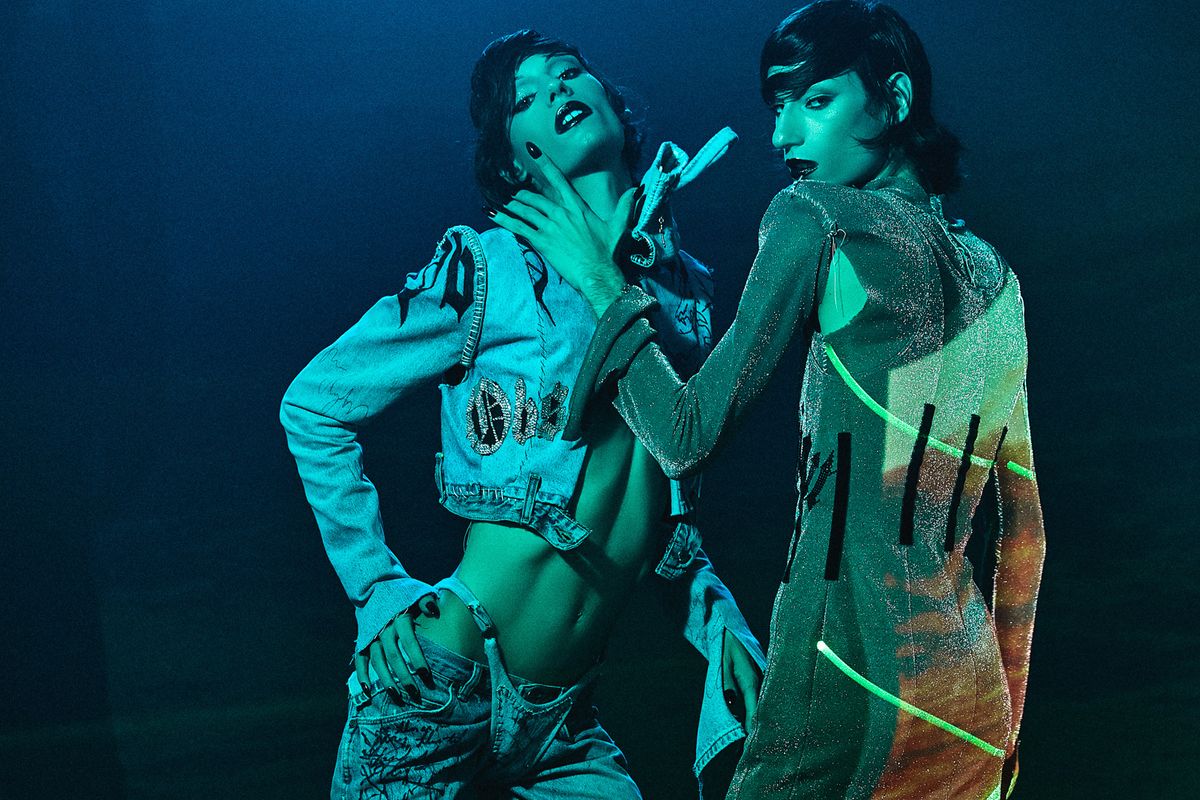 Wesley Berryman Is Your New Obsession

For New York-based Wesley Berryman, success exactly as he imagines it is not a question of if, but when. This attitude could be viewed as having delusions of grandeur if it weren't for the designer's ability to wrap you into his orbit, and almost instantly convince you that his wildest dreams are bound to become a reality. Why? Because he leaves absolutely no other option for himself.

A product of the Lady Gaga generation, Berryman has independently built a brand using much of the pop star's winning formula, only trading music for fashion. Like Gaga, he prefers to live inside a fantasy of his own creation, working everyday to manifest his visions (or transform his lies into truths, as Gaga has repeated throughout her career). He's also garnered a cult-like following, specifically within the queer community, both for his designs and commanding online presence (follow @weslah). And most notably, Berryman is completely hands-on with his craft to the point of obsession — a word the designer even has tattooed in bold, gothic letters across his stomach.

When I stop by Berryman's Brooklyn apartment, which doubles as a studio, I catch a glimpse of his obsessive nature, and one that's vital as a designer surviving in a city packed tight with competitive talent. He's prepping to relaunch his website (live today) with a brand new collection, aptly titled Obsession, and doing every step of the process by himself. Jake and Joseph Dupont (of The Dupont Twins) are Berryman's e-commerce models — and longtime muses — and he's styling them one-by-one, then shooting the brothers against a backdrop with an iPhone in his living room, pet Chihuahua Rocky close by. It's all DIY, but this way he's completely in control — exactly where Berryman's most comfortable.

In the past, Berryman's been revered for his dark, gender-neutral aesthetic, featuring primarily all-black pieces with graphic stitching, hair metal eyelets, shameless "Wesley Berryman" branding, and lace-up sportswear detailing. After landing his signature look on entertainment's biggest celebrities, from Gaga herself to Bella Hadid (in PAPER) and most recently Beyoncé, the young designer had to grapple with the reality that fast-fashion will always steal trending ideas, and manage to turn around production of those silhouettes much faster than anyone operating independently.

So like any great artist, Berryman spent some time away honing his strengths and building on those to create an entirely updated look that fast fashion can, and most likely will, continue to chase like a mindless machine. The Obsession collection, out now, then looks like a fully realized Wesley Berryman vision, with all the classic elements present, only amplified through edits that fuse Western punk attitude with futuristic stripper sex appeal and an undercurrent of ultra-glam goth a la Marilyn Manson. Sure Topshop can make a copy, but they'll never connect the dots quite like Berryman.

The word "Obsession" is printed across most pieces, some positioned to match Berryman's tat, while others are bedazzled with Dolly Parton-style bling in black or silver. The designer's lace-up trademark is slimmed down and used as trimming or piping on pieces with the edges left to fray for a grunge finish. There are shoulder pads, vinyl jackets, crucifix handbags and thongs — a skin-tight golden party dress Berryman says he dreams of Kim Kardashian wearing. Washed blue denim takes center stage in this collection, though, with hand-drawn tattoo-style illustrations that look as manic as Berryman's own incessant drive.

While his top priority is Wesley Berryman, and the tangible clothes available to purchase through his brand, the admitted Gemini eventually wants to build something much larger and more complex — an inclusive community, an all-encompassing experience. He talks confidently about developing a future party, launching unlikely collaborations, and eventually taking over the highest positions at prized fashion houses, from Versace to Alexander McQueen. But as he writes of his new collection, "Before a dream can become a reality, it must first become an Obsession."

Below, PAPER premieres Wesley Berryman's official Obsession campaign, and talks with the designer about inspirations, struggles, and, most importantly, "pleasing the Gods." For more information, visit www.wesleyberryman.com.

Tell me about the word "Obsession," which is printed throughout your collection. Why did you choose it?

I am just obsessed with everything I do. I fall in love with everything and everyone, it's all or nothing. And to be successful at anything you have to be obsessed. You've gotta make sacrifices and work your ass off, no matter what you've gotta make it happen and pour every ounce of yourself into it. Obsessing over things can quickly turn sour as well, so there is an interesting balance. This collection dips into the idea that obsession is a consuming disease if not controlled. I wanted to create clothes that would bite back if provoked but also protect you from harm.

This campaign stars The Dupont Twins, who're you're close friends with and are featured throughout your brand. What do you love about them, and why do you think they represent Obsession?

I love Jake and Joseph because they are fearless, they express themselves without holding back and they know what they want. And that's what my clothes are about: reckless freedom in the face of adversity. I think they represent the collection because they have what it takes to turn an obsession into a reality and they defy the norms of society. They aren't held down by man-made concepts like gender or society. And once we break away from all of that, we are truly free.

"I wanted to create clothes that would bite back if provoked but also protect you from harm."

Where did the idea to tattoo your denim come from?

The Tattoo Denim came very organically, I have been scribbling on jeans since middle school and I have an obsession with denim. With this collection, the drawings are a little manic and express the agony of love and desire. The feeling of wanting something so badly that it hurts.

What's the story behind the treatment for this collection's campaign?

The campaign tells multiple stories all at once. The struggle of good and evil, darkness vs. light, is at the core of this collection. When you unpack it further, the photos show someone battling their own personal demons. Shooting this campaign felt like an exorcism of my own. So I wanted to show strong, almost armored characters. I just wanted to visually express a very dark ethereal emotion that I think we all have. There aren't many words to describe it, so maybe I'm still trying to figure out just exactly what it means. I obsessed over the aesthetics of this shoot because that combined with the clothes tells the story; it doesn't need to be explained it just needs to be experienced.

It's been some time since your last proper collection. What happened in-between?

I've been working on this collection for just about a year. It has come a long way and changed so much in that time, and so have I. But I've treated this as a baby, nurturing it and incubating the ideas. I think Obsession is a snapshot of my life from this past year, all the triumphs and struggles.

What is the biggest factor you consider when designing your clothes?

Will I please the Gods?

You're truly an independent designer, and are hands-on with the clothes from start to finish. What is the biggest challenge about this?

Meeting my own expectations. I am a perfectionist when it comes to the clothes, it's all about detail and craftsmanship. It's just a challenge to adequately express what is in my head into a 3D garment.

"That's what my clothes are about: reckless freedom in the face of adversity."

You've created custom looks for some of the world's biggest pop stars, from Lady Gaga to Beyoncé. Who are you dreaming to design for next?

I love creating custom looks because I really dive into the world of that particular client when I design. I want to feel what they are feeling. I become them in order to create for them. I am dreaming of dressing Dolly Parton, she was one of my very first queens I ever fell in love with.

Who do you design for?

I hate this question because it limits what my brand has to offer to the world. It's everyone. My muses are everyone I meet or don't meet. It's my mom, my friends, and strangers on the street. They are strong and creative individuals. I want my brand to be universal and to narrow it down would be its death. I want my brand to be different to everyone who experiences it — it's like a work of art in that way, it can't be so easily defined but it can be felt and interpreted in many ways, it just depends on who is looking at it or wearing it.

You're wildly ambitious, and rightfully so. What is your biggest goal for 2019?