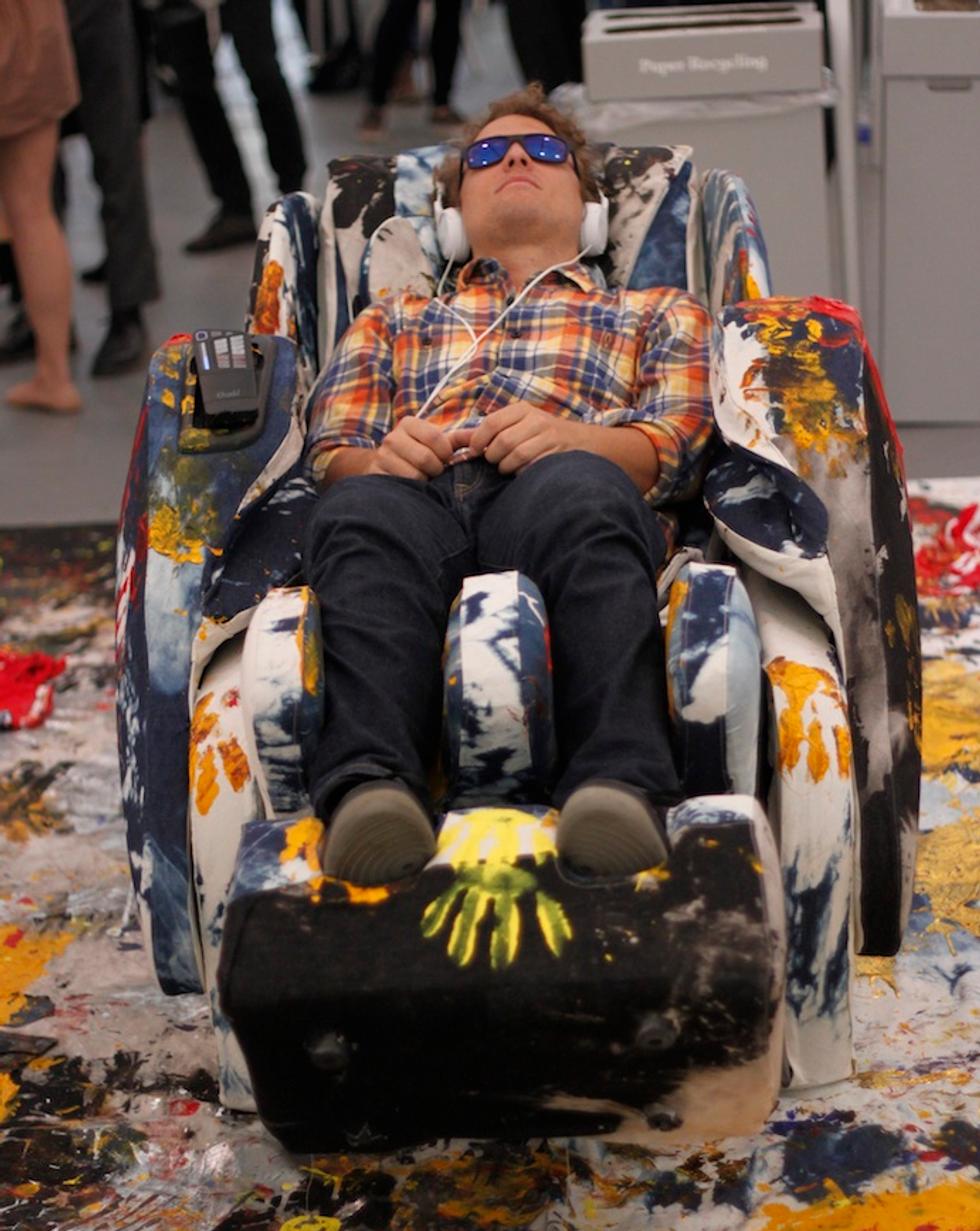 Welcome to the Art World Lord of the Flies: Everything We Saw and Heard at NYC's Art Fair Openings

In the middle of New York city's Art Week, it's hard to tell where the art ends and the party begins. Held in hard-to-access locations, like an island (Frieze) or a giant basketball court on the East River (NADA), the fairs become their own isolated ecosystems. Surrounded by so much art, so many art people, and no bodegas for miles, our primal instincts start to show. We start drinking a lot of champagne regardless of the early hour or outrageous prices. We start making bonds and alliances with unlikely fair goers. The leaders begin to emerge. And after hours of being in the same place, the panic sets in. Will you make it on the ferry back? Which one of your allies will split an Uber with you instead? Does anyone have a cigarette!? It's Lord of the Flies, but with million dollar paintings instead of palm trees.

Zachary Leener at Frieze
The day began with a ferry ride to Randall's Island for Frieze's first day open to the public. Most of the VIPs had come for the preview the day before, but there were still some collector types in attendance -- their appearance is easy to pick out in the crowd (bowties and expensive looking hats, usually). The fair had the usual onslaught of neon word art and mirror sculptures ready for Instagramming, but interesting new works by emerging contemporary talent like Math Bass and Zachary Leener gave Frieze an edge that you won't see in a more traditional setting like the Armory art fair. Even more so, a surprising amount of work had an interactive quality. Climb up a velcro half pipe in a velcro suit, take a personality test in the form of a maze created by Aki Sasamoto, sit in Korakrit Arunanondchai's paint splattered  luxury massage chairs; Frieze was like a carnival except you could buy craft beer and an artisanal charcuterie board instead of cotton candy and corn dogs.

Chloe Wise at Division Gallery
But after a while, this high-end art Ferris wheel isn't fun anymore. You miss your real friends, not just your art island allies, and you really want a taco. After a lot of anxiety over how to get back to Manhattan, it's a dream to be at the opening of NADA, the New Art Dealers Association contemporary fair held at the East Village's Basketball City. Free to the public and hosting a slew of young galleries showing exceptional emerging artists, NADA is like the Brooklyn of art fairs. There was a relaxed atmosphere where artists, gallerists, collectors and viewers co-habitated, milling around the booths with considerably less anxiety than Frieze.


Siebren Versteeg at Bitforms gallery
Many artists showing at the fair like Chloe Wise, Daniel Heidkamp, and Genieve Figgis were in attendance, hanging out drinking on the East River, listening to a mariachi band play. From Corey Escoto's polaroids at Regina Rex, to a great collection of works including Figgis and Heidkamp at Half Gallery, to a painting robot by Siebren Versteeg at Bitforms gallery and a giant vagina painting by Betty Tompkins at Louis B. James gallery, the variety of work was as satisfying as the fair's overall unpretentious vibe.