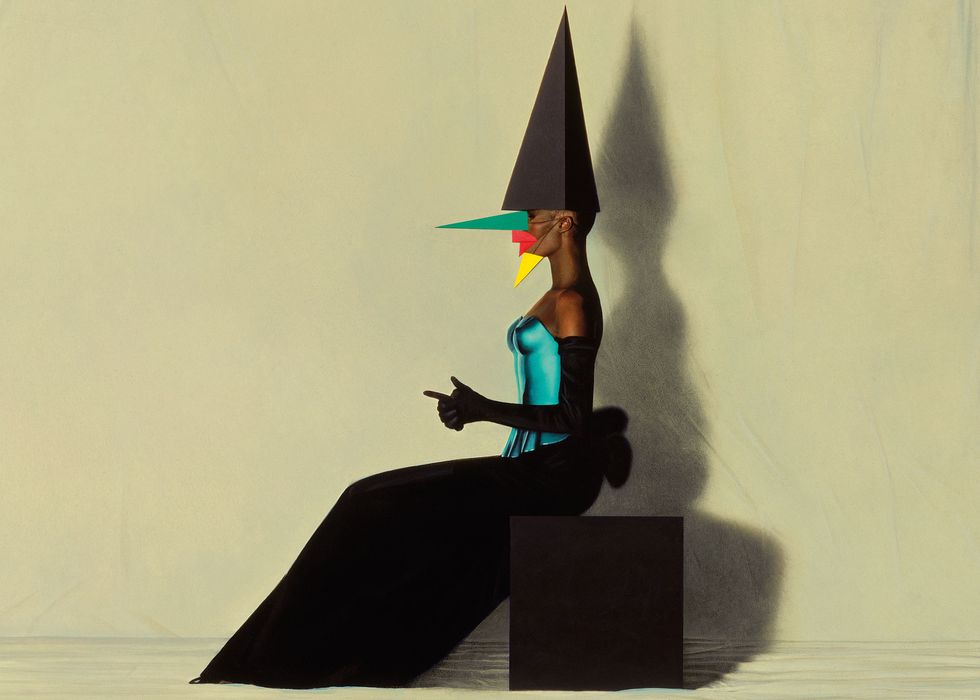 by Sandra Song / images by Jean-Paul Goude
PAPERMAG
On the auspicious eve of the super blood moon, Grace Jones took to the Hollywood Bowl stage, decked in an elaborate gold skull headpiece and slathered in black-and-white body paint. The landmark show, which featured several costume changes and also moments where she performed nearly nude, found Grace performing for an audience of aging club kids, pop art adherents and a younger generation of new fans, all dying to catch a rare glimpse of the larger-than-life personality that's been the figurehead for American outsider culture for the past four-plus decades. It's safe to say they got an eyeful.

"I didn't make it stand up hard intentionally!" she guffaws on the phone, describing the tribal-pattern strap-on she wore the night before, continuing to giggle as she insists it wasn't a controversial publicity stunt at all. "It just was like, 'No! Go to sleep, dildo dick,'" prefacing this all with the innocent assertion that, "I'm [just trying to] play the role of a naked guy in an Ibo tribe, Keith Haring body paint." And while it's hard to think of anyone's grandmother (especially in what Jones believes is our current "sexually repressed" society) partaking in the sort of outlandish sex toy-slinging she seems to delight in, one must remember that Jones is hardly anyone's idea of a typical human, let alone a typical sexagenarian -- a fact that's made abundantly clear in her new memoir, I'll Never Write My Memoirs.

As recounted in Memoirs, Jones is a legendary triple-threat, one who successfully straddled the underground and mainstream. Known for her gender-bending look and willingness to challenge racial and sexual norms at the height of '70s/'80s New York, she started as a model and gradually emerged as one of new wave's wildest outsiders with chart-toppers like "Slave to the Rhythm" (1985) and "La Vie En Rose" (1977). Jones eventually took her radical look to the silver screen, where she progressed from campy horror flicks to huge commercial releases Ã  la Conan the Destroyer (1984) and the James Bond film A View to a Kill (1985). For the past few years, though, Jones has maintained a relatively low profile, spending more time with her family as a grandmother while still playing the occasional show as she works on another album.

In her absence, a younger, boundary-averse generation discovered her and held her up as an early icon of popular modern social movements like gender-fluid fashion and intersectional feminism. Tumblr kids can't reblog her photo collaborations with former creative and romantic partner Jean-Paul Goude enough. It makes sense that she would be the face of Warhol-era New York to the younger set; if there's one thing she became known for, it was being unapologetically outspoken in her otherworldly beliefs.

Libertango, painted photo, New York, 1981. Â© Jean-Paul Goude
Jones is a creature of her own making, one that lives in a forward-looking world of her very own creation; one that transcends time, space and, of course, social constraints. When talking with her, it quickly becomes evident that she's left our Earth in favor of her fantasy world. She's completely unplugged from the very modern, web-bred social movements and cultural touchstones that she had a huge hand in creating -- from the popularization
of androgyny and agender style to our collective embrace of the black alternative female pop star.

Though, who can blame her? It's not like Grace Jones needs the Internet, something she says she deliberately "unlearned a long time ago" because she didn't appreciate the blurring of boundaries and the not "knowing what's real. I just find that it's a lot of shit to sort [through], and I don't have time," she demurs dismissively. "So I just don't indulge in it at all."

However, it is surprising that she's unplugged to the point that she has no idea about viral web-based movements Ã  la Black Lives Matter or Say Her Name, something that's reaffirmed by the fact that I spend several minutes insisting they're real things, all while explaining what exactly a "hashtag" is. "I'll have to look it up!" she laughs good-naturedly. Race is something she attempts to brush aside in conversation in favor of optimistic "universal love" rhetoric, seeing as how "we're all human beings and that's it, so I don't even go there."

It may be disappointing to the young, mostly progressive fan base drawn to her outlandish, construct-defying legacy, but her stance makes sense for someone occupying the sort of inward-looking, self-imposed isolation she seems most comfortable in. In her mind, as a citizen of outer space, she transcends racial boundaries; she is a powerful being that is bigger than any classification skin color could bestow on her. Instead, it's all about universal themes like maintaining a positive mindset and speaking your own truth at all times -- things far beyond petty social constructs.

"I think [political correctness] is the worst term ever. I never liked it," she says, likening it to fascism in the sense that she believes it staunches free speech. "I'm pretty radical about this politically correct bullshit, because it's the complete opposite of freedom." Everything she says makes her seem like a removed observer of humanity in all of our self-imposed war, disaster and pain, a position she seems to intentionally attempt to enforce as a self-proclaimed "alien."
It's something that differentiates her from the carefully constructed personas of modern pop stars like Rihanna, Lady Gaga and Miley Cyrus, who she directly addresses toward the end of her memoir for "already being like me," asking them, "Have you become someone else, without really knowing it? Do you always have to stay in character for people to like you? Do you know that you are in character?"

As such, it's not surprising she also has a problem with the man who embodies the idea of the ultimate music star turned mogul -- Kanye West.

"Kanye has been ripping off stuff from me and Jean-Paul Goude for a long time, so it was no surprise to me," she says. "I believe they would've done it anyway, and I believe Jean-Paul when he said he'd rather rip himself off than have someone else rip him off."

Blue-Black In Black On Brown, painted photo, New York, 1981. Â© Jean-Paul Goude
After all, according to Jones, Kanye is responsible for paying homage to several of their iconic ("I hate that word") images, using his then-girlfriend model and activist Amber Rose in renditions of Jones' Island Life album art and images from Goude's Jungle Fever book for Complex magazine in 2009.

"It's so like, 'I can't beat him, [so I guess I'll try to] understand him,'" she says, slightly exasperated. "But he did it with somebody else and really badly."  Though when we circle back to the topic of racism and the backlash our Kim Kardashian cover caused (which Goude also shot and which referenced a 1976 image of African American model Carolina Beaumont shooting champagne over her head), Jones scoffs -- caught off-guard by the fact that people are still interpreting Goude's work that way. Though Jones wasn't the inspiration for Goude's Kardashian cover, much of the discussion surrounding that image and its perceived exploitation of the black female form was focused on Goude's photos of Jones over the years -- including a picture of her in a cage on the cover of Jungle Fever.

"The work [Jean-Paul and I] did together, people were calling it racist," she says. "It wasn't racist at all. It was him basically putting me on a pedestal, really," explaining that no matter what the intention, there would be someone eager to point fingers and deem something "problematic" -- even if she can only see the positive intent, staunchly defending his work.
"There's a lot of humor in that picture in that original, (with) the champagne popping off," she says, audibly shrugging it all off once more as she allows her rich laugh to engulf the tail end of our conversation. "As an artist, you know, he probably just wanted to have an ass like that."
Go here for more about our Nowstalgia issue, on stands October 20th. And stay tuned for our second awesome cover on Wednesday!