The Hypocrisy of Red Carpets Under Climate Change

The Golden Globes are unique for a number of reasons. Most obvious, they're the awards season starting gun, kicking off festivities which will eventually culminate in the Oscars on February 9. There's extra fun to be had when TV and film stars gather in the same room together, and the alcohol tends to flow more freely. (Check out this Liz Taylor speech from the 2001 ceremony for proof.)

It's also a super important night for stylists in that they're going to be introducing new eras for their high-profile statue-chasing clients. Think: Timmy at last year's Globes wearing the custom Louis Vuitton sequined harness. They want wow factor, but it's also a long game, so they can't pull out all the stops or they risk sputtering out too quickly. So Sunday night was bound to be an indicator for who we'll want to keep our eyes on this season in terms of the fashion story — not just the fashion moment. Fashion is a language and Sunday night's ceremony was an opportunity for so many celebs to reintroduce themselves to us.

So how did they do? Let's start with the ceremony itself, which seemed like counter-programming to the buoyancy of the carpet.

Often colloquially referred to as the Oscars' more boozed-up younger brother, the ceremony itself took a hard left during Sunday evening's 77th edition. Despite Ricky Gervais' effort to curtail political speeches ("If you win, come up, accept your little award, thank your agent and your God and fuck off," he told the crowed during his opener), stars used the stage to broach topics from climate change (Russell Crowe) to US-Iran tensions (Patricia Arquette), even abortion (Michelle Williams). Most prominent were mentions of the devastating Australia wildfires, which came from Cate Blanchett, Pierce Brosnan and Ellen DeGeneres. Crowe was absent from the ceremony entirely because he was with his family at home, battling the blazes.

The red carpet, in contrast, was much cheerier. Two years after the "blackout" of 2018, a coordinated protest to raise awareness for Time's Up, the night was sartorially devoid of outright political statements. Two outliers were The Crown's Olivia Colman and Tobias Menzies, who both wore button rings that read "50:50 Equal Representation for Actresses." 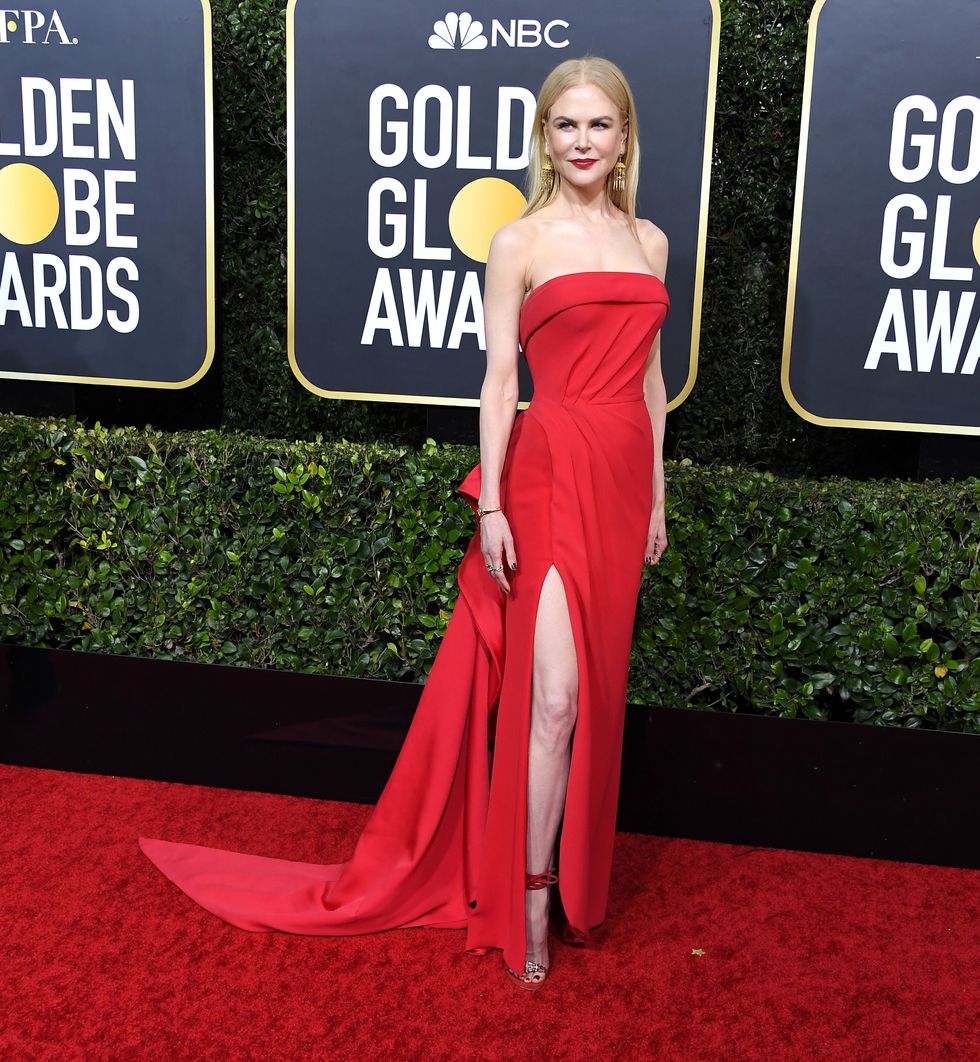 Despite the bright hues, there was an undeniable blandness to what was being served up on the carpet. Gucci, Louis, Fendi, Prada. Where was the Christopher John Rogers? The Peter Do? The Molly Goddard? The Pyer Moss? The Bode? Where was the unexpected and new? There were flickers: Joey King in Iris van Herpen, Kerry Washington in Altuzarra, Cynthia Erivo in Thom Browne, even GOOP in midriff-baring Fendi. But for the most part, the carpet seemed inundated with, as Aretha Franklin would call them, "great gowns; beautiful gowns."

That's not to say those beautiful gowns aren't special. Golden Globe-winner Renee Zellweger was tailored perfection in her Armani, as were Ana de Armas Ralph & Russo and Helen Mirren in Dior. But "beautiful" fixates itself in the memory far less snugly than something with a bit more je ne sais quoi. The trends were expected: big puff statement sleeves on stars including Beyoncé, Jodie Comer to Dakota Fanning, mesh paneling seen on ScarJo and Zoey Deutch and tulle for days on Kirsten Dunst, Sofia Carson and Thomasin McKenzie. We needed a Billy Porter in his gasp-inducing Christian Siriano tuxedo gown from last year's ceremony, and yet...

But the most glaring issue I have with this year's carpet is the sustainability — or lack thereof. The Hollywood Foreign Press went to great-ish lengths to make addressing climate a top priority by taking meat off the menu. ("We felt challenged to do better," HFPA President Lorenzo Soria told CNN.) And as mentioned, climate change was a big topic during the ceremony itself. But where was that energy on the red carpet, which saw many stars stepping out in custom looks, created especially for this ceremony, most of which will never be seen, let alone worn, again?

"I think it is a good idea that 800 people are trying to save the planet and arriving all in separate limos to have some veg," Gervais joked. The same snarky criticism could be made of the celebrities' fashion choices, which failed to position themselves within the larger conversation of wastefulness. We need more stars like Padma Lakshmi, who had previously worn her 2018 Emmys dress on another red carpet. Tiffany Haddish received praise all the way up to the New York Times for re-wearing Alexander McQueen on various occasions. Where was this energy last night?

Lastly, we need to acknowledge the Dolce & Gabbana of it all. After the laundry list of scandals felt like it had crescendoed with not a single star wearing the brand at the 2019 Oscars, the brand made an earnest comeback by being worn by Sofia Vergara and her husband Joe Manganiello as well as Sacha Baron Cohen. To quote Thorgy Thor: "Ugh. Jesus. Gross." It seems, in the case of GQ writer Rachel Tashjian's 2018 question of "Can we ever cancel Dolce & Gabbana?" the answer, for now, remains no.

Was the 77th Golden Globes a red carpet a disaster? Hardly. But did it create the necessary momentum to jolt us into excitement for the awards season to come? I'm not convinced.

Welcome to Wear Me Out, a column by pop culture fiend Evan Ross Katz that takes a look at the week in celebrity dressing. From award shows and movie premieres to grocery store runs, he'll keep you up to date on what your favorite celebs have recently worn to the biggest and most inconsequential events.

All the Looks on the Golden Globes Red Carpet

All the Golden Globe Nominees and Snubs