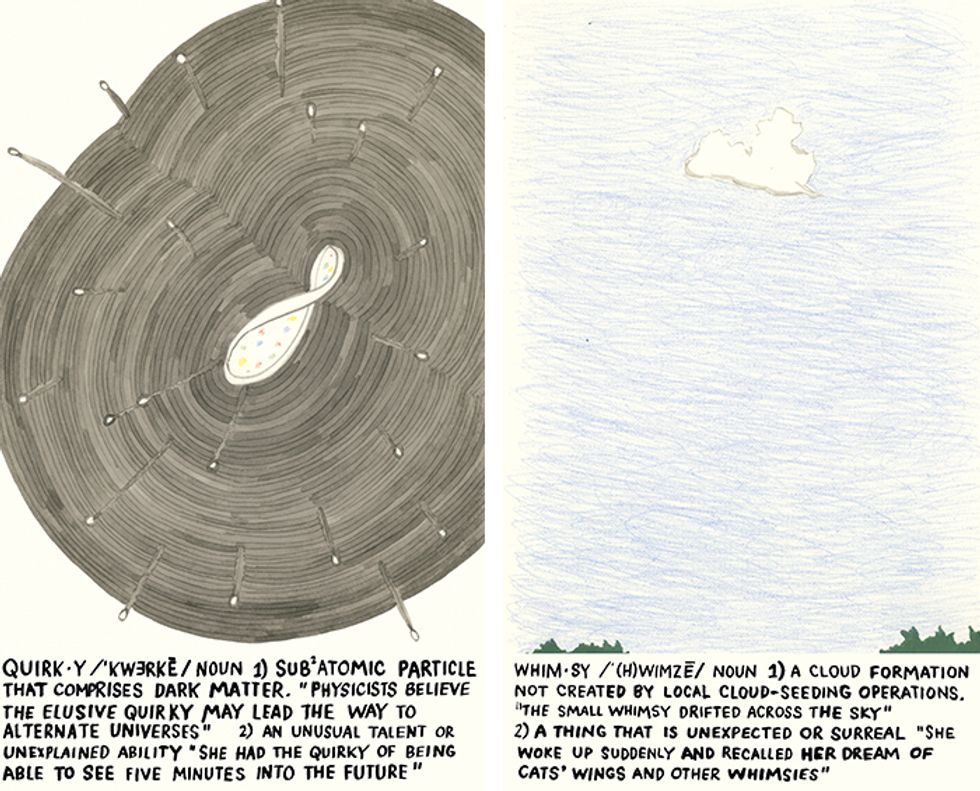 "We Wanted to Carve Out a Vision of Not Just What We Can Have, But What We Should Have": Inside 5 American Utopias

by Brian Heater
PAPERMAG
Rabbit Island, photographed by Rob Gorski
Utopians are a diverse bunch. There's little agreement to be found across the broad landscape of individuals striving to transform society, save for two important factors. First, don't call them utopians; most of them hate that. Second and more important is the consensus that
society is fundamentally -- but not irreparably -- broken.

For many, the answer is to scrap it and start again. And there's some real hope that, given our collective knowledge, capabilities and hindsight, perhaps we can actually build a near-perfect world. Of course, the notion of what constitutes perfection is every bit as diverse as the individuals involved -- and so too is the question of what went wrong in the first place.

We reached out to five wildly different American organizations. Some are utopias of the mind; some are deliberately transient; one hosts a signature event called the "Strap-on-a-thon." Each is fascinating in its own right, and each offers a valuable lesson about how things could be different.

Rob Gorski bought his perfect world on Craigslist. "I happened to be at jury duty in lower Manhattan," explains the New York City doctor. "It was a Jewish holiday and no court cases were being argued. For some reason, my mind went to northern Michigan, because I have family ties there. I was poking around and it was complete luck that I saw a listing for an island."

After some hesitation and strong discouragement from concerned friends, Gorski purchased the 91-acre swoosh of forest -- located in Lake Superior, the world's largest freshwater lake by surface area -- deeming it the perfect laboratory for some high-minded concepts regarding land development, society and art. The island became the namesake for the Rabbit Island Foundation, a nonprofit devoted to rethinking development. As a Manhattanite, the notion of continual subdivision is particularly troublesome to Gorksi.

He handily refers to Rabbit Island's driving principle as "conservation 2.0: the marriage of the Google map with Kickstarter and the nature conservancy. Using those three concepts, we look back on the history of our mistakes and try to figure out how we're going to redefine land use." Gorski asserts that technologies like satellite mapping and online crowdsourcing efforts, when combined with lessons learned from generations of land mismanagement, can lead to better models for land usage.

The space is also home to the Rabbit Island Residency, a rolling community of four to six artists a year representing disciplines from filmmaking to architecture to cooking. "We're creating a culture to give the artists the opportunity to come and spend time on a wilderness island. You have fear, boredom, awe, fish, lake, water. These rare things that we never get to experience anymore, you have them all in one setting."

It's hard to believe that, just nine years ago, Burning Man couldn't count a queer women's group among its ranks of hundreds of theme camps. There was no space at the weeklong celebration where lesbian and trans women could go to escape the trappings of male-dominated society. "Just as it is in the regular world," says the group's de facto spokesperson, who goes by the name of Glo.

Glo describes Camp Beaverton with the sort of reverence most often reserved for nonexistent places. But since 2007, it has been very real, if only for one week a year. "You can be whoever you want to be," says Glo. "You can dress or not dress as you want. You can explore your own boundaries."

At the center of it all is the Beaverdome: "a 35-foot geodesic dome that is for women only, trans-inclusive. It's beautiful lighting and fans and pillows. You can lay out and there's safer-sex supplies. You can come and get away from the energy of Burning Man, which is similar to the energy of the world."

Once the week is over, Camp Beaverton, like the rest of the festival,  is broken down and packed away. "That temporary nature is really important," Glo adds. "After the week, it's all gone to dust, and you take that with you. And you also get to connect with these people the rest of the year. It's realizing that there are a bunch of amazing, crazy people who're just like you. These people that I have been camping with for the past seven years are some of my best friends -- my family."

"If you're going to break away from your government and found a new government," explains Joe Quirk, "you are, by definition, a libertarian." The Seasteading Institute has no official political position, but the philosophy has deep roots in the nonprofit, thanks in no small part to Patri Friedman, the former Google software engineer and grandson of American economist Milton Friedman.

Quirk, one of two full-time staff members and a self-proclaimed "seavangelist" who quite literally wrote the book on seasteading (due out in 2016), met Friedman at Burning Man some years back. "Patri explained that on a fluid frontier, if citizens are mobile, you would have governments competing to attract citizens," says Quirk.

The underlying concept of seasteading is a society of dwellings that can float from place to place -- a watery free-market society whose citizens drop anchor with the nation best equipped to suit their needs. What sounds like the basis of a Kevin Costner film took its first steps toward legitimacy in 2008, when Friedman co-founded the organization and garnered the attention and funds of Silicon Valley.

It's fitting, then, that he describes the institute's mission in tech startup terms. "Seasteaders bring a startup mentality to the problem of government monopolies that don't innovate sufficiently," Quirk explains. "I think of seasteading as a technology to let future governments evolve with a speed akin to other technologies."

The institute has already begun taking its first steps toward life on the waves. "We've initiated our Floating City Project," says Quirk. "That will be modular platforms floating in the territorial waters of a host nation, which will grant us substantial political autonomy." He also describes negotiations with multiple host countries, though he's unable to name names. "If these succeed and are economically and environmentally sustainable, it will set a good example that will attract innovators to solve the deeper engineering challenges of being on the high seas."

"I'll be here," Jeff Stein writes as we plan our interview, attaching an image of a sunrise over a lush valley and the words, "78 degrees." Stein's not above a little bragging when it comes to Cosanti, a foundation he's been involved with since 1975, or Arcosanti, the "urban laboratory" it administers.

The foundation is the seemingly impossible dream of Italian architect Paolo Soleri, who arrived at its name by combining the words for "things" (cosa) and "before" (anti-). In 1970, Soleri began construction on a seemingly inhospitable patch of land in central Arizona, 70 miles north of Phoenix. The space would become home to Arcosanti, the experimental community Stein calls home, along with 80 or so year-round residents. "At that time, it was some really empty desert," explains Stein. "It allowed Paolo Soleri to begin making experimental buildings that had these spaces that connected them. It was an example of how you could live in the Sonoran Desert without burning a lot of fossil fuel to warm or cool yourself."

Arcosanti was unquestionably ahead of its time, a study in developing a society focused on sustainability. "It's an organization that thinks about issues in the opposite way of the Nike slogan, 'Just Do It,'" Stein laughs. "The Cosanti slogan might be, 'Just Think About It.' Think about how many resources are necessary, how it's going to change the lives of the people involved in it right now and what it's going to do to people seven generations out."

Arcosanti boils down to "understanding where you are and how to live in that place," Stein continues. "Not importing single-family houses out to the Sonoran Desert, but using your imagination and lessons from other life forms who are already living in the desert to create architecture that works in its place."

"The idea for this project started a few years ago while Alexandra and I were undergrads and both of us were working on feminist causes that we care a lot about," Rachel Kauder Nalebuff begins. "We realized as we graduated from college that we would probably spend the rest of our lives fighting to maintain these basic fundamental rights. We were curious what it would mean as feminists to be fighting for demands that were actually visionary."

Nalebuff, who published a best-selling anthology of first-period stories at age 18, teamed up with Alexandra Brodsky, Feministing editor and founder of the student-empowerment organization Know Your IX, to launch the Feminist Utopia Project. Together, they started asking feminist writers, artists and activists to articulate their notions of the perfect world -- forgetting, for a moment, the real-life obstacles.

"We're not trying to trivialize the work of maintaining rights," Brodsky explains. "But we just felt that, because navigating today's political landscape is about making compromises and choosing between decisions that someone else has laid out for you, misogyny wasn't just restricting our day-to-day lives; it was restricting our imagination. We wanted to carve out a vision of not just what we can have, but what we should have."

In October, the project becomes a book titled The Feminist Utopia Project: 57 Visions of a Wildly Better Future. And while the pair might not be building an actual utopian stronghold anytime soon, Brodsky suggests that the exercise might be just as helpful.

"The writers, artists and organizers that contributed to the book, they're living in the real world," says Brodsky. "They're being catcalled on the way to work where they write about a world without catcalling. By giving contributors the freedom of not being politically feasible, that allows people to build their own islands in their minds."