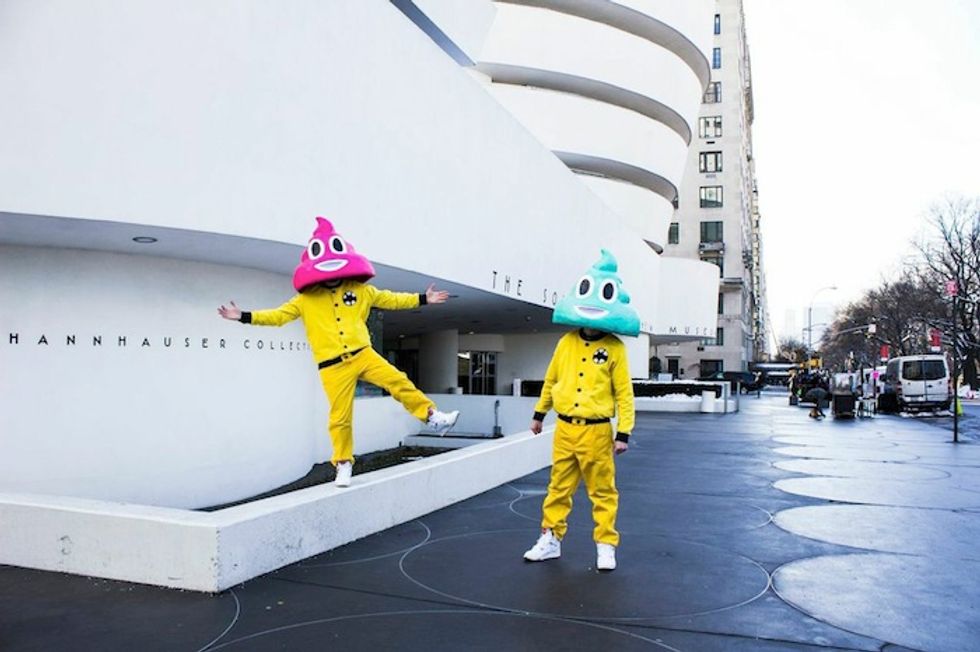 We Walked Around New York City With Two Shitheads

text by Kate Messinger / photos by Elena Polson
PAPERMAG
Hungry Castle's Dave Glass (left) and Killian Cooper (right)
"You guys look like shit!" a construction worker yells from across the street. Dave Glass, giving a thumbs up, yells "thank you!" in an Australian accent muffled by the giant paper mÃ¢chÃ© mask covering his head. Even in New York, this is not a normal response to street insults, and especially not at 10am on the Upper East Side. But it's hard to know what to expect when you're hanging out with two guys dressed like giant, smiling poo emojis.

Glass, and his business partner Killian Cooper, the tall Irishman with the turquoise poop head bobbling around, are the self proclaimed "shit heads" behind the Barcelona-based creative agency Hungry Castle. An internet meme dream come true, Hungry Castle takes the viral characters from our browser history and recreates them as three dimensional public art. Shown at music festivals and art events around the world, the work is weird, interactive and large scale. "Our ideas are big and crazy and we are trying to make noise all the time," says Cooper, the vacant oval eyes of the mask starring joyfully and blankly ahead. "We want people to notice and be part of the action." And it's hard to resist interacting with installations like a giant blow up head of Lionel Richie, which you can crawl inside of or a 12-foot "Laser Cat" that projects public artwork from its eyes. The agency's hilariously cheeky clothing line, Cool Shit, is both an extension of Hungry Castle's free public art projects and an easy way to fund them. With hats and t-shirts featuring Internet icons like Bill Murray, Game of Throne's Hodor, Lionel Richie's head and most recently, the infamous poop emoji, the clothes beg to be Instagrammed, hashtagged and reblogged.

"We want to create art for the world," says Glass, who started Hungry Castle in 2011 after working in advertising for twelve years and feeling he had hit a creative wall. It was originally a graphic design studio that threw parties on the side, but when Cooper joined after answering Glass's ad for an artist, the two connected on their pop aesthetic, scatological humor and desire to make art fun. Their first theme was, naturally, sausage. BudiClub, a recurring party that celebrated the Spanish delicacy of butifarra sausage with meat-themed art and activities, was held in an old deli in Barcelona, and brought together artists, models, musicians, food lovers and butchers alike. "We started to see that making art outside of the four walls, making it accessible, was more interesting," explains Cooper. "We fired all our clients and we started doing public art."

"We work very seriously but we don't take ourselves too seriously" says Glass, and although many of the themes might be thought of as slightly immature, the production value of each project is nothing but professional. Now, four years later, the duo has expanded from the sausage scene with a refreshing juxtaposition between low-brow humor and a high-brow work ethic. Hungry Castle is making a name for itself in both the art world, with funding and support by establishments like the Art Directors Club, as well as recognition in the international party scene. "Our work can be quite polarizing, this love/hate, art/not art thing," says Cooper. "It asks the question: is it cool or is it shit?"

With installations at the UK's Bestival music festival, Barcelona's OFFF design fair, Art Basel Miami Beach, and many more to come including a very special project to be released at this summer's Bonnaroo, Glass and Cooper aren't looking to define themselves as just one thing. They are always open to taking their work outside of the gallery setting, and even prefer the festival scene. "It's an instant audience," says Glass. "If you have your work in the Guggenheim maybe you have about 20 people looking at it at a time, but at a music festival, it's 70,000 people! It's not passive, they want to play with it and get inside it."

With only a couple hours in the city before bringing Laser Cat to Washington DC for a special party featuring DJ collective Thievery Corporation, Glass and Cooper are hoping to introduce the emoji poo as not only a new theme for their public art projects, but as a permanent mascot for the Cool Shit brand. "Normally there is a lot of thought that goes into our ideas," says Glass, "but with the poo emoji, it's just a poo emoji. It's one character, not even a word, and it says so much and so little at the same time."

Standing in front of the Guggenheim Museum in their signature yellow jumpsuits donning the Cool Shit logo, the colorful swirls of the recognizable poo heads almost mimic the soft white spiraling of the museum. Although Frank Lloyd Wright may be turning in his grave, the passing tourists, construction workers, private school kids and street vendors seem to get a kick out of it. Some confused Southerners snap photos from the museum line and whisper about a potential flash mob. A man wants them to take a picture with his "famous" dog. A group of young boys in uniforms ask what flavor ice cream they are (strawberry and pistachio, of course). The only person not entertained is the museum security guard, who conceals a smile when she asks the grinning poops to move it along.

"It's funny and it creates affection," says Cooper of the costumes. "We want to make art that creates affection, no matter how weird it is." Maybe it's the refreshing burst of color in the cold white city, our inherent affinity for poop jokes, or just the engaging energy that Cooper and Glass emote through their brand and their masks but it seems that the emoji poo brings out a happiness in New Yorkers that has been frozen for a long time. People want to engage with the ridiculous smiling turds, even when they're taking up room on the subway with their too big heads or crashing into tables at a crowded Starbucks. "It's two things that don't belong together: a poo and a smiley face," Cooper says. "But it works and it's us. We are shit heads, just trying to make art."