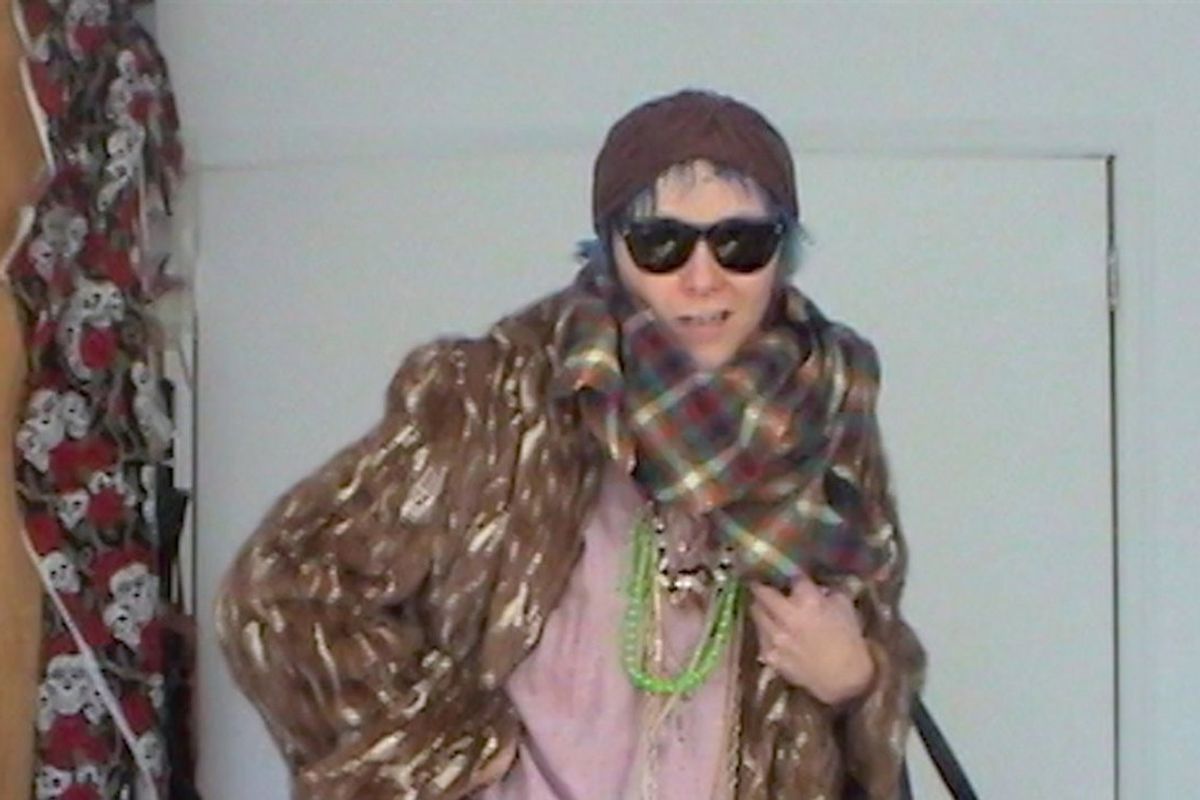 Over the weekend, artist K8 Hardy made her cinematic debut at MoMA's Doc Fortnight with the North American premiere of Outfitumentary, a film which chronicles her personal style and its marked evolution in post-9/11 New York.

Fifteen years in the making, the film is equal parts fashion vlog meets cultural commentary and simultaneously acts as a testament to the existence of "a young lesbian feminist dressed in her coming of age" in a rebellious act that predates contemporary selfie culture. Similar to the way many underrepresented communities (from POC to queer people) use social media today to create their own narratives, it's a film that reminds us that you can make anything interesting -- with or without the help of the gatekeepers. Peep our Q&A with the one-woman show about everything from the film's beginnings to making the mundane intriguing, plus some prime outfit inspiration courtesy of Hardy herself.

Could you tell me a little bit about where you got the idea for Outfitumentary?

I was shooting a lot of video at the time, and...I knew my style was interesting and time-based, and I wanted to document it. But it also came from wishing I had seen that from a past generation. I wasn't thinking it was going to be this big artwork. At the time, people weren't interested in that, and that would've ruined my career if I had been making this thing. In my mind, I thought, "I could give this to an archive when I die" or "Maybe this will be interesting in 30 years." I just knew that it wouldn't be interesting unless I did it for a long amount of time, and if I was accumulating the video images I would need to have some kind of structural consistency for it to be comparative and for you to see time changing.

I'm kind of curious as to why you would say that it would ruin your career.

I just didn't think that it could be artwork. That's kind of a hyperbole. But I just thought I was making a document in the beginning. And then after four or five years, I thought that it was interesting, although it might not really be interesting until maybe 2040. And then when the selfie phenomenon came up, I thought, "Okay, I think this is interesting now." I sat down a year and a half ago to look at all the footage, and I hadn't looked at it at all over the 10 years. I had just been accumulating it.

What do you think of everyone documenting their personal style now -- and how it's become this huge cultural staple?

It's endlessly fascinating to me. I don't necessarily think it's good or bad, but I also think that we've been so inundated with advertising images -- and something that younger generations maybe don't understand is that you [used to] only see one kind of body type in media and on TV -- so in a way, there's something empowering about representing yourself, you know? It's almost like you need to put your own images out there. Now, the balance is starting to shift in terms of body fascism, or whatever. But selfies are a way of changing the narrative.

Personally, I think it has had a huge effect on the queer and POC communities. It has definitely elevated everyone in that community to another level.

It's self-representation! Before it was just a bunch of assholes and body fascists producing imagery...only they had the access or money to make nice photos, but now everyone has access.

Has anyone compared you to other artistic forerunners to selfie culture like Cindy Sherman? What do you think of that comparison?

It's fine. To me, it's like if you're a painter and you have a similar palette to another painter in your generation, you get compared. If your palette is your own self and photographing yourself in dress, hair, and makeup, then yeah, there is a similarity. It doesn't bother me. I don't need to be unique or think that I'm doing something brand new. I think that's where a lot of people get stuck as artists, you know? Usually when I'm told that, it's usually a critique -- as if I was copying her or something. That's not really what's happening, but people are gonna think what they want.

Going back to the documentary, were there any particular things you did for each documentation? Certain poses or shots?

Maybe this is a byproduct of me growing up in selfie culture, but I feel like if I did a project like this, I would make sure I was in my cutest outfit and that my makeup was perfect. Were you self-conscious knowing other people would see this? Did that feeling play into any of the film?

It was really a different time, and it was shameful, in a way, to be videoing yourself and be posing in front of the camera. There wasn't much self-consciousness because, honestly, I wasn't sure anyone would ever see it. I didn't know what I was doing it for. Even when I sat down to look at it, I thought, "It could be shit -- whatever, we'll see." But [throughout the film] you can see my comfort with the camera grow, and then me getting totally bored. I knew I was recording myself and that it would be seen at one point, most likely. It's a very honest document.

I'm also kind of curious about your editing process. Was anything left on the editing floor?

Nope. I tried to stay true to the integrity of what I wanted to capture at the time. It was hard, too, because a lot of the stuff is embarrassing.

Is there a particular outfit you're embarrassed of?

I'm not going to say. But there is some music and things that I do that I'm like, "Oh my god." But I have to include it! So I just edited it so you could get the spirit and the integrity of that moment, and I really tried to focus on what I was doing then. I could've made an edit that was much more complimentary of myself, but that's not the point.

Could you briefly describe how you think your style has evolved from the beginning of filming to now?

How I [saw my style] evolving was kind of opening up to patterns and skirts and dresses -- more eccentric. I just see it getting more complex as time passed. You live in [New York City], and it's not like people are shaming you all the time for looking like a freak or eccentric, so you can develop your style easier. I kind of see it developing, but there are a lot of consistencies. There are also a lot of cowboy boots. I ruined them because my basement got flooded. I lost all my shoes one Summer.

Wow, that's lame, but I hope that made it into the film. A narrative twist and whatnot.

The narrative is outside the film. It's not fun for people to watch because you just start writing the story in your mind. You're hearing voices and you're seeing the background change, apartment change, my hair change. In the beginning, I call it my "Outfitumentary," and my intentions are really to document what I'm wearing. But in the end, the video quality is so shitty that it's not like you can see it that well. You can see silhouettes, but there is so much you can't see. My iPhone is better than what I recorded that on for 10 years. It's more of a self-portrait, and it's much more about the interior space and the time and music. It all comes together.