Wayne Coyne on GoogaMooga: "I'll Stand There and Sing Emotional Songs to People Who Are a Little Drunk" 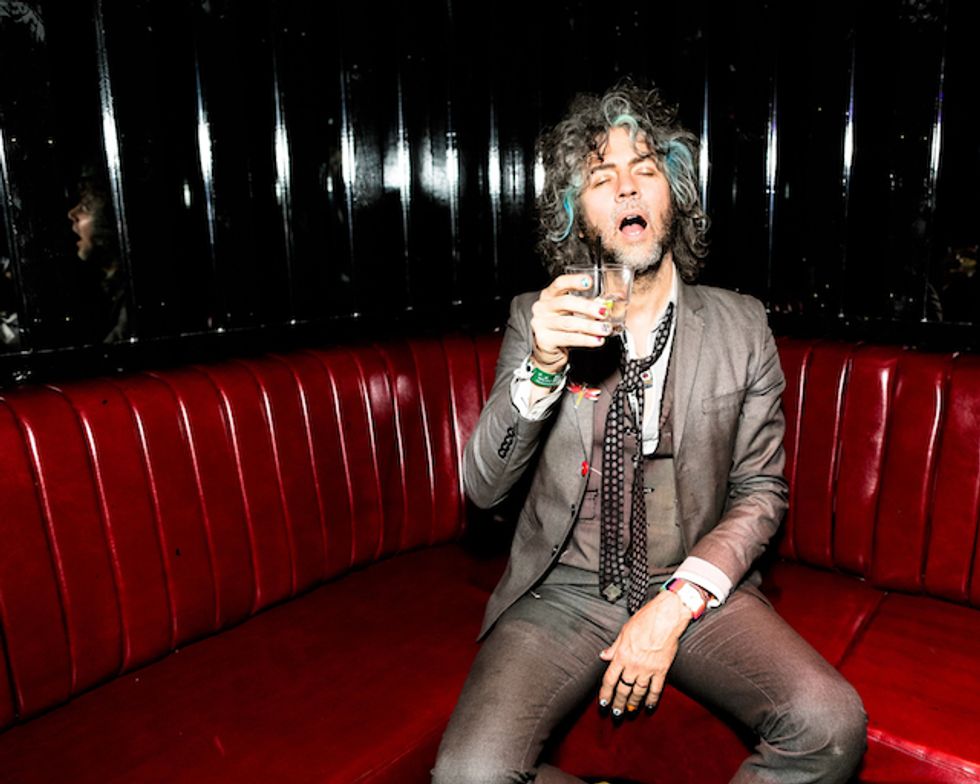 "I kind of like Las Vegas now. It's over-the-top, and that's appealing," says Wayne Coyne when I tell him I'm calling him for our phone interview from outside a gimmicky restaurant in the Mandalay Bay Hotel. "It's a place that's better when you're older and have more money." The Flaming Lips frontman -- who, over his band's 30-year career, has performed in everything from "blood"-splattered white suits to a giant (and patented) clear plastic "space bubble" -- is certainly one who gravitates towards the over-the-top.

Coyne, in New York for tonight's performance at the kick-off event for the Great GoogaMooga in Prospect Park, as well as last night's concert at the Wellmont Theatre in New Jersey, had a few minutes to spare on set at the Jimmy Fallon Show ("I have to warn you, it's loud in here. And I don't know how to use this BlackBerry") to talk about the band's hypnotic thirteenth album The Terror, the allure of punk rock, and why doing whatever you want sometimes leads to success.

I spent all night listening to The Terror. It's haunting, electric, psychedelic and feels different from anything you've done before. Where did all this grit come from?
I don't think it's a permanent switch. We've made so many records. We've been lucky doing our thing. One record leads to another, and freedom and curiosity. What our desire was was to mostly make music we felt we wanted to make. We didn't consider making a record when we were messing around with sound and synthesizers. All ideas start in a free area. It doesn't matter what you do.

You've put out thirteen albums now, but 2002's Yoshimi Battles the Pink Robots remains one of your most commercially successful works. Why do you think it resonates with so many fans?
I absolutely do not know. Popularity is mysterious. I don't know why we made it so polished and commercial sounding. If you heard this and not our other music you would think we were so organized. There's something about the story, and just the way the songs work on people. In the first month it was popular. One strategy is that it is used for weddings and funerals, for people who don't want to play standard songs.

It's been a long road, but it sounds like Yoshimi is finally going to hit Broadway.

It's been in the making since 2003. It's not really my creation, but it really hits on a personal level. When we play it we present it like a concert. I think people will really love it, but musical theatre isn't for everyone.

You're getting ready to take the stage at GoogaMooga. Anything you can reveal about that performance?
At some of these shows, a lot of people are there because it's a party, and they're drinking with their friends. I think it's about the music at GoogaMooga, and being in that moment. Sometimes I don't really think we're doing a show. We're setting up our stuff, we're doing new things. Obviously things happen, but I don't know if anything's going to happen. I'll stand there and sing emotional songs to people who are a little drunk.

Punk rock has been a big influence on you. Have you seen the "PUNK: Chaos to Couture" exhibition at the Metropolitan Museum of Art while you've been in town?
I haven't, but if I do get a chance I'd like to go, completely. I love the British stuff for sure, and the Minutemen. It made us think that we could do this. Now, punk rock has become such a cliche, but then, punk rock meant we were weirdos who could do whatever the fuck we wanted. Or we took it that way.

You spent many years working at Long John Silver's in Oklahoma, up until you secured your Warner Bros. deal. What was that fast food era like?
I worked there from 1977 through 1990. The way that we lived then was how most of the people we knew did. They did their music with virtually no hope of living off of it. We had our jobs and our art, and we thought that's how life would be. When we signed, all that we lived and thought about ourselves changed. We could really make records. We would be recording artists.