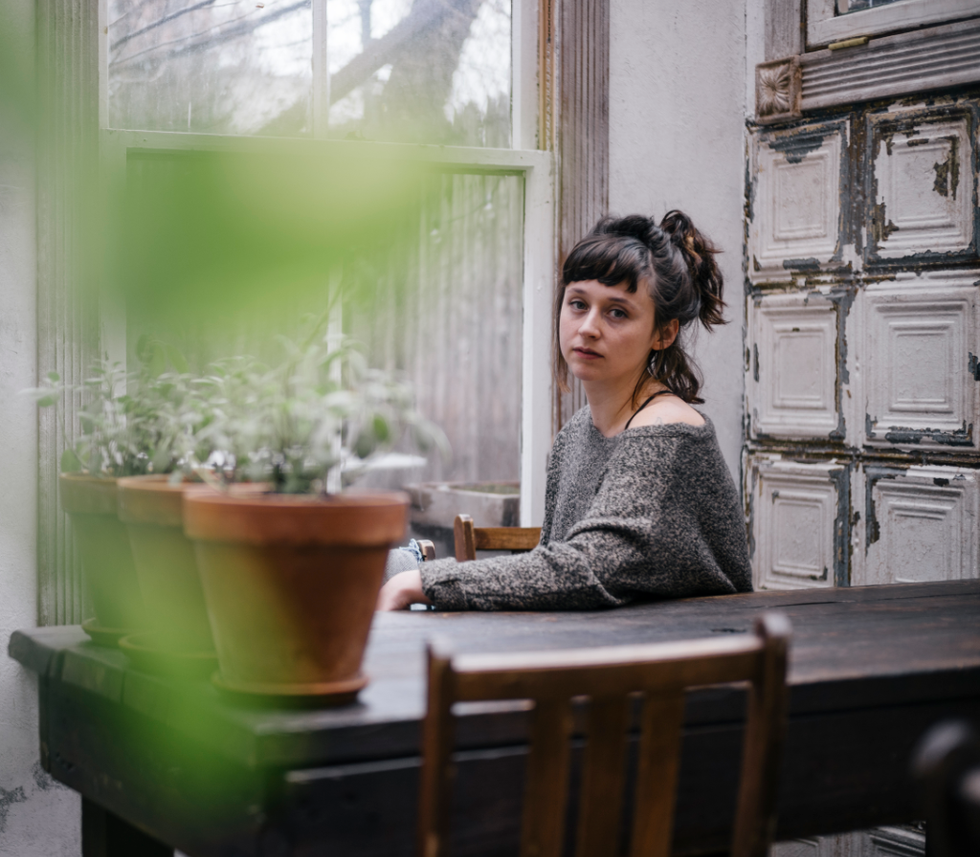 Waxahatchee's Katie Crutchfield On Her New Album, her Walking Dead Placement and Her 75% Pronounceable Band Name

Waxahatchee's Cerulean Salt was the kind of album that snuck up on you. What seemed at first like a collection of punchy indie-pop and unguarded acoustic ballads eventually wormed its way into your life until it became an old friend, always there with a wise word or a dollop of empathy to remind you that we're all just trying to figure it out.
So expectations were not small for the follow-up, but Katie Crutchfield, the songwriter behind the project, was determined to not let the pressure get to her. Born and raised in Alabama and now living in Philadelphia after a spell in Brooklyn, Crutchfield and her producer/bandmate Keith Spencer decamped to Long Island to make Ivy Tripp. Bigger, bolder and at times spookier than its predecessor, the new album sees Crutchfield moving to a new label, indie powerhouse Merge, and crushing the idea of Waxahatchee as merely a vessel for folk pop. (Suffice to say, the current live version of Waxahatchee has three guitarists, including Crutchfield's sister and former bandmate Allison, who also plays with indie punks Swearin'.) I called Katie at home in Philadelphia a few days before the release date to talk about the new album. Obviously, The Walking Dead also came up.

So your album comes out very soon. How are you feeling?

I feel good. The stream is up, the secret's out. I've been finished with it since the summer, so I'm ready for the world to have it.

Is it weird knowing that people were waiting for something from you for once, and knowing there were expectations out there?

It's an adjustment. It's a little strange, but I think I did a pretty good job with not letting that overtake me. Everything for me happens pretty slow. I feel like a lot of the time today, they make a record and then immediately they just shoot off into the galaxy. For me, I just feel like everything is really gradual. So I feel like I had a lot of time to sort of adjust and not to... this happened at a time when I feel relatively comfortable and confident in my work. I guess I'm not too worried about people's reactions, because I feel like I've made a record that I can stand beside and feel good about.

Your last album [2013's Cerulean Salt] was released on a small label. It felt like a very intimate, revealing album. And it really seemed to catch on over time. After having had that success, did it inspire you to keep being more honest? Or did you get a little intimidated by how many people knew who you were and really connected with what you were saying?
That's kind of like the key to all of it: I feel like I can't let the changes affect the way that I write. What I have really tried to with this record is figure out how to not think about all that stuff -- how to make the record that I was going to make, even if nobody was listening. Of course, I'm affected by it. But I'm just trying my best to... that's kind of why went off to Long Island and made the record and just sort of took a bunch of time off from touring and playing shows, and I reworked my whole band. Also, when I made the record, I didn't have a label, and that was a conscious choice, too. Just to be a person making music, with no one checking in there, or asking me what I was doing.

Do you have a day job at the moment, or at the time?

No, I've been fully employed by Waxahatchee for a little while now, which is pretty cool.

When did you get the sense that this is something you can make a career out of, for lack of better term?

I felt something was right when Cerulean Salt came out. I quit my job then, so that must have been two years ago now. Almost exactly two years ago, I quit my day job where I was a nanny. There was no way I could've kept a job because of how much stuff I had planned. And then, after all that touring, things sort of picked up unexpectedly.

I know you've been making music for a long time, both with this and with other projects, but when did you get the sense that you can spend your life being a professional songwriter and that would be just what you do?

I don't really know. I don't think I consider myself a professional musician until this year. It's just something I always did. I started writing songs when I was about 15. I fell in love with it immediately. As soon as I started doing that, it felt like what I wanted to do all the time. It was a social thing at first: just hanging out and playing shows with all my friends. But I was always really proactive. I think to the outside world -- to my parents, to my teachers -- I appeared to be such a fuck-up. I was drinking and smoking pot and just sleeping through school and flunking out. But all the while, I was writing records and booking tours and playing shows and printing merch and making sure that my band was doing all of this stuff all the time.

Do your parents now kind of trust that you made the right decision?

Oh, totally. It's a scary thing for your kid to be like, "Yeah, I just want to play music all the time." A lot of parents are like, "Do you think you're going to make money doing this?" And we were like, "Fuck that, we don't care about making money. We just want to make records." And that was a little scary for them, too, probably. So it's nice -- I think it's nice for them to see us be able to keep our heads above water and do what we really want to do. I mean, I think that's all that anyone's parents want for their kids -- to be happy and to stay afloat doing something that they love.

When people write about an album, they obviously bring their own stuff into it. But I remember a lot of reviews for your last one talked about how this seems like a person writing about living in a smaller college town, and how you can be in your own little world, and it can feel like it's closing in on you. This album seems a lot broader in terms of the viewpoint. What were you thinking about when you were focusing on the lyrics?

I wrote a lot of Cerulean Salt... I mean, I already was in Brooklyn, but I was writing it about a time where I was just in smaller cities. I lived in Tuscaloosa, Alabama for a while, which is a college town, when I went to Birmingham. A lot of that record is about that experience and that time of my life, even though I had already moved away. And this record... yeah. I try to keep things vague enough where I don't really blow up anybody's spot, but a lot of things are about actual experiences that I've had with actual people. With Ivy Tripp, it's more about observation -- things that I observed on a grander scale, and things that I've seen, and things that I've just observed about certain people's behaviors. That was a challenge for me, and that was something I had wanted to try and see how it turned out.

So your sister has been joining you on tour. How is it playing with her again, after both of you doing your own thing for a while?

It's cool. I mean, it's a different dynamic. We've only ever been in bands before that were very democratic. Everybody kind of gets to have their say. So I have to delegate everything and it's interesting. It's like a new dynamic for that, but so far, it's working out great.

Everyone gets a say, but you get the final say?

Exactly. Which is kind of nice for me.

People will often knock indie rock, or whatever you want to call it, as a boys club. In these past few months, your album's out, there's a new album Speedy Ortiz, there's Courtney Barnett, there's Joanna Gruesome. A lot of great, strong, female artists making music. Do you think indie rock is seeing a bit more gender parity?

Honestly, I feel pretty fortunate to be making music right now. I've experienced a lot of bullshit in my life when it comes to misogyny in the music world. A lot. Every woman, every queer person, every trans person, every person of color has. Except for white, cisgendered men, everyone playing music functions in a world of bullshit. So I don't want to downplay that by saying I'm so lucky. It's been difficult for me and much more difficult for other people, I'm sure.  But, I think it's really fucking cool just to be making music in a time where I think the best music happening right now is being made by women. I'm sure everyone's still experiencing some bullshit, but it is sort of cool to feel like, oh yeah, women are kind of running things right now.

So what was it like seeing someone sing one of your songs in The Walking Dead?

That was weird. That song ("Be Good") is a song I wrote a long time ago and I think that, for me, those scratchy, lo-fi, aesthetics makes it sort of bearable, because it's so sweet and sugary for a song that I would play. So that layer of scratchiness kind of makes it listenable. And hearing it  the way that it was played made me feel sort of strange. But I think (Walking Dead actress Emily Kinney) has a pretty voice it was kind of cool. It was just a little strange for me.

Hearing it in that clean, straightforward way, did it still feel like your song?

Not really. I think that's kind of the nail on the head. Yeah, it just didn't feel like my song, really. Which is fine.

Did you actually watch the episode it was in or did you just hear what they did with it?

I didn't watch it. I don't have cable. When it was on, my mom or somebody sent me a video of that part, so I saw the part, but I didn't see the episode.

On average, when you talk to your fans or people who don't know you but you're just talking to, how many people pronounced your band's name correctly? Like, what percent?

Oh. That's higher than I would have guessed.  I had pronounced it wrong for quite a while before someone corrected me.

Oh, it's OK. Fifteen percent say it incorrectly, and then 10 percent sort of look at me and try to say it, but aren't sure if they're saying it correctly, and then I just tell them: You say it exactly how it looks.
Ivy Tripp is out now on Merge Records. Details here.