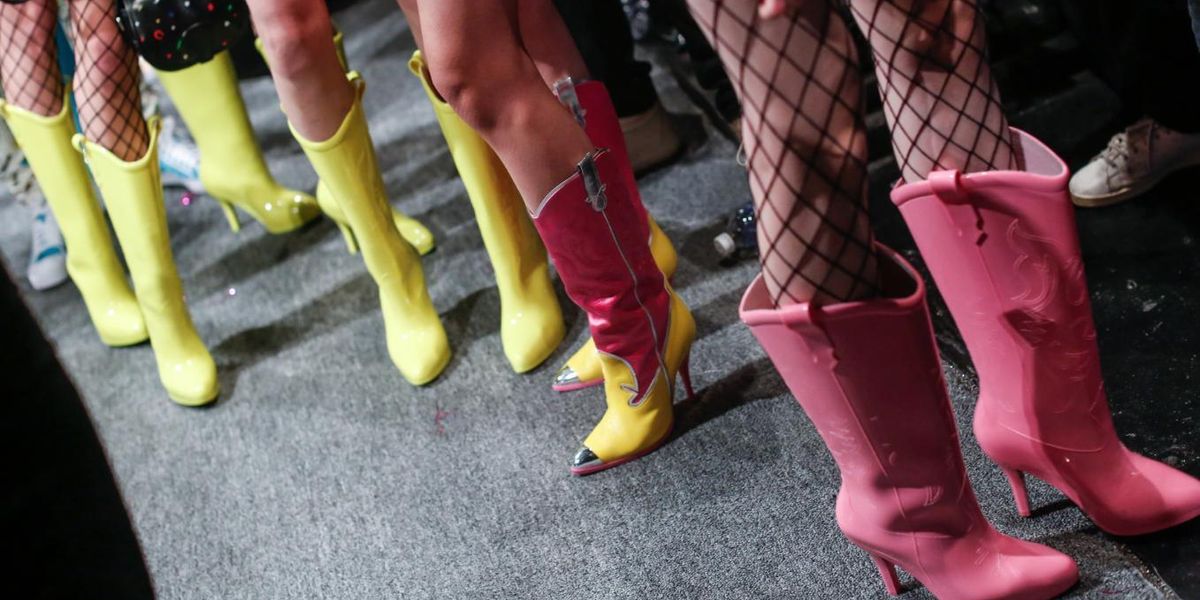 In Praise Of Watching Fashion Week From Afar

Are we having fun without everyone else?

Right about now, those of us interested in fashion who aren't a part of the "the industry" in some way are supposed to be suffering from crippling Fashion Week FOMO, scrolling hungrily through Twitter and Instagram runway posts, living vicariously through the fabulous lives of front row Chosen Ones™. But I'm not. Especially since I think it's us -- the relative normals, watching from the confines of our homes and phones -- who experience Fashion Week in the purest way you can.

Admittedly, to watch a fashion show from a distance sounds terrible. And that's because the point of Fashion Week is to be seen. It's about mingling, and watching, and commenting, and scouring (and to tweet subtly about who was wearing what near whom and honestly what's up with the kid in the front row). It's about entrenching yourself in the majesty of the fashion industry (the only industry still sleeping on a bed made of money), and about witnessing creative genius only a few steps away.

Except we know that's not what Fashion Week is like at all -- and this isn't a groundbreaking revelation. Friends and writers and photographers and models and anybody who's been within tweeting distance of the madness, and are willing to be honest about it, have painted vivid and eyeroll-inducing pictures of crowds, cameras, lateness, uncomfortable shoes, and the unquenchable thirst each show descends into. (Just search the #NYFW hashtag for everything from interesting commentary to whatever the opposite of that is.) And even the weeks are defined by branding: while Mercedes-Benz sponsors New York, Australia, Miami, Berlin, and Istanbul, MasterCard lends itself to Toronto, where I live, reminding everybody in attendance that without corporations, presenting the art of fashion would look a lot different.

So it's easy to get cynical. It's easy, when peeking behind the curtain and stripping away the pop culture-induced mythology, to see Fashion Week just as it is: part of a business. Part of an all-encompassing massive business, just like most big events are. It's easy for the magic to disappear and be replaced by the all-too familiar feelings of, "Oh . . ." that define adulthood and growing up -- like when we realized Santa Claus wasn't real or that Leonardo DiCaprio only dates models. Even now, I've never been to Fashion Week -- it was enough to hear about the struggle for seating and exodus-like crowds that I felt comfortable scrolling through social media instead of showing up to a show and running the risk of dropping to my knees and yelling "why!" like in Platoon. Besides, up until recently, I'd heard the stories of IRL Fashion Week exhaustion and nightmares, so I felt ready to give up the illusion that the business of fashion was fun. I love clothes, but "Fashion" seemed terrible.

But then Fashion Week put up a fight. With more of us aware of both designers and the models who support them, Fashion Week extended its perfectly manicured hand and invited us to look at the industry as it was meant to be seen: as a shiny, beautiful, and manipulated presentation, tailored to everything we used to believe about it.

Because it's easy to hate on the fashion industry. It's easy to dismiss trends or personal styles or luxe tastes because they've felt so out of reach for so long. Until the advent of street style in the 2000s (which has now been replaced with, "Honestly who cares just wear what you want"), fashion seemed reserved exclusively for the elite; for those who could afford or fit into pieces many of us would have to work a shit-ton of hours for. It seemed like we weren't wanted since we weren't invited. It seemed like the cool table at lunch that if you showed up and sat down at, you'd be met with "Are you lost?"

And the industry obviously clued in. As the 2010s progressed, more and more designers offered live streams and videos of their shows, and by doing so, gave viewers something those attending the actual events couldn't have: a fantasy -- free from the white noise of branding, crowds, and anything to distract from the clothes. A picture of what we thought fashion would be -- clothes in their purest form.

And that fantasy and picture are important. As teens, fashion fans projected our dreams and dream selves onto clothes that we felt would help make us powerful, and Fashion Week has since capitalized on that ethos by giving us easy access to the industry Kool-Aid. At home, watching the likes of Marc Jacobs and Alexander Wang and The Row, we don't see the chaos or controversy that dictate actual fashion shows and, despite knowing better, we engage in this made-to-fit form of make believe. By getting an edited, keyhole look into the Fashion Week experience, we can fill in the rest, mentally fitting the clothes into our own lives while entrenching ourselves in the shows' stories. We watch the movie, but aren't a part of it. It's Star Wars, without the behind-the-scenes featurette. We know it's not real, but we really don't need to know how much Oscar Isaac had to act alone in front of a green screen.

So while I do still sit, scrolling through Instagram and Twitter, basking in the splendor of pals' and professionals' Fashion Week experiences, the FOMO is gone. No, I'm not in the same room as Anna Wintour and Grace Coddington. No, I wasn't on the floor of Madison Square Garden during Yeezy Season 3. Nope, I'm not in the depths of Bushwick at a brand's warehouse after-party. But where the act of attending can get tedious or tiresome, I (and maybe you) get to curl up, watch our stories, and treat each show like it's a mini-movie made by the designer just for us -- free from crowds, overt branding, or fighting my inner introvert on days I'd rather go to a movie by myself. All while falling in love with fashion all over again.

Above: Backstage at Jeremy Scott. Photo by Kelly Taub/BFA.com