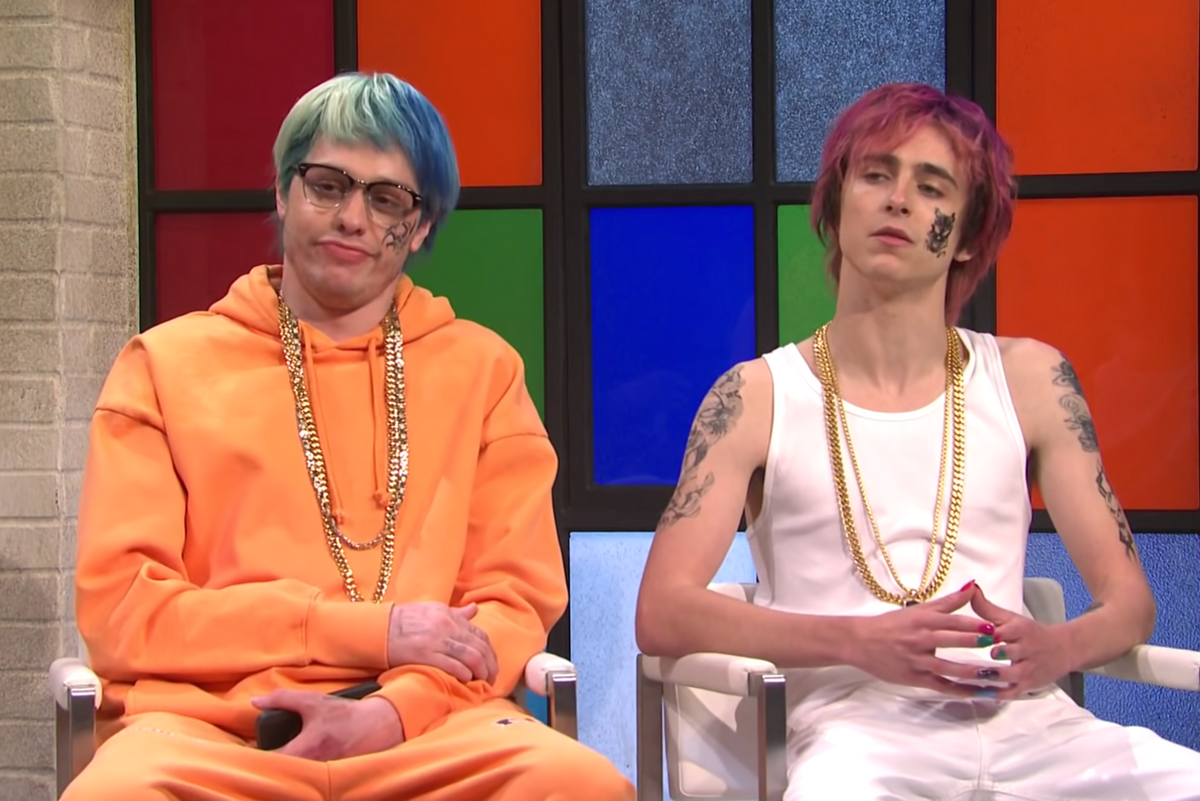 Saturday Night Live is not a pandemic-friendly show, in that it begins at midnight on a Saturday, hours after you already fell into a depressive sleep. Happily, the long-running sketch series always pops up on YouTube the next day, allowing you to pick and choose highlights and celebrity guests. This past weekend, as we all know by now, was Timothée Chalamet's first time hosting. And from the looks of things, he spent the past seven days becoming BFFs with one Pete Davidson.

First things first: the opening monologue. After skipping the cold open, notable 'fit king Chalamet obviously wore some low-key YSL as he introduced himself to the audience. Get your own for slightly under $4K. He was DELIGHTFULLY sweet and awkward as he riffed, and obviously took the opportunity to highlight that he's a native New Yorker, as you would when appearing on New York City's flagship TV show.

He even revealed some unexpected family connections to SNL legend Chris Farley. Like Harry Styles before him, Chalamet also took to the piano, where he was joined by Davidson for the first of many comedic collabs:

Next up, a digital short. Chalamet played the adorable son of Beck Bennett and Heidi Gardner in a luxury car commercial parody that...was actually pretty funny!

Another festive sketch about anthropomorphic COVID-19 viruses honestly hit way too close to home, but did feature the always-fun pairing of Chloe Fineman and Bowen Yang as STDs. As well as Chalamet as a bad boy virus swigging Purell. Just watch it, actually:

But we promised you some bromance! Let's continue. Davidson and Chalamet finally paired up again for a sports-themed sketch parodying terrifying Fox News competitor Newsmax. Worth it for the mustaches alone. Why... is so this hot to me?

The hairpiece shenanigans continued for a Gen-Z-friendly TikTok sketch that paired Davidson and Chalamet as clueless white TikTok rappers against some actual hip hop greats. The Fall Out Boy line was quite good...

Now, a little bit of actual weirdness that one assumes emerged from the Kyle Mooney side of the writers' room: a sketch about a tiny horse featuring singing and some heavy accent work????

And finally, as an inevitable treat, Chalamet wearing a festive little elf hat:

It was, for sure, an SNL episode hosted by Timothée Chalamet. There were also two performances by eternal Jersey icon Bruce Springsteen. And, during the closing cast hugs, some delicious movie biz pettiness: