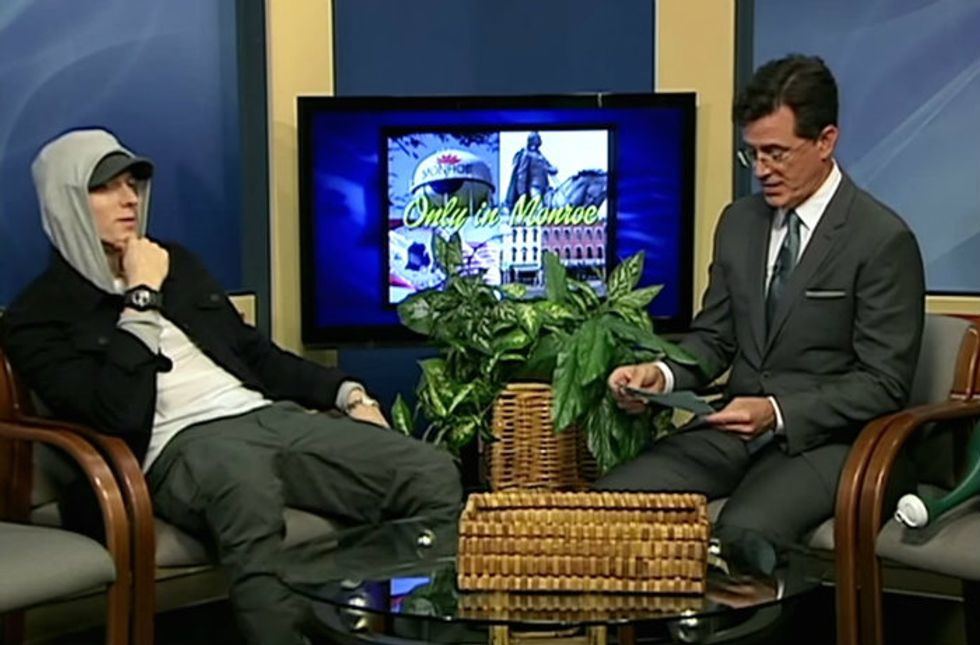 by Eric Thurm
PAPERMAG
As Stephen Colbert gears up for his new role as the replacement for David Letterman, he's done a lot to tweak his image. In addition to public appearances and the announcement of the bandleader, his Late Show team has started giving viewers a sense of what the show will entail -- and this might be the best hint yet.

Someone in Michigan found this video on Reddit, hosted by an official Late Show YouTube account. It depicts Stephen Colbert, in a slightly more earnest take on his well-known character (but with many of the same inflections and joke deliveries), hosting a very real public access show in Monroe, Michigan. Yes, it brings to mind Colbert's early "Better Know a District" segment, but it also has much of the same weirdo public access-riffing that's characterized a broad strain of comedy for the past few years. Also, he interview Eminem and gets him to sing several Bob Seger songs.

It's beautiful. Colbert creates his own continuity of references (did you know the river is cresting?), riffs on the purported ignorance and enthusiasm of most talk show hosts -- including an extended bit where he tries to give Eminem advice about how to prepare for retirement -- and sneaks in a great rap joke in which he claims that Will Smith is "street" rap in contrast with Bone Thugs-n-Harmony. If this is what Colbert's new show is going to be like, everyone should be beyond excited for the future of late-night.