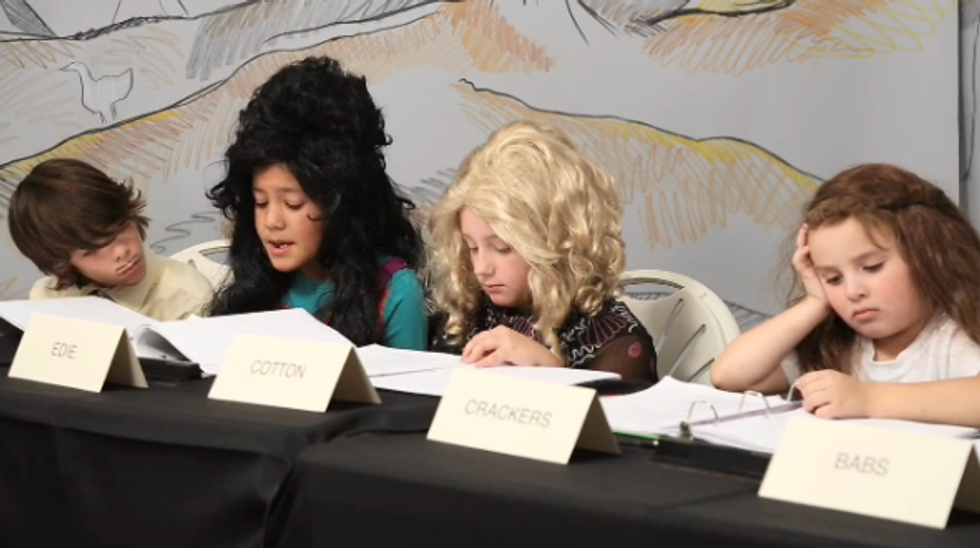 by Gabby Bess
PAPERMAG
For John Waters' newest exhibition at Marianne Boesky Gallery in Chelsea, Beverly Hills John, the director decided to turn his infamously obscene film, "Pink Flamingos" into a G-rated production starring cute kids. When we first got wind of this we had no idea what to expect, but now a clip of the "Kiddie Flamingos" is finally available and it's every bit as adorable and absurd as we hoped.

Over at the New York Times, where you can watch an exclusive clip of the 72-minute video installation, Waters explains why he decided to remake the film as a costumed table reading (we're talking full-on wigs, dress, and Divine eyebrows) with kids: "I've become my own worst enemy and rewrote the script so that it's G-rated... I see it as a new kind of perversity not to ever make an X-rated thing again."

Beverly Hills John also features a variety of other humorous "perversions," including photoshopped portrait of Justin Bieber with a facelift and an intellectual tabloid that boasts a "250-pound Joan Didion" as the cover girl.

Head over to NYT's site to watch a snippet of "Kiddie Flamingos" or wait to watch the full video on a loop at Marianne Boesky Gallery from Jan. 9 to Feb. 14.