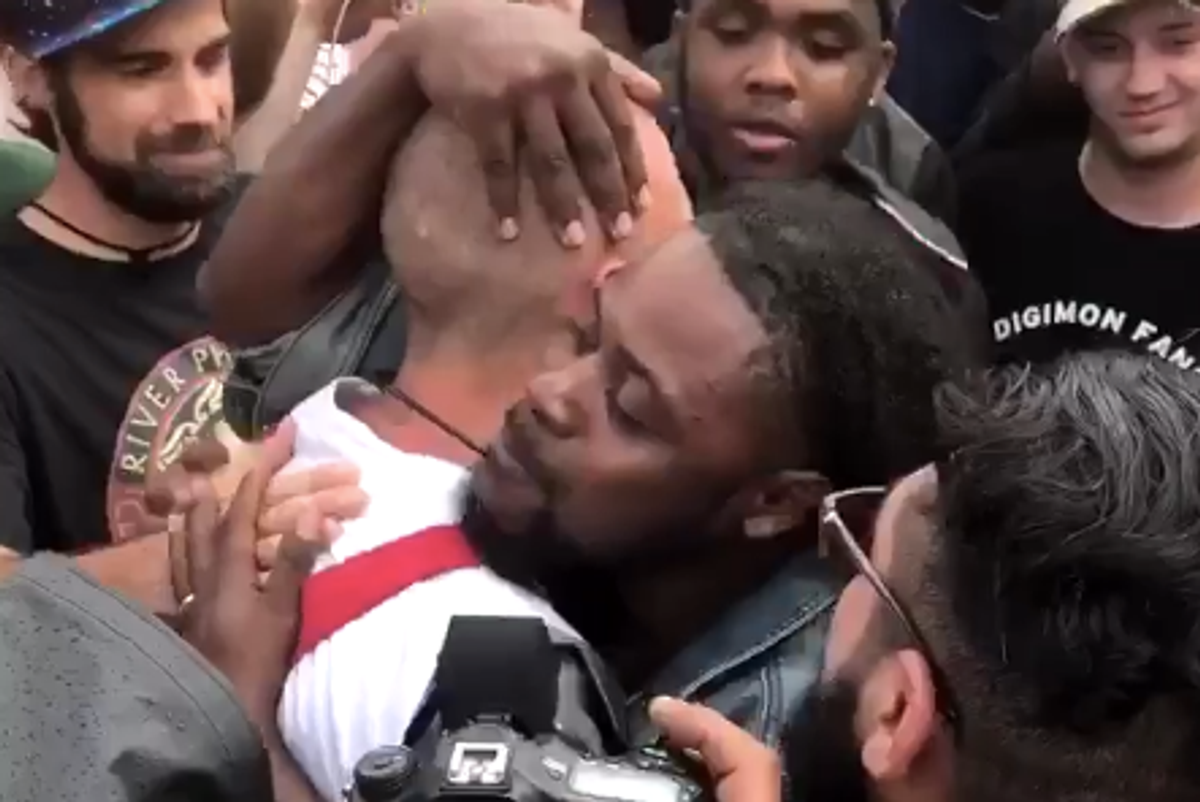 On Thursday afternoon, three months after the violent "Unite the Right" rally in Charlottesville, Virginia ended in chaos and the death of Heather Heyer, white supremacist leader Richard Spencer gave a speech at the University of Florida in Gainseville and was again met with widespread protests.

Though there was reportedly heavy police presence, anti-Spencer protestors clashed with his supporters, many of whom espouse neo-Nazi beliefs. In addition to scuffles between protestors and Spencer supporters, three men allegedly made Nazi salutes and fired into the crowd, though they missed their targets.

According to the The New York Daily News, one apparent neo-Nazi - a man named Randy Furniss, who wore a shirt emblazened with swastikas - was surrounded by protestors who were screaming and shoving at him. 31-year-old high school football coach Aaron Courtney, who is black, noticed Furniss and embraced him in a big hug, asking, "Why don't you like me, dog?"

"I could have hit him, I could have hurt him ... but something in me said, 'You know what? He just needs love," Courtney told the Daily News. "I had the opportunity to talk to someone who hates my guts and I wanted to know why. During our conversation, I asked him, 'Why do you hate me? What is it about me? Is it my skin color? My history? My dreadlocks?'"

He continued to ask questions, but Furniss refused to answer.

"After beating around the bush, and avoiding my questions, I asked him, I pleaded with him, I almost broke out in tears, growing increasingly angry because I didn't understand," Courtney said.

"Something in me said, 'You know what? He just needs love. Maybe he never met an African-American like this."

Courtney asked Furniss to give him a hug, and after initially resisting, he gave in. "I reached over and the third time, he wrapped his arms around me, and I heard God whisper in my ear, 'You changed his life," Courtney said.

He then asked Furniss again, "Why do you hate me?" According to Courtney, Furniss' responded, "I don't know."

Eventually Furniss was reportedly taken away by police, but not before taking a photo with Courtney's friend.

"I honestly feel that was a step in the right direction, for him to take a picture with a guy that he hated when he woke up this morning," he said.