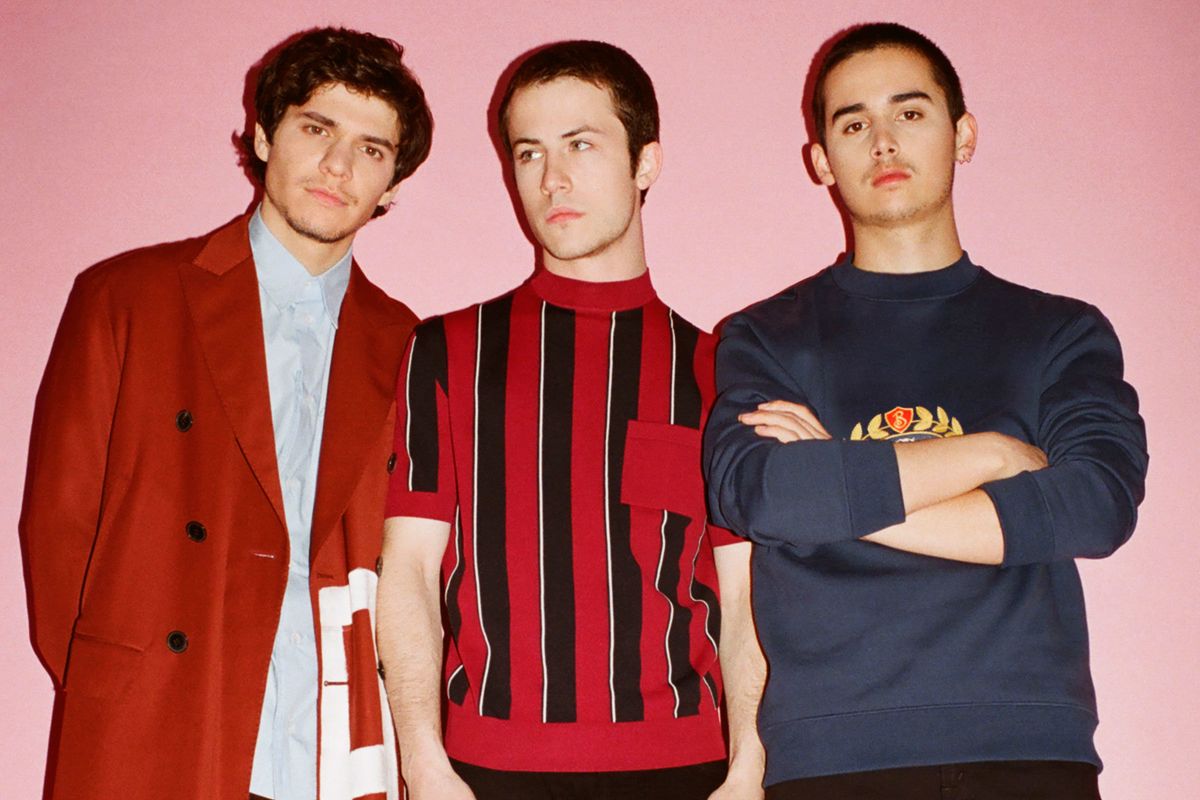 There was a time when indie-rock reigned. Teen shows gave birth to some of the most iconic soundtracks of all time, bursting with eclectic finds, and bands like Death Cab For Cutie and Paramore would frequent the charts. While today's musical landscape paints a different picture, Wallows is here to restore alt-rock to its former glory.

Comprised of co-frontman Dylan Minnette, who starred in the Selena Gomez-produced drama 13 Reasons Why (an association the band predictably can't seem to escape, much to their chagrin), fellow actor Braeden Lemasters and drummer Cole Preston, Wallows' West Coast-infused sound is the sonic equivalent of driving down the Pacific Coast highway in a drop top at sunset. Mutually melancholy and enthusiastic, Wallows has the versatility to satiate soppy souls and raise heart rates — all in all, a welcome anecdote to the times.

With the band's new EP, Spring, growing ever closer and a much-anticipated debut album on the horizon, PAPER sat down with Wallows to talk their meet-cute, the demanding mistress that is music and making magic.

It's unreal that you guys have already been playing together 10 years. How did that happen?

Dylan: Basically our moms met on this mom chatroom for young actors. Braeden and I were moving to LA, so our moms met up and then we met.

Cole: They had this bond for classic rock music like the Beatles, Zeppelin, all that, then Dylan did this music program in LA literally called "Join the Band," asked Braeden to come with him. And then they show up and I'm the drummer that was in their little band for the program.

You guys get compared to some pretty massive rock legends. How did your sound evolve from those LA cover days?

Braeden: Yeah, I guess. I would just play music in my room for hours upon hours every day when I was growing up. So I would just listen to records constantly. You know, Led Zeppelin, all of that, just try to write music based on that. Like I was just really young and then over time it just evolved into The Strokes and Kings of Leon and things like that.

The Strokes is something that pops up a lot.

Dylan: They do come up a lot. Especially like "Pleaser," "Pulling Leaves" and stuff. It's not like a conscious thing.

That's such a lovely comparison though. It could be worse.

Braeden: We hear that all the time, we're just like "Ugh." It is cool though, it's like one of my favorite bands ever.

Dylan: It's such a huge part of why we even started playing music. The Strokes or bands like are definitely within our blood. With "Pictures of Girls" that just came out, I expected the immediate comparisons to be The Strokes.

Braeden: I don't hear it at all.

Cole: I don't hear it at all either.

Dylan: Yeah, used as a reference. My dream is to have all of my favorite bands be our related artists on Spotify.

Is there pressure to be constantly churning out music?

Is that coming internally or from outside sources?


Braeden: It's definitely internally. I feel like its our own thing, which is cool.

Artists tend to get on this treadmill too. They get a degree of exposure and feel they have to keep the momentum going.


Braeden: I have to try my best when I get wrapped up in any reviews of our stuff or anything. It's best not to do that. It'd be so hard to see anything just because I don't want anything to get you know, just in your head.

Dylan: "Worst new music," or something. I've never been in a position to like read reviews of something that you created.

You guys dabble in other fields, do you ever read reviews of stuff that you've put out?

Dylan: Yeah, but it doesn't affect me if it's bad or good because I didn't make it.

Braeden: Yeah like this is our art this time coming out of our heads. And having someone judge that, that's just going to be super weird, but whatever. Maybe I'll go into a deep depression, I have no idea. We'd just go spiraling down.

Cole: But then again it's like, false hopes, if it's good maybe you're peaking.

Braeden: Also, fuck that whole mentality of what I just said. I don't know.

Lana Del Rey did that really well. She got a heap of criticism and kind of just doubled down, like, You know what, fuck it, I'm going to make an album that's darker than this and just show you guys.

Dylan: And I think that was Ultraviolence right? So crazy. There's a lot, I mean, I just love watching artists grow. Beyoncé's always been amazing, but it was always like, she'd have singles on an album that were big and then she'd have an album that I feel like people wouldn't talk about the album as much. You'd have like four, five, or six hits. And now, Beyoncé is an album artist. Like Lemonade.

Braeden: Yeah, albums mean a lot to us I think. Blonde by Frank Ocean. Frank has made two official albums and both are just, you know exactly what they are. That's the rarer case of coming out of the gate with like a debut that everyone unanimously loves, and then having to deal with major expectations. I want to make a Blonde one day. Like I want to make a 50 percent that's as good as Blonde.

There was a time when bands like Paramore and My Chemical Romance dominated radio, and now hip-hop is pop. What do you guys think about that shift? What's the future of indie-rock?

Dylan: I don't know, I think it's actually a very diverse time in music right now. Which is really cool. Like I feel like I and a lot of my peers and friends and everyone listens to so much music. Like I listen to Kill A Butterfly and, DAMN. and then I'll listen to a pop album. And it's like, there's no boundaries anymore. If it's good, it's good. It's like, I think, us just being an Indie band or whatever. I think we're going to definitely show influenced of other things and I would love to work with people like Tyler the Creator or like The Garden or random bands. I definitely think that there's no, you don't have to limit yourself anymore. You can do whatever you want.

Anything that's not Top 40.


Dylan: Yeah right, but then there's the people who own pop, or there's people that own rock or hip-hop and that's great. There's huge blends right now, which are really cool and I hope we can somehow fall into that category. But at the same time like Man of the Woods, where does Justin go from there? Is he going to make another smorgasbord, like buffet-style album or is he going to make like, you know what I mean?

Definitely, smorgasbord is a great way to describe it.

Right, palatable for the whole family. There's real emphasis at the moment on infusing social justice into music. Where do you guys stand on that?

Dylan: At least not yet. Lyrics come very, very, very last for me when I'm writing in the process, so we were in the studio and I wasn't finishing lyrics on, at least a song that I was singing, until the night before we were doing the vocals. I want to write songs that are important and definitely infuse some social justice in there because I think it's really, really fascinating or really cool when artists have something to stand for and they have a voice. And for the better, it's really cool. So I'd love to explore that one day. Once I can get the point across and not sound like an idiot.

How did 13 Reasons Why impact you as a band? It must be easy to get boxed in.

Braeden: I think that what's saving us is the fact that we just love music so much, were just do dedicated to what we want to do. Also, the fact that it's not actors gone band, it's like we've always been playing. So it's like the more that we can sort of get that idea across, I think the better. That's really important to the whole story because we're not lying you know, we've been in this band since we were like 12 years old.

Did you guys predict its success?

Braeden: I definitely spend most of my time thinking about music and listening to music and really, I can see myself in music more than anything acting.


Dylan: I never think about acting, unless I have to. There's definitely the magic lost at a certain point because when you've been doing it for so long, it's easy to feel like a job.

Totally. Well it is a job.

Dylan: It is. It literally is a job. It just is and so is music, but we are in charge and doing it ourselves, and that just feels like magic right now.