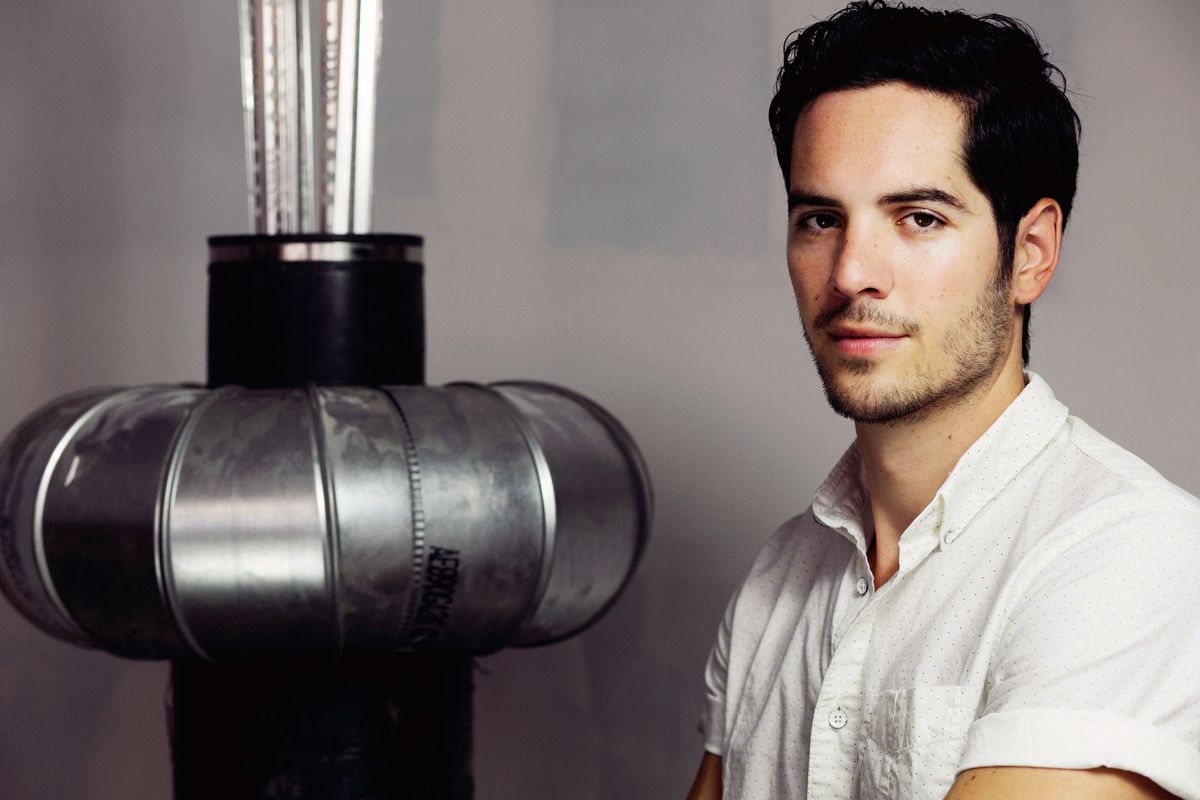 Wade Schaming’s Junk: Meet a Sculptor Who Organizes Chaos After a Chaotic Life

It's not uncommon for an artist to have an obsession. Monet had lilies. Damien Hirst fixates on death. Artist Sophie Calle created an entire exhibition, Take Care of Yourself, after receiving a break-up letter (the exhibition's title comes from said letter's sign off). For Brooklyn-based installation artist and sculptor Wade Schaming, 32, he is almost singularly driven by his relationship to his late mother. Wade's mother was diagnosed with a rare brain disease in 2008 that manifested itself through strange and erratic behaviors like shoplifting, crippling memory loss and dementia, and an aversion to cleanliness. He recently sat with PAPER to discuss the role she continues to play in his life and work as well as a new show of his pieces on display at a temporary art space in New Rochelle, NY on September 24 from 12-4pm (which you can peep an early, exclusive look in the gallery below).


You're originally from Pittsburgh. Tell me about what growing up there was like for you.

My life started very normal -- loving parents and a stay at home mom who was encouraging about art. We used to sit and draw Christmas trees no matter what time of year because they were my favorite. I took art classes at the same place as Andy Warhol.

But your home life didn't end up so typical.

Yeah, home was clean and put together when I was little and then, very slowly, it stopped being presentable. My mom started hoarding. First clutter in a bedroom, then the basement -- then a tipping point where it was no longer possible to have guests over, and with that her mood and her character started to shift. She would be agitated and then [when I was in college] it maxed out and reversed so that she was almost totally withdrawn. Her language became disrupted to the point of being an autistic toddler. She stopped making sense. It was called frontotemporal lobar degeneration. It took years for that diagnosis -- the neurologists and the psychologist fought over what was wrong from faking it to abuse to Alzheimer's.

How was that experience-- or, rather, relationship -- a catalyst for making you the sculptor you are today?

I was in grad school and told my class a little bit of my story, about my mom's hoarding, and a professor -- Marilyn Minter, who is known for photographing her drug-addicted mother -- talked to me about artists like Nan Goldin and Larry Clark and drove home that it was OK to expose the family secret through art. She told me to go home and photograph the junk. So I did.

What was the response to the pictures you took?

They weren't great. It was photos of literal junk. I didn't want to take pictures of my mother because there was so much shame, and I didn't want to exploit her. It took until after grad school when I got a studio in Bushwick and things at home had completely deteriorated that I started making installations similar to what I'm making today. I started to find that these exterior installations of junk gave me pleasure and purpose, and when I made them at home, my mother would be around. She'd interact with them, they calmed her, and I finally photographed her with them.

What changed so that you no longer felt like you were exploiting her?

It started to feel like I needed to do it. I needed to document her because every three months she would look different. She had this style of, like, muumuus with hoodies in the middle of July. My mother was beautiful once; she was a model. And what she became when she had full-blown dementia wasn't my mother. That's what I was photographing, the illness.

No, I never felt better.

So do you keep creating in hopes that you'll get past this and eventually your mother won't be part of your art?

No, no -- it is a part of me. I don't want to get rid of it. But I don't mention her in my artist statement anymore.

What's here, in this space?

Four sculptures of [found] material in this room. It's a continuation of what I've been doing: finding, collecting, stacking, putting things together that don't fit in their natural sense. 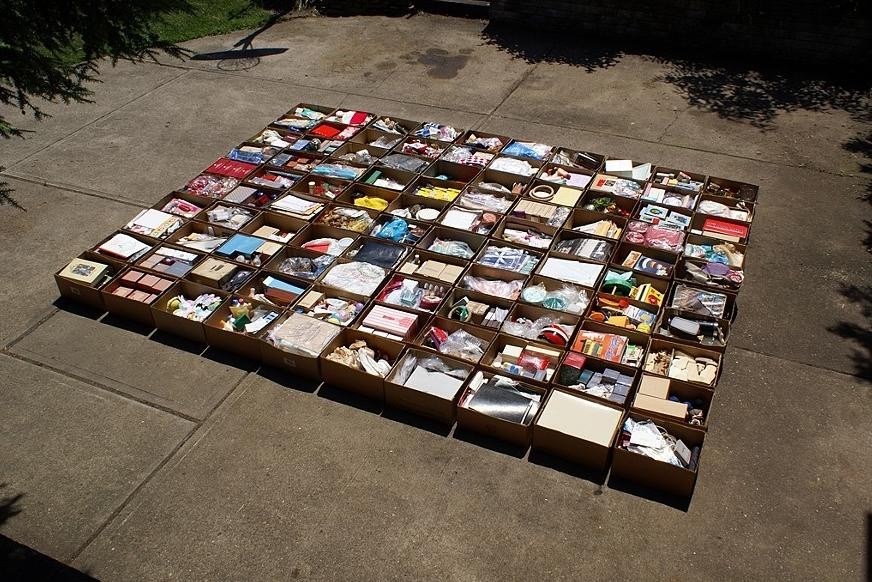 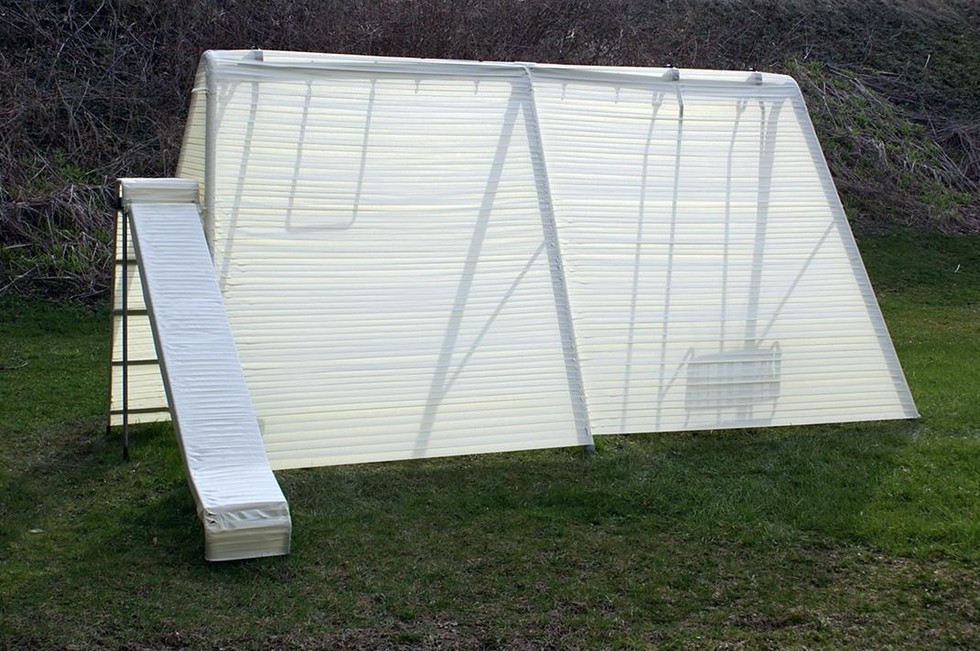 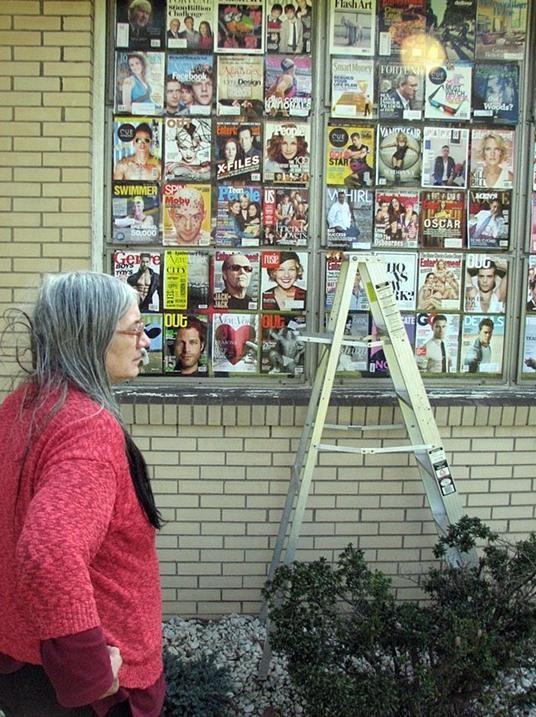 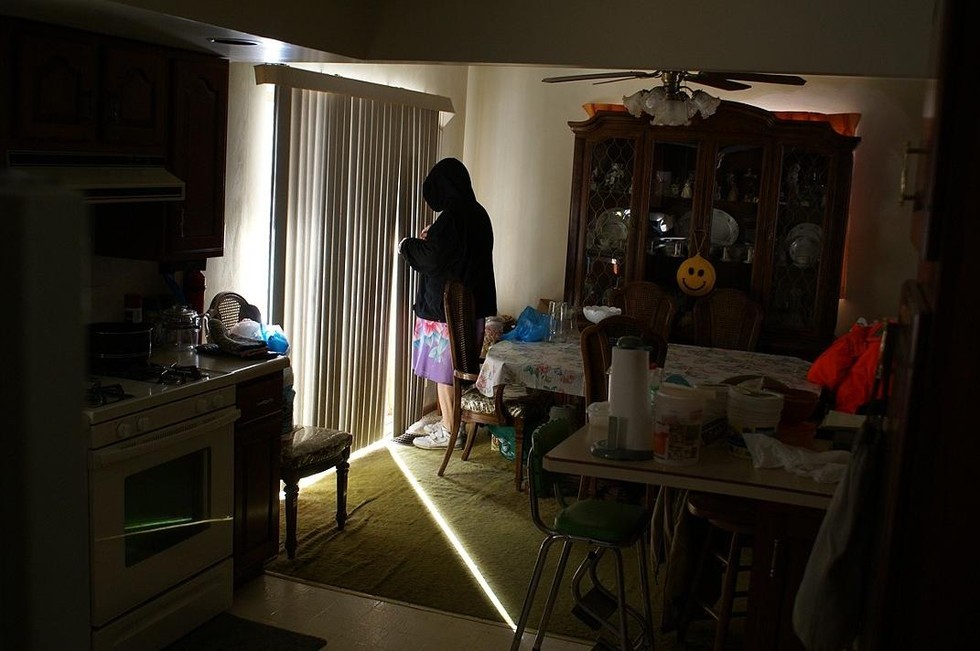 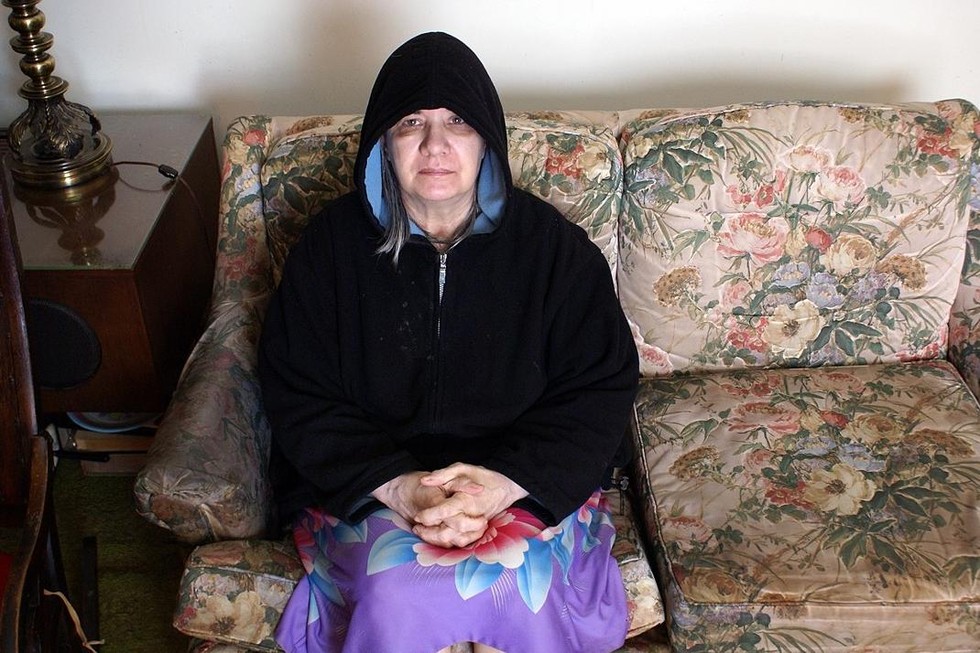 Why is this your thing?

I'm obsessed with making. It gives me pleasure and purpose. But also I'm good at assemblage -- at creating things that exist in an unrealistic world. I make rules for myself: don't break anything, don't clean it. But then I cheat if maybe I need it to look better for the photograph.

Even your relationship to rules and how you break them relates back to your mother -- it's like you're embracing mental illness or at least the compulsions within you and then rejecting them.

How do people react to these sculptures?

I get some pretty emotional reactions, but mostly when it's presented within the context of my mother. See, I say I've moved on but I haven't.

How's it feel to give life to something that's discarded?

It feels great. When I put things together and it looks like they were meant to be that way -- that gives me such pleasure. And I think it comes from living in a house that was full of junk.

Do you have any emotional attachments to any of these objects?

Yes, especially when the objects are together. It's hard to take them apart and get rid of them. Even when I'm cleaning my apartment I find myself negotiating when throwing out old clothes.

Do you ever feel like you are too focused on her?


Do I think of her? Yes. Is it as often as after she died? No. When I'm working, I think about the state of my life now -- it's tapping into a general sadness or panic. Everyone has all kinds of demons. Am I making monuments to my mother? No. This isn't that.

Then what is it?

It's something that I do. I have to create. This is what happens.

Do you ever think about what if your mother never got sick?

I knew you were going to ask that. I wonder. I'd still be an artist. What would I make? I don't know. Maybe I'd be a painter. I drew maps in high school of new worlds. Maybe I'd do that.

Schaming's new work that will be on display at a temporary art space at 5 Anderson Street in New Rochelle, NY on September 24 from 12 - 4pm.

The exhibit is presented by Residency Unlimited in collaboration with the New Rochelle Business Improvement District. (The space is just a 30 minute train ride from NYC.)