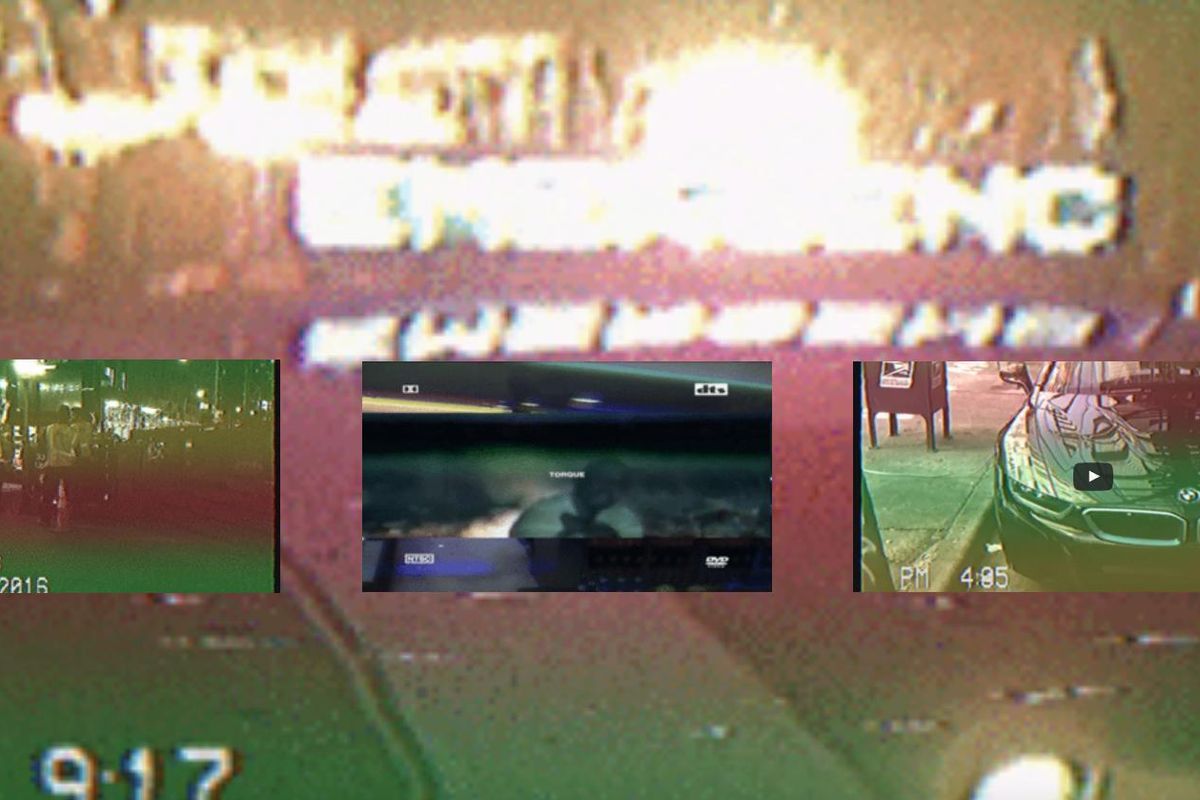 Our friends at NewHive are currently in the midst of a two-week-long series of commissioned artworks exploring privacy, surveillance and prison reform, and in conjunction, we'll be running a series of accompanying interviews, features and essays by the featured artists. The second installment of this series comes in the form of an interview with musician vyle and artist Devin Kenny about their four-part online installation, CAMERAROLL.


The Call by vyle and Devin Kenny

CAMERAROLL is a four-page digital installation built on the NewHive platform, consisting of original music production, found footage, and original video content that create moving snapshots highlighting the injustices caused by societal and systemic inequities. Composed of a soundtrack made from of sourced industrial "instruments" produced by vyle and accompanied by text and media curated by Devin Kenny, CAMERAROLL also features two new original songs from vyle, "THEY WON'T PUT THE SCANNERS DOWN(Torque)" and "Out Of Name", a spoken word piece. Both songs are exclusive to CAMERAROLL.

"For thousands of years, different groups of people have exercised an innumerable quantity of behaviors that can affect others uniquely. Black people of older generations have always told stories filled with the misfortune of being stopped by sheriff's deputies on a dark country road, European migrants with stories of discrimination from the US population, and Muslim airline passengers unable to fly because of how their name "reads", amongst other injustices," say the artists. "One thing that has changed in recent years is the affordability of portable computing, giving the masses the ability to document all of the current societal norms. They display an authentic view of the human experience that was virtually impossible in years before. Within this view every aspect becomes visible, our beauty and our blemishes. In the beginning, closed circuit cameras were touted as a way to keep people safe if no "human" eyes were in the area. Nowadays, the cameras in our devices act as both witness and bystander…"


We spoke with vyle and Devin Kenny about Chicago, surveillance and Hip Hop as resistance.

vyle: My name is vyle, a Vocalist, Songwriter, Producer and Artist from Hyde Park, a neighborhood in the Southside of Chicago, Illinois.

Devin Kenny: I'm Devin Kenny. I work as a contemporary artist working across and between a variety of mediums.

How do you two know each other?

v: I've known Devin since I was a teenager, seeing him in the neighborhood and knowing we were into the same things, namely not gang-banging lol. When I moved to NYC, I would see Devin around and we would keep up with what one another was doing, always speaking of working together at some point. Devin is a prolific interdisciplinary artist that comes from the exact setting that I come from, so when I was approached by NewHive about this project, he was someone I instantly thought of.

DK : I first became aware of vyle through a record store in Hyde Park, Chicago (where I grew up) called Dr. Wax. I was really enthralled by the production, the style of rapping, and everything else, it was really unique, and sounded like nothing else I had heard of coming from Chicago underground hiphop at the time. The Oh I Think Dey Like Hoodtronics mixtape were also really inspiring, as it was bridging electronic music and hiphop in a way I had never heard before, very ahead of the times. Prescient.

How did the project come together process-wise, who did what?

DK: We worked pretty organically, going back and forth across computer networks. Given a set of themes I would produce a kind of stream of consciousness list of images and relevant historical and or/media events, and then find the assets or their corollaries online, or we would produce them on the fly with digital video cameras, image editing software, et cetera.

v: What Devin said, basically. After we got all of the assets together, I scored each page.

Out of Name by vyle and Devin Kenny

Where did the images + sounds come from?

v: Some of the images were sourced, a lot of the gifs come from footage I shot with my iPad. On the page with "THEY WON'T PUT THE SCANNERS DOWN (Torque), some of the visuals were from the original video I shot with Jayne Doe.

DK: A lot of the images are informed by prior knowledge of the prison-industrial complex and labor history : the Attica Prison Rebellion, Jeremy Bentham's Panopticon, everyday realities of bail bondsmen and other sources.

Whats the importance of the title "CAMERAROLL"?

v: One correlation between most of the video assets compiled by news outlets is the fact that the footage itself is housed in a device -- [in a] Camera Roll.

With both of you being from Chicago, could you say that surveillance has played a part in preventing crime in prisons or impoverished areas there?

DK: I can't really speak to the 'effectiveness' of crime prevention, but I will say that in the neighborhood I lived in, Hyde Park/Kenwood, there was the unique character of having 2 police forces patrolling : that of the Chicago Police Department, as well as the University of Chicago. During my teenage years, new 'anti-loitering' laws were implemented that essentially treated any group of 3 or more people found congregating out of doors as a gang of criminals. This law was focused on the Black and Brown communities of Chicago. As a young person in counterculture : skateboarding, and graffiti/hiphop this should have had an impact on our behavior. It didn't.

v: I don't think cameras on a "violent" block is gonna stop the shooting on that block. When you have kids with no access to money or jobs, you create a wave of people that will do whatever it takes, even that is joining a lifestyle where one doesn't think they will live to see 25.

vyle, on the second page you have a song called "They Won't Put The Scanners Down" as the backdrop. What are "Scanners" and who isn't putting them "down"?

v: Scanners refers to a few things, it could be fingerprint scanners, could be the biometric iris scanning that correctional facilities use; it could also be weapons that police use, wether its a stun gun or their actual gun. When I first wrote the song, it was right after the death of Michael Brown; I kept the song under wraps because I didn't want to seem like I'm speaking to something just because it's a part of current events, but as we can all tell, these type of videos aren't going anywhere and humans in general need to make these issues part of our collective conversation.

Devin, are there any correlations between "CAMERAROLL" and your past work?

DK: Hip hop as an art and set of strategies of resistance has been a part of my work since the beginning ,so while formally I have never done a collaborative project in this way, many of the methods found their origins in previous work. In 2013 I made an album released on NewHive called Alone We Play which was dealing with intersections of "inner-city" culture and network culture.

Any other projects that you guys are working on?

v: I'm finishing up an experiential rap album, entitled "A Ü T O/M Ö T O R" at the moment. Other than that, producing for a few good artists that I cant talk about right now, check my Twitter or Instagram for up to the date news lol.

DK: I have been working with a musician named Drag Lomax and there's new stuff on the way from him, I'm also working on web projects, and a performance for an exhibition in Dusseldorf called "Missed Connections" curated by Jennifer Chan, on the occasion of Hito Steyerl's Factory of The Sun opening.

vyle has produced for an array of artists since the start of 2016, including Azealia Banks, Boyslashfriend, Cakes Da Killa, and Rick Ross, amongst others. He has been featured in DIS Magazine, Bullett Magazine, and Complex and worked with PC MUSIC, Gypsy Sport, Samsung, Dell, Alienware, and Sennheiser on events and performances. vyle's production has been included in art installations at the Whitney Museum of American Art, Hammer Museum, Superchief Gallery SOHO, City Bird Gallery (NYC), and The Bitcoin Center. He also maintains DJ residencies at Manhattan's Up & Down and Thotlandia. vyle is currently finishing up his 2nd official album entitled "A Ü T O/M Ö T O R", which will include an art exhibition presenting interactive 3D environments

Devin Kenny is an interdisciplinary artist, writer, musician, and independent curator. Hailing from the south side of Chicago, he relocated to New York to begin his studies at Cooper Union. He has since continued his practice through the Bruce High Quality Foundation University, Skowhegan School of Painting and Sculpture, SOMA Mexico, and collaborations with DADDY, pooool, Studio Workout, Temporary Agency and various art and music venues in New York City, Chicago, Los Angeles, and elsewhere including: Recess, Het Roode Bioscoop, REDCAT, MoMa PS1, Freak City, and Santos Party House. He received his MFA in 2013 from the New Genres department at UCLA and is an alum of the Whitney Independent Study Program.