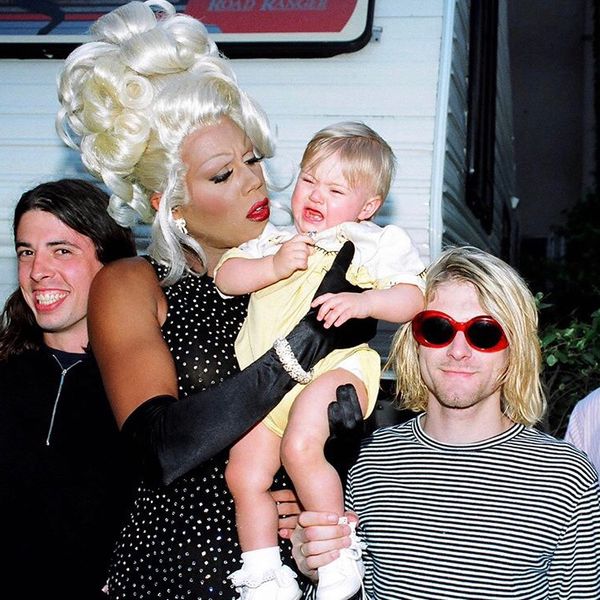 The Story Behind the Most Epic VMAs Photo Ever

There are a few defining images of the MTV Video Music Awards, quintessential pictures from the show that come up year after year. Rose McGowan walking the red carpet with Marilyn Manson, exposed in a defiant naked dress; Britney Spears with a python wrapped around her neck; Kanye West shrugging after interrupting Taylor Swift's acceptance speech.

But there's a certain set of images for which we have a true soft spot: a series from the 1993 VMAs featuring RuPaul, Kurt Cobain, Dave Grohl, and Krist Novoselic of Nirvana, and Courtney Love joyfully mugging for the camera, with baby Francis Bean Cobain crying in Ru's arms. Sorry to overuse "iconic," but what are these if not iconic in the extreme? Note Grohl's mile-wide grin.

In an interview with the AV Club, RuPaul broke down the story behind the photos. "I literally met [Nirvana] on the step-and-repeat red carpet at the MTV Awards, and Kurt Cobain told me, 'You know, we went to see you perform in Seattle, but you had already performed and left by the time we got there.' Because it was one of those gigs where I think I may have gone on at like 10 or something like that, and that tickled me," he recounted.

All of the members of Nirvana were huge fans of RuPaul, and understood his art. "These are kids who come from the same irreverent, hippie, bohemian mentality that I came from," he continued. "So of course they're going to gravitate toward what I'm doing. And a lot of people don't get that. A lot of people don't have that computer program to understand what that is, that irreverence, that wink that drag is. A lot of people are offended by it and that's the end of it."

"So Kurt Cobain and Courtney Love and the other kids in that band loved it, and you could see it in their faces when they're taking the pictures. They're not going boo, or it's not like a joke. It's like, 'This is fucking cool.'"

RuPaul was an important influence on the rockstars. Cobain frequently played with gender presentation, and Love was always inspired by drag, telling Gay Times that her "freshman year of learning how to be a rock star was just hanging around drag queens." They knew the pictures would be "fucking cool." In addition to their music, Cobain, Love, and RuPaul are all known for their style, for the ability to create indelible moments. They clearly made one happen here.

Nirvana and RuPaul kept up an important, if brief, relationship. The band even went on to appear on Ru's Christmas special that year, performing "We Wish You a Merry Christmas." It aired just a few months before Cobain died on April 5th, 1994.

This season, Love appeared as a guest judge on RuPaul's Drag Race. "I think that drag and punk come from the same place — a place of living your truth and breaking the rules," she told Yahoo. "Drag queens aren't afraid to push boundaries every day, and you have to push boundaries in punk too."

Her episode aired on the 26th anniversary of Cobain's death.

RuPaul also reunited with Frances Bean this year. She shared an Instagram in May of their reunion, which she's since deleted. But she still proudly displays her crying photo. It's the ideal "first headshot."