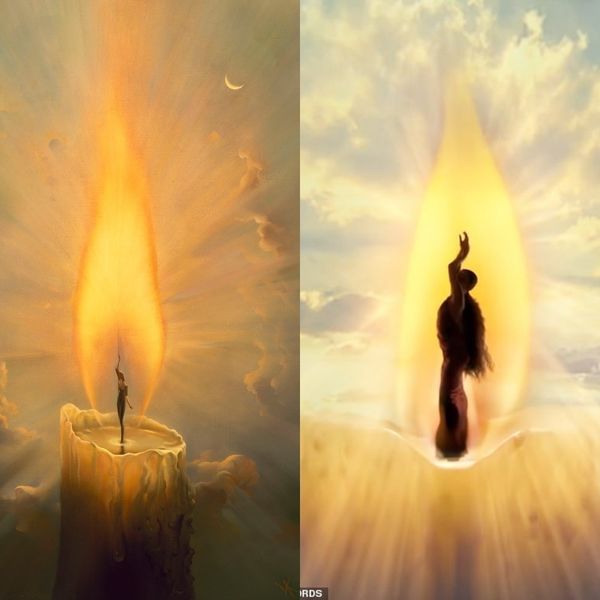 Ariana Grande is officially free of a lawsuit filed against her earlier this year by surrealist painter Vladimir Kush, which alleged that the pop star ripped off his imagery in her "God is a Woman" music video, reports Pitchfork.

In his lawsuit, filed in January, Kush claimed that the scenes in "God is a Woman" where Ari appears dancing inside the flame of a supersized candle, plagiarized his paintings "The Candle" and "The Candle Two," from 1999 and 2000 respectively. The suit asked for damages, and for Grande's team to take down the video.

Vladimir Kush on Instagram: “Saturday Inspiration: "Candle"- this beautiful piece is almost sold out! In this piece a woman holds the torch of the spiritual light,…”

Kush is a kitschy, multi-media artist who makes surrealist, steam-punk-naturalist paintings and sculptures like these:

Vladimir Kush on Instagram: “Gift for the Bride UPDATE Not finished yet. Will be unveiled on Dec. 19th at our Laguna Beach gallery. Join us for the celebration!”

Vladimir Kush on Instagram: “Play for the Ocean The Sky and the still Ocean respond to the charming sounds of the violin concerto. This unification with nature is…”

Vladimir Kush on Instagram: “#MilleniumWatchmen - The beating of the human heart is forever connected to the ticking of the celestial clock. #kushfineart #vladimirkush…”

"This depiction of Ms. Grande is strikingly similar to Plaintiffs' copyrighted Works," argued the lawsuit, filed by Las Vegas entertainment attorney Mark Tratos, according to Artnet. "[The] defendants chose to use the same color palette, the same background of a cloudy sky, the same ring effect of the clouds around the flame, the same light beams radiating from the flame, and the same color candle, light fading to dark."

The suit also named the video's director Dave Meyers and California company, Freenjoy Inc., alleging the director and company have a history with plagiarism, given they were sued by another artist Lina Iris Victor in 2018 over imagery in Kendrick Lamar and SZA's "All Of The Stars" video. That suit was also eventually settled.

Kush, according to Artnet, discovered the resemblance in a PopSugar listicle breaking down all the visual references in Ari's video, which include the Greek myth of Romulus and Remus, the Illuminati and Michelangelo's "The Creation of Adam" painted on the Sistine Chapel.

The parties have reached resolution in a Nevada federal court, according to Pitchfork, which confirmed reports by The Blast.

A lady in a candle is likely an image that has graced the sketchbook of many a high school art student, so it makes sense that Ari's getting off easy (others have not been so lucky). Kush should probably follow Taylor Swift closely though, it's easy to picture something like these landing in one of her upcoming Lover videos.

Vladimir Kush on Instagram: “Claws of Fate Along the crossing diagonal lines or flight trajectories clearly visible in the painting, huge birds of prey will dive…”

Vladimir Kush on Instagram: “"Land of Cervantes" Rather than fighting giants, here Don Quixote attempts to catch the beauty of these beautiful butterflies therefore…”