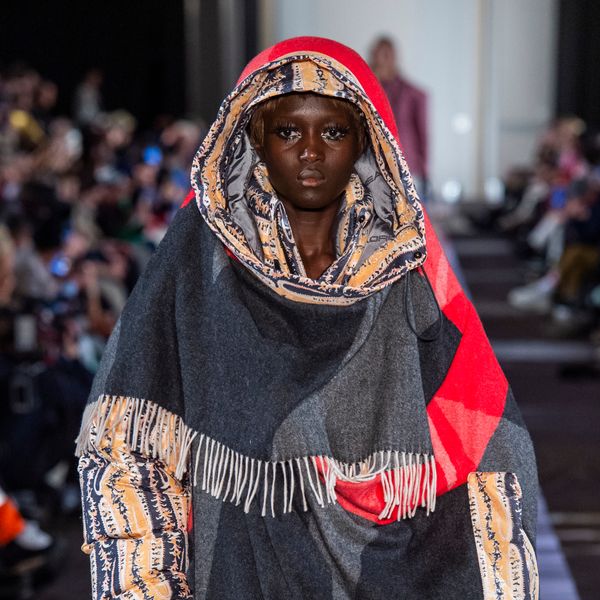 The invitation for Andreas Kronthaler for Vivienne Westwood's fall 2019 show was literally a printed full-frontal nude of Kronthaler himself. That said, the collection paled in comparison when it came to shock value, even for normal Westwood standards. Held in the ultra-corporate Hyatt Regency in Paris, the no-frills show felt a little bit like the brand had spent most of its energy (and, budget) on its blowout London (slightly controversial and contradictory) protest-style show earlier this month. Still, there were unconventional silhouettes, quirky prints and cool combinations. Here's everything else you need to know about the collection.

Whether it was rounded, oversized jackets that resembled a hybrid between a blazer and a bomber, or free-flowing capes and loose trenches, one thing was clear: the outerwear made a strong statement.

Latex knee-highs or tights were on the runway styled on both genders in a range of color. On men, it made a striking contrast with visibly hairy legs and sneakers.

A slight Egyptian theme ran through the collection in the form of metal chain headpieces. There were also a lot of garments that were engineered to be worn over the head like a hood, like a form of body modification for the conventional silhouette.

When it came to technically stunning pieces that really showed the classic ability to reinterpret fashion design from the Westwood house, the innovative trousers with leather legs took the cake. They were basically a different kind of architectural chaps, straps worn around the shoulders.

We've plenty of diverse collections this season, but not as many that make age a part of it. This collection had several older models of both genders, which felt refreshing.