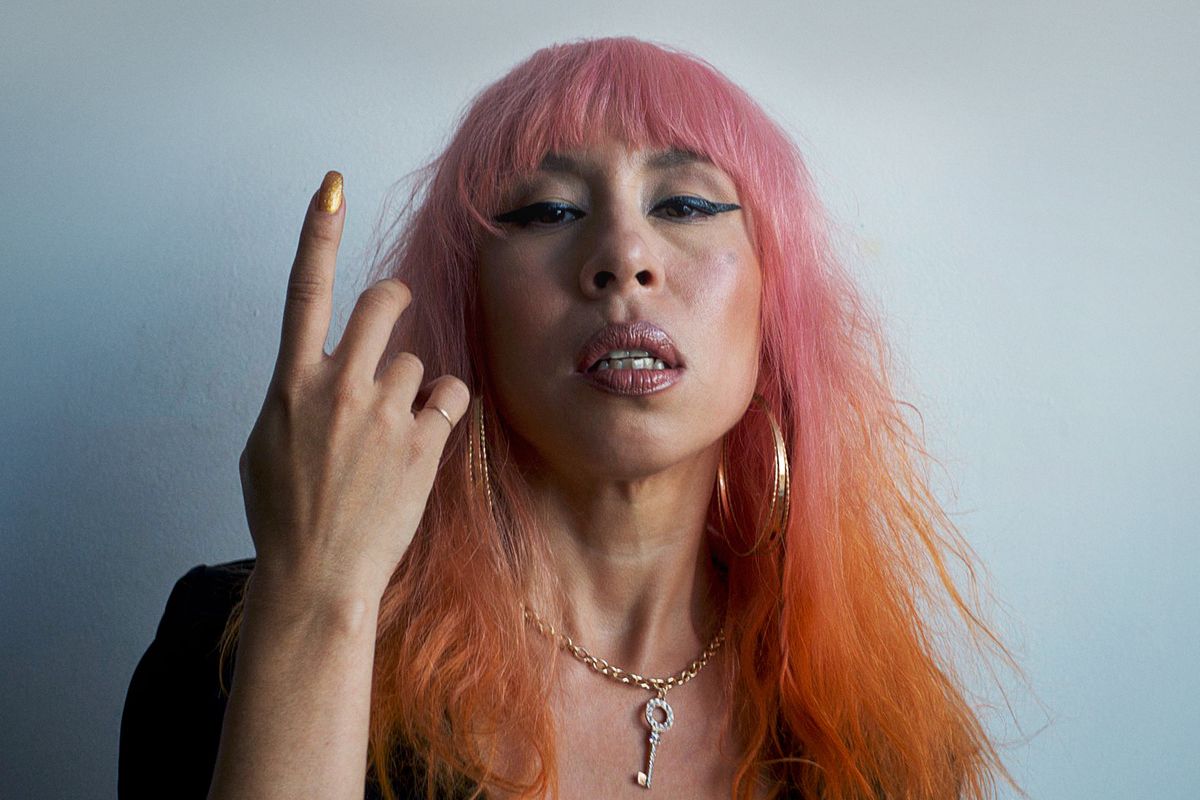 If you haven't been paying attention, the ongoing spectacle surrounding Supreme Court hopeful Brett Kavanaugh and the public testimony of Dr. Christine Blasey Ford's sexual assault accusations against him are, unfortunately, one of numerous examples of recent moments igniting the fury of many.

It can be argued that yes, as a society, rage is our current currency. But what to do with it? Some might say we all have a role: marching, organizing, protesting, canvassing, debating, art-making — it all matters.

Taking to heart the idea that rage is indeed sacred enough to be expressed through art are renowned Brooklyn-based producer, DJ, and activist Lauren Flax, and Ecuayorquina artist and advocate Viva Ruiz. Flax and Ruiz are friends and creators whose paths first intersected in Berlin's vibrant nightlife and performance scenes. A bond formed that has followed the artists over the years to New York, and transcends America's current state of affairs. Nevertheless, Flax and Ruiz are tuned in to what's happening. It is not shocking that the righteous fury of American women (especially the most marginalized among them) is spurning powerful movements — #MeToo, Time's Up, to name the most visible examples — for which the time is now ripe.

Enter "Archangel," a buoyant, urgent house track by Flax elevated to spiritual heights by the impassioned testimony of Ruiz, whose spoken-word lyrics are an undeniable call-to-arms. "Who did you come to be?" Ruiz asks. "Love is a clenched fist ready to strike," she says in a later verse. As a whole, the song is unapologetically confrontational of a patriarchal society that still demands women and femme people silence themselves — with consequences ranging from questioning to violence against those who come forward (and those who never do) remains prevalent.

No matter what you believe, the fury in "Archangel" demands to be heard and felt. Listen to the track below, and read on as Flax and Ruiz share about the track's divine creation and the sacred, mobilizing sides of anger.

Where does "Archangel" come from for you, and how did you decide you wanted to make it together?

Lauren Flax: For me, I never know where tracks are coming from. I draw on what we're going through everyday. So I think the last two years of my life I have written a lot of really heavy songs that are a lot harder than I normally create, because I'm honestly just so angry. As this track was shaping up, it just made sense for Viva to be on it. I said to her that she wrote this track for me. And then when Viva came over to record the lyrics, it was otherworldly.

Viva Ruiz: I was walking in Lauren's neighborhood, and it was freezing cold, and I was talking out loud to myself about x,y, z things that are terrible, because it is incomprehensible how terrible so many things are. Then, I got this text and it said, "Hey do you think you want to rant over a track." So the word "rant" was in there and I wrote back all caps, "I'm talking to myself out loud right now." So, in many ways, it was already in progress. Everything I do creatively and in my work [with Thank God For Abortion] kind of tells me what it wants to do next, because also I'm craving it; I'm asking for it. I do believe in ancestors and being guided and there's a lot of guidance around this track and a lot of ease in how it all came together. I think it's easy, fun, and it's who I am, and I know this is who Lauren is.

The song feels like a permissive channel of rage for women, specifically women of color, femme and nonbinary people, in light of all that's coming out about how oppressive patriarchy is. Choosing to name the song "Archangel" makes the track also feel like a prayer, regardless of what one believes. What was your intention for this song?

Ruiz: Hannah Holland, who owns [London label] Batty Bass Records, knew me from the track I did for her label with The Carry Nation, called "This Bitch is Alive." I feel like she knows who I am and we've been on the dance floors together, and that was nice that she thought of me for this one with Lauren. I should say that I did agonize over the lyrics, because I did want it to be like a prayer, as you say, and it was exactly where I am and also very magical. The day we recorded, I had chills all day, and when I got Lauren's place —

Flax: My place may or may not be haunted, but I told Viva don't mind it, it's all good here. [Laughs]

Ruiz: And I was like well, I am inviting whatever spirits are present to the party, and we totally did: we prayed, I asked for truth to come through and whatever else needed to come through in that moment. So since we were already on that frequency, we came up with the title there. I mean, what can I say? We are angelic, and we have weapons. Anyway, when I left, Lauren texted me that the Black Mirror episode she paused while we worked was from this season, called "Arkangel."

Does this collaboration signal future work together down the road?

Flax: I can't wait to do this live. I am currently putting together a live set for the future, starting next year, and we'll definitely be doing this track and I hope others together.

What do you hope that people gain from listening to this song?

Flax: I'd like for people to gain what I gained out of this, which is acceptance in the fact that our rage is sacred, too. I took so much from the lyrics. I learned for myself that it's okay for us to be angry; it's good for us to be angry; we have to be angry. It's what we do with anger that really counts. We have to be together in solidarity, and we have to fight. There's a long road ahead, so we can't just fall apart, and we can't just sit around and get fucked up. I accepted my darkness as sacred. There's a lyric in the song: "Love is a clenched fist ready to strike." It helped me accept this process as something sacred, one that involves us channeling this anger in a positive way that can reinforce all of us.

This track sends a strong message to women, especially those who've heard their whole lives that being loud or being heard is something to be ashamed of.

Ruiz: Yes, especially women of color, Black women who are stereotyped as angry no matter what. I'm going to say yes, we are encouraged to be ourselves. It's completely contrary to think that we have to be quiet and obedient. So, here I am blessing your rage. I was listening to a panel about activism and guidance that Sarah Schulman was on and she said something I will never forget: "be effective." To me, that's so economic. Rage is a really wonderful fuel for work and for change and also it is appropriate. Like, if you're not angry [with all that's going on right now], I don't really understand you. I need to see rage and action. Now I can play people this song, and I don't have to say anything. And going deeper, what is God's love? What is love? Love doesn't let people be harmed because they are not white, love doesn't let people be harmed because they have a uterus. That's not loving. So yes, love is a clenched fist ready to strike. I bless people's rage. There is a place for righteous anger, and we're in it.