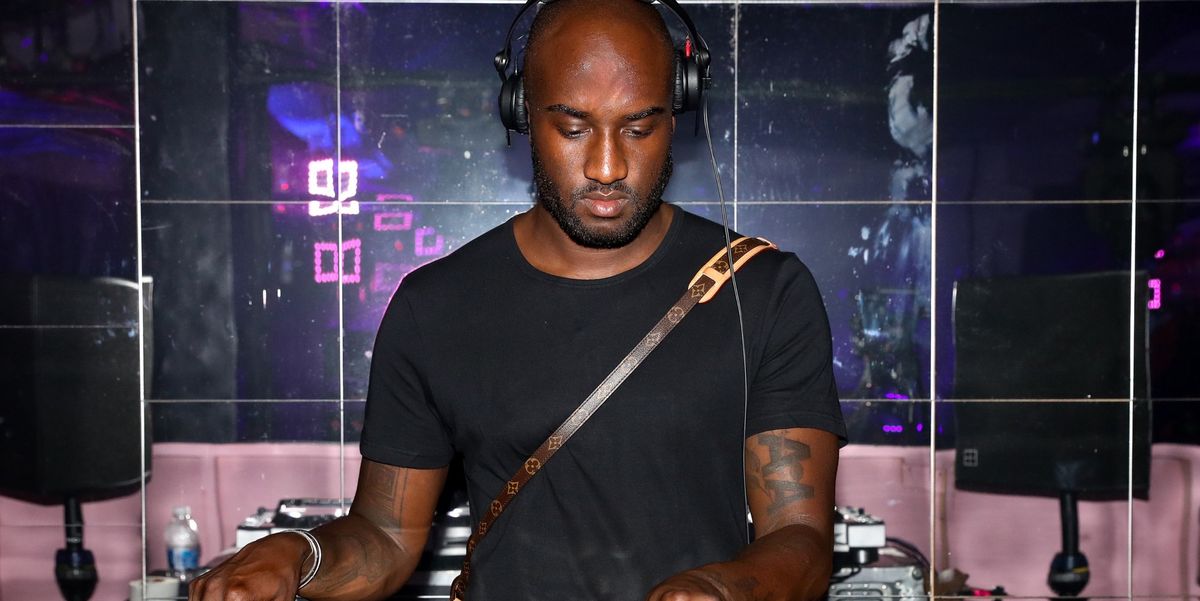 Over the weekend, we traveled to Pennsylvania for the Ray-Ban x Boiler Room Weekender -- a 3000-person getaway to the Poconos's idyllic (looking) Split Rock Resort that hosted performances from the likes of Kamasi Washington and Blood Orange. But the biggest draw for many was the event curated by frequent Kanye West collaborator, Off-White designer and creative powerhouse Virgil Abloh, who brought the likes of No Vacancy Inn, Mobilegirl and Totally Enormous Extinct Dinosaurs (for an all-vinyl jungle set!) to a bunch of mountains in the middle of nowhere for only the most diehard of heads. And while Abloh doesn't produce, he's proved himself to be a skilled curator when it comes to up-and-coming sounds via his "Flat White" DJ moniker, and, as such, spun a diverse, genre-spanning, hour-long set. Before he went on stage though, we were lucky enough to catch him for a brief moment in his hotel room upstairs for a chat about his musical endeavors -- all while he was putting the final touches on his set, no less.

That said, following our talk with Abloh, the Weekender was unfortunately shut down early after local police and resort security took heavy-handed and, according to Boiler Room, unauthorized measures against attendees -- particularly against people of color -- resulting in one (unnecessary) arrest and several injuries to guests. It was an incident that put a damper on the utopian goals of the weekend and continued to prove that the racialized war on club culture and all of the diversity it entails is still very much alive and well -- especially deep in Trump country. That said, we wanted to share our interview with Abloh about all the positive things that have come from the democratization of club culture -- specifically related to how young people are the ones propelling it forward and making it into some of the most exciting stuff in pop culture today.

Kanye obviously is known for always having an ear to the underground in terms of club sounds and music, and a lot of people have speculated that you've had a hand in this? Is it true?

He creates in like a space where he is always in tune – he asks a lot of questions. My job with him is in creativity and suggesting things -- what I see and what I hear. So yeah, in a way, we collaborate in that sort of sphere. [The stuff I encounter from Bromance], the techno record label that I'm on, and from me being out and about, and actually like playing records, it's great for our dynamic of suggestion.

There's not a whole lot online about your musical endeavors, so I'm curious as to how you got your start DJing?

It all started as a teenager. I was big into like turntablism during the 8-track era...so I was into, like, the hip-hop element of DJing. And while I was skateboarding and stuff that's what I was listening to. [You know, just being] a teenager in the 90s. I've been doing that since then. These were my pastimes. I would joke and say like DJing is like how our parents would play golf or something like that. Like, all my friends are DJs. It's like what you do, for our generation -- selecting songs for a house party. It's how our generation communicates.

So is that how you stumbled upon Boiler Room?

Yeah, Boiler Room just came about [since they're in tune with the] hard work we're doing in the streets. So, in a way, it's great format – I enjoy it because it's a way to document what's going on...And, you know, they found me. Like [Boiler Room host] Skinny, he was always like, “Hey, let's do something." I'd met him at some night, and he was like “Oh, come do Boiler Room," and the first one I did was really instrumental in my DJ career. It sort of showed people that assumed that maybe I didn't DJ what my sort of vibe was.

So how do you prefer to discover music? Like are you just like a Soundcloud trawler, or have another avenue?

Trading with friends. I get inspired, and I'm like – you know – this is a good route to go down or something like that. But then, as well, I'm in tune with my friends, and I'm sort of like, "Hey this is popping right now – have you heard this song? You should check it out"...It kinda varies.

I'm actually pretty impressed. I was listening to a Flat White mix from a little while ago, and it was like wow, you got all the elements – you got the grime, you got some house in there, everything.

Yeah. I like to play in an open form. It's just not in my nature to play linearly. You know, I wish I was a DJ that could stick to one thing. But my brain just sort of scatters. But to me, it's like a mood board. So it's more "this is what I'm into," and I'm into a lot of different things.

Well, I feel like that's more authentic too – like, a lot of times people just play straight techno or something.

Yeah, maybe it's like more millennial or something -- to be sporadic.

Speaking of which, you know how club culture has really sort of evolved in the past couple of years, and has become more based on identity politics and the social aspect of things. What do you think about that? Does that play into your work at all?

Yeah – I don't know. I don't look at music in that way. Of course, it exists, but I'm just more about the idea that our current culture should have great club culture. It doesn't matter what the makeup of the crowd is, I just think our generation doesn't have [the same thing as] the Studio 54 generation. I mean, it kind of does, but I feel like it can be more exemplified by just loving the art form and putting on good club nights that our kids can get into and embrace the music.

Right, but in a sense that's an argument for the democratization of club culture -- which is a component of a lot of the conversations happening around identity politics.

Well, you know, I'm not a promoter. It's important for me to just focus on being a better DJ, and being more inclusive in the vibe.

Right. So, speaking of your inclusive vibe and taste, what are you listening to now?

Everything, from Frank Ocean and James Blake to random techno that I find on Soundcloud.Travis Scott to Lil Uzi. Migos. To me it's a great time in music, I've always looked at it as this culture in young kids's hands. It's gonna go far, you know?

Definitely, and speaking of the younger generation, it has been really interesting to see American youth co-opting club culture, which has predominantly been a pretty European thing for so long. But what do you think is sort of the next step for us all stateside?

Yeah, I think we're seeing it by tonight. Like, look at this lineup. It's crazy good and it's not typical. I think that if this becomes a trend, we're in a good place.

Right, but at times it's also hard to ignore how industry and head-centric it is downstairs.

Yeah – that's the hurdle of this sort of thing, because we're in the mountains two hours from everything. But it's an experiment; the success of this is bringing together people who love music and will come and stay at like a random hotel. You know, this could be the new format for Woodstock. Coachella is not going to work – that's had its moment -- and it's not going to be culture-defining. This is defining -- they're kicking the doors down by saying all DJs in a hotel and you take it all over. This could be the new, like our children will be talking about, “Man they used to come over this hotel..." You know, that's the sort of top-line goal.

Right, so for your history-making set downstairs, what can we expect?

It's going to be cool, you know. Let's see – I'm trying to find this one song that we were playing earlier that was crazy...[groans] but it's not on here. Yeah, you're seeing the hard part.

I mean, people do really underestimate how hard it is to actually DJ.

Yeah, you know on some level it's easy, but as you can tell, there are really good people that are like at a certain, professional level of it. While you're playing, you're scrolling through every song that you have to put a good 3 songs, perfectly together. I spend a lot of time doing it. At this point, it's like I started doing it just for fun -- not like to transcend or to come up the ranks or anything. But I've gotten better at the amount of DJing formats that I play in. I'm happy with my skill set, but of course I want to be even better.

Definitely. So speaking of which, I know from previous mixes that you're also quite the grime fan. What's being witness to the revival and American popularization been like?

It was perfect. It was like a personal dream of mine to like do songs with...one of the only songs I've done was with Skepta. [Other than Skepta, I'd like to collaborate with] any of my friends. But, you know, two years ago, I found [Skepta] in the club. Well, not found him, he like came to a set that I was DJing, and he didn't know that I was like a fan. I knew who he was from way before. I've been listening to BBC radio for like 13 years; so I've followed grime from when it was just a UK thing...Just through being friends with friends...[But, you know, this] time is a better time for culture than ever before.

Why do you think that's the case?

You know, the Internet and southern rap changed the vibe -- maybe people adopted different accents. Like, before in the 90s, you had to be from New York [or LA] to rap. But then when Southern rap [started, it was like] kids from St. Louis making rap songs. And this younger generation was like, "We don't care about being from New York." And then you get people like myself doing shows at during Fashion Week with Skepta. I go to London, I meet up with him, and we do this song in like an afternoon. It was just like a remix that he was like opposed to, and like a new verse, and just put it out – all pieces of a puzzle.

Okay. One last question, where did the name "Flat White" come from?

I was in London, and I was like in a coffee shop – my friend ordered it, and I was like, that's a good...It's just that I like color. Like, it's a color -- people put so much meaning on it. I like the genericness of a color. Any color – I have different projects under different colors.

So there's going to be a Magenta sometime soon?