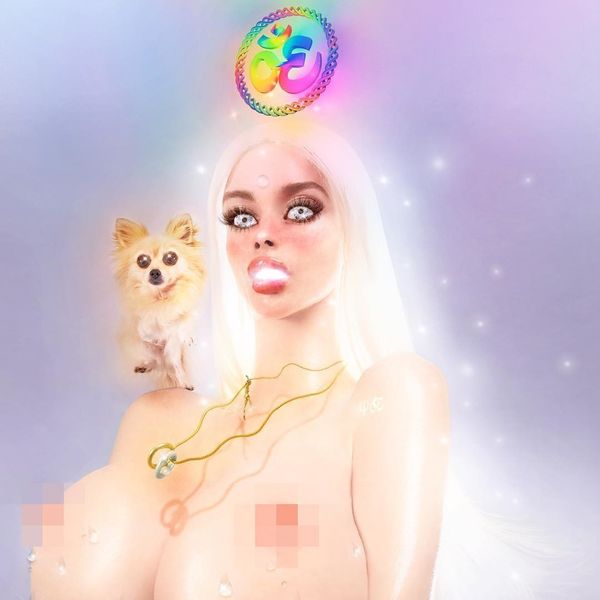 Virgen María Will Captivate You

A single scroll through Spanish-born Virgen María's Instagram is like spending a K-hole on a nude beach, but every shell and shark tooth you come across is a Swarovski crystal or a diamond. Her selfies are wildly unpredictable distortions of the voyeuristic gaze that often accompanies platforms like Instagram; she captions a photo of a light beam shining out of her pelvis with the phrase, "PLEASURE is NOT GUILT." She's in total control of your sense of sight, shutting it off and on, redirecting it, and confusing it for her explicit artistic inspiration. She is becoming, in perfect time with your scroll, your God.

It just so happens that G.O.D. is the fitting title of Virgen María's newest musical project, and it is something of a spectacle. G.O.D. means "Good Opening Drug," and "it elevates-alters your consciousness in a healthy way," María says of the title.

"Knock, knock. Who's there? Instagram," she whispers along to an revving engine on her track, "Love," featuring bloodvessel and electronic mystery, perth Daijing. This is before, of course, the slap in the face that is the distorted bass and staticky undertones that begin to encroach upon her spoken word. When asked what G.O.D. meant as a project, María says, "It means the start of an infinite espiritual preach about freedom through nudity and sex."

She muses, "God brought us to the world naked, that's our natural dress. Naked you have sex, and sex creates life, why should we be ashamed of our body which is a creator?"

The majority of the tracks on G.O.D. fall in line directly with this vision in their theming, but each one is wildly different when it comes to composition and intensity. The song "Yoga," for example, is nothing like "Love" in terms of participating in some common soundscape. When all of the hits, hats, and tones are combined, the track is everything but the peaceful act it's named after. Downward dog becomes a sonic contortion, a trap that ensnares your eardrums while María commands you to "breathe in" and "breathe out."

"Trinidad," the final track on the album, is a much more observational track, far less confrontational than its company. Slow tones sketch out the intro, before there's a drop into heavy hits, as can be expected from a María track at this point in the project. There is, however, a comfort in the overlapping look the final track takes at the other elements in G.O.D. No longer are listeners at the mercy of María, but they are able to settle into the soundscape. That is, of course, if they aren't enchanted enough to dive back into the album a second time — an unlikely scenario due to how circular her techno influence becomes by the project's conclusion.

"I knew the words I wanted to preach and my music influences: gabber and reggaeton," María says. "Perth Daijing and me met, it was magic. G.O.D. started having musicality continuing after with producers BLOODVESSEL and Yegua, who created the intro and Paul Marmota created the outro."

Virgen María possesses the level of intensity within her sound, image, and words that the world's most skilled artists envy. She's able to paint a visceral image across every medium for someone who might've only heard about her several minutes they clicked on her Instagram, or before they watched her take her rightful place on top of a mixer. Virgen María is taking techno, combining it with ASMR, making it do a backbend, and then crushing it under the weight of her demands.