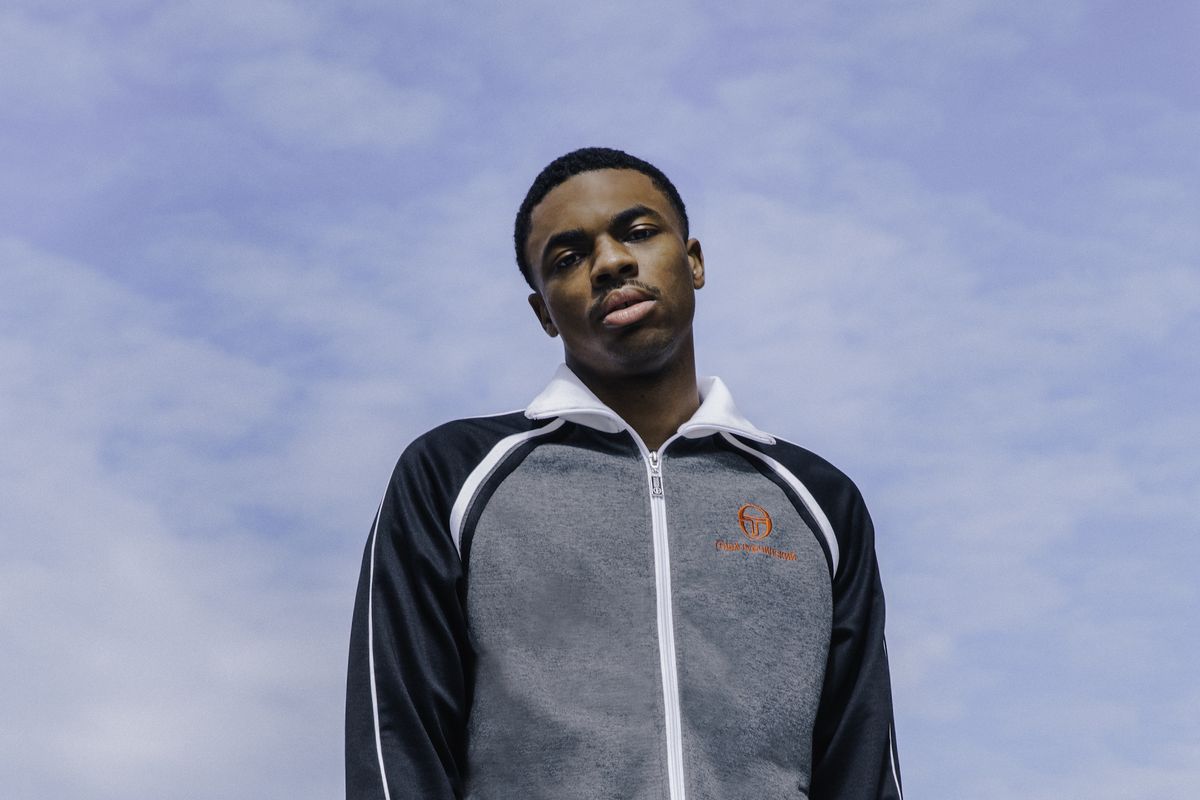 Vince Staples Thinks You Should Never Believe Your Own Hype

While a lot of artists who have been touring off and on for three years might feel burned out, Vince Staples has not only pushed through the fatigue but also managed to be prolific. In the time since he first went on the road, the 23-year-old rapper has released a mixtape, two EPs and an album. But beyond his stamina, the tenacity of the Long Beach, California native -- who's admitted he never wanted to be a rapper -- is impressive. After a short-lived adolescent stint in the 2N Crips gang, Staples found refuge in rhyming after befriending Odd Future's Earl Sweatshirt and Syd. His 2015 debut album, Summertime '06, won a slew of fans and critical praise, and buzz has been building ever since for its follow-up, Big Fish Theory, out June 23. But Staples says he hasn't let any pressure to top his debut get to him. Nor does he take himself too seriously. "I don't think I'm ever that proud of what I've created, because I feel like it could always be better. Once you get proud, it's like smelling your own poop," he explains. "Never believe your own hype."

What's the biggest priority for you right now in your life?

My priorities kind of tie in with everyone else's. I'm just trying to get better at what I do everyday and be a better person. It's the obvious, but just on a level of creativity and creation and being able to accept your own ideas, because that's a hard thing to do sometimes. And figuring out a way to push forward through everything without getting discouraged or disheartened or angry. Just trying to stay the course of creativity because it's hard to push yourself when you are dealing with ideas that you fully formed. It's not much help in the early development stages of an idea. So I'm just trying not to give up on certain things.

On the topic of pushing yourself and creating new things, your follow-up to Summertime '06, Big Fish Theory, is coming out on June 23rd. Is there any pressure to deliver something that people praise just as much, if not more?

No. I never feel pressure because someone else makes it. If you're chasing something or if you're doing something that's not organic to yourself, I think that's where pressure comes in. But if it's just you, then it's just the next step of you. And we're at this point in time where the way music works, people are just buying into identities at this point. They're not necessarily buying songs. So if they bought into something that you're selling and it's actually true to who you are and it's true to yourself, you'll be fine. It's nothing to really worry about because it's hard to… It's like when you tell a lie you have to keep up with your lies. That's basically what it is for the most part. If you're not making something that's pure to yourself or what you want to do, eventually people will be able to tell. But if they listen to music and the authenticity of it is there and the emotion of it is there, and just the love for what you do and what you create is there from you, then people will see that and they'll embrace it. The pressure lies in the other bullshit, and you can just stay away from that.

You've been candid about the fact that you never sought out to be a rapper. What's your motive to continue putting out music?

I don't know. Half of it comes from negative space because as a kid I never really needed a motive to do anything. It's just like if I was going to do it, I was going to do it. I happened to fall into just by being around others and following the lead of people I trusted very much. They were like, "No, you can work at it, and we'll get some money off of it."I got a bit of money and was like, "Okay, let's figure out putting my family in a better situation." Now my motive is just creating to create music and new things. I think that's what keeps me going. It's always been different things; it's never been one thing specifically. And I've never been a real quitting person. It's not really what I do. So the second I don't want to do it anymore, I'll stop doing it. It's not like a burden. I'll go get a job. I'll be fine with that.

What's the last thing you read, heard, or saw that inspired you?

I think the last thing that I saw that inspired me was probably the Amy Winehouse documentary. That was a couple of years ago. I don't really find many things that inspire me from the outside looking in because I don't consider myself to be a part of those things. I don't see things and be like, "Oh, this makes me want to do this." Everything I find is more internal and I'm just a viewer of other things. So if I see someone else's music, I'll never want to make that song because I want to listen to it because I like it. It's not what I want to make. So it kind of slows the process a little obviously, but it's not much music that I listen to that inspires me. Or movies.

How do you see yourself evolving as an artist and as a person?

I don't know. I just want to get better every day. I just want to evolve every day and become whatever I'm supposed to become. I don't really have any plans. So whatever it is, I've gotten into a place being comfortable saying that. I'm an artist; I can create things. And I'm also comfortable saying there's no one that does what I do. And no one that can do what I do because it's so personal to me. Unless you live my life, you can't do what I do. And I feel that way about everyone. I feel like no one can do what Young Thug does. No one can do what Adele does or what Beyoncé does because it's so close to them. And that's what makes people special.

You've been involved in some philanthropy -- can you tell us about it?

To be honest, we haven't been doing much lately, which sucks. But last summer we connected with the YMCA and Youth Institute of Greater Long Beach, gave the kids some equipment, helped [create] a music program there because that's what a lot of them want to do. They had been trying for a long time to just access the money for the resources so we helped with that. We've been working close with some people within the city of Long Beach, too. They're trying to throw festivals and things like that within the city. Not just a music festival, things to get people together and kind of show a sense of camaraderie. I know in 2015, Long Beach was one of the worst places to raise your family in the state of California -- like out of 250-something cities. So I'm very much trying to help my home getting better.

What's been one of your proudest moments in your music career?