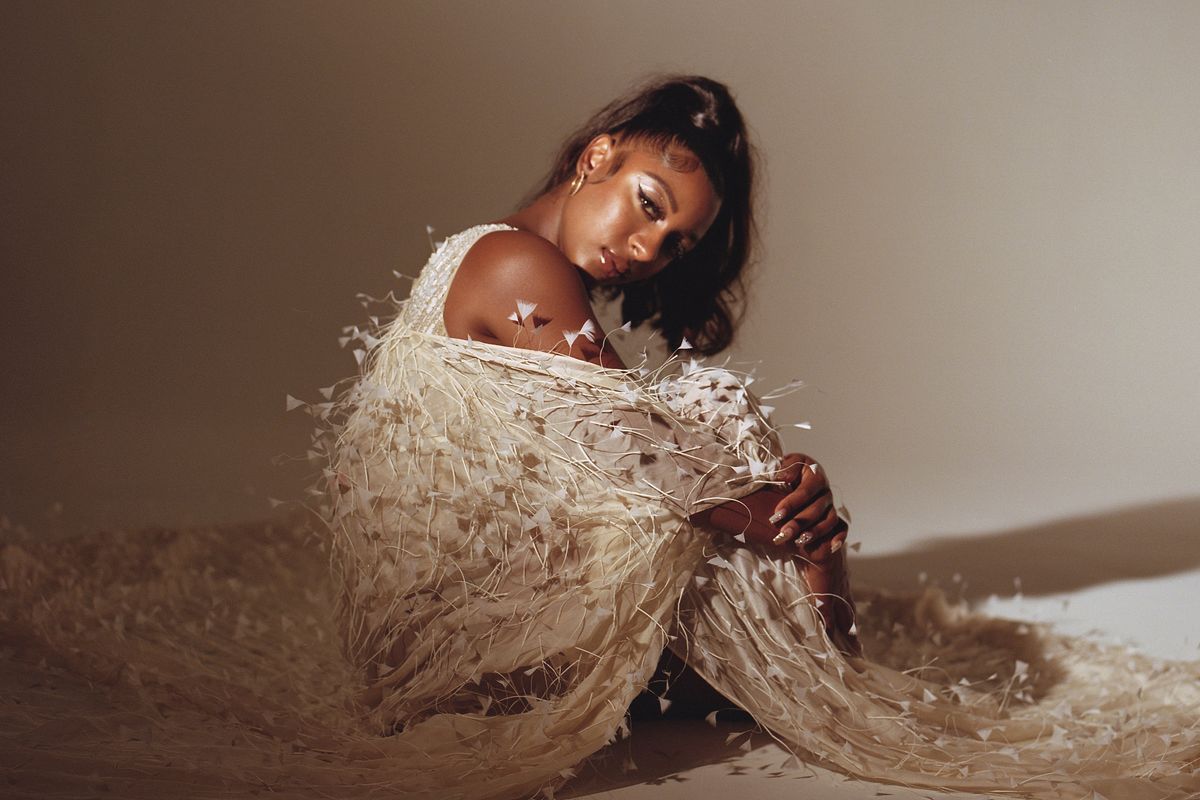 Victoria Monét Is Basking in Her Moment

Songwriters are, quite literally, the unsung heroes of the music industry. While their lyrics and melodies propel superstars up the charts, they're often kept hidden behind the scenes. That was initially the case for Victoria Monét. After her girl group Purple Reign was dropped by Motown Records in 2009, she paid her bills by penning songs for the likes of Diddy, Nas and Fifth Harmony.

The 27-year-old's biggest collaboration (and friendship) has been with Ariana Grande. She received four Grammy nominations for her work on Grande's acclaimed 2019 album thank u, next, including the title track, "7 Rings" and "Monopoly", and her own star is finally on the rise as a result. After independently releasing four EPs since 2014, she is stepping into the sunlight with her new project Jaguar.

Out today, Jaguar's nine tracks glisten with Afro Sheen and naughty imagery, as Monét channels her inner Motown diva alongside producers like SG Lewis and D'Mile. From the shimmering disco ball that is "Experience" featuring Khalid, to "Touch Me" soundtracking the sunrise after a hook up, and getting down with the boogie on the title track, Jaguar breathes life back into the glamorous '70s era. Monét cuts through the go-to synthesized beats by opting for live instrumentation: passionate horns, the heartbeat flutter of drums and soaring strings.

"This project was my playground," she explains over Zoom. "I felt like a wannabe Quincy Jones." The emphasis on production means she's able to use her soft voice ("I don't have the strong vocals of a Beyoncé or Whitney") to her advantage, facing off against the horn section. "It's a nice stage for me to really just float on top of, and also give space to the musicians," she explains. "I'm thinking about the live show too: 'Okay this is the breakdown where I interact with fans and dance and not have to worry about being out of breath.' I'm thinking about how a Bruno Mars or an Earth, Wind and Fire show would feel."

Monét's eyes widen as I refer to Jaguar as her own version of Motown's heyday. "One of my favorite people of all the time is Smokey Robinson. So I'm looking at his pinnacle of success," she explains. "He was a songwriter and an artist at the same time, and equally as great. And that's what I really want for myself, just to be able to balance that out and really give my gift to other people."

She continues: "I also just like the foundation of Motown, being able to have a community of Black people — executives, songwriters, artists — come together to really change the music for the world."

Monét has also embraced the '70s through Jaguar's aesthetic: her music videos, promotional photos and outfits are tinted with warm browns and golds that match her honeyed vocals. On Zoom she's wearing a vintage style scarf over her pin-straight hair, like inspired by her grandmother's style in family photo albums. "So it's repeating what my elders did, but also trying to make it my own," she says. "I like the Black power and soul that the '70s exuded. I really wanted to capture that beauty."

Jaguar is defined by sexual power and a newfound self-assurance. "Moment," one of the EP's highlights, is a personal declaration of self-worth. "If you take the hook and make it a single phrase, I feel like it's so widely applicable. It's a moment to thrive, to change your life," Monét explains. "It's somewhat of a self-affirmation: you look in the mirror and it's like, 'Now is the time.' It brings this urgency. But also in a sexual light, it allows for a woman to treat themselves like a prize. It's like, 'Do you know what you're getting the chance to do right now?'"

Discussing the song triggers an unexpected rise in emotions in me. But Monét's presence is soothing, and she virtually wipes my tears as she notes the power of energy and manifestation. "When people are singing it, whether consciously or subconsciously," she assures, "you're starting to speak about what you want for your life. Be present in it and realize that this is where you belong."

With Jaguar, Monét "spent a little more time consistently writing for myself." When fans heard projects prior to Jaguar, she explains, "You would be hearing me having this writing camp for somebody else. I was trying to make a living, and my artist career wasn't as promising as being able to give yourself to someone who already has a fanbase and a label who can push the song to the masses." To invest in herself as an independent artist, "I really had to take a leap of faith."

"I want to make sure that the people who are also in the LGBTQ+ community have someone who, when they don't feel strong enough, to say that they see the love and support... I'm proud to be a part of this movement — there's power in numbers."

Monét's sense of self-assurance has grown since coming out as bisexual in 2018. "Growing up being attracted to a woman, it felt like I was trained to think of it as such a sin," she says. "I tried to almost convert myself: 'Hmm, let's just pack that feeling to the back.' So being able to finally reveal that, and still feel so much support from other people who also feel the same way, meant so much to me."

"Coming out was another form of preparing me to make this project," she explains. "I want to make sure that the people who are also in the LGBTQ+ community have someone who, when they don't feel strong enough, to say that they see the love and support. Feel comfortable enough to speak their truth. I'm proud to be a part of this movement — there's power in numbers."

"I was kind of treating my artistry as a hobby. So this time I wanted to switch my perspective on it. I feel more renewed and refreshed to write for other people now."

There's an underlying sense of relief when speaking to Monét, who emits featherlight giggles and raises her pitch when something during our conversation excites her. While she's appreciative of her work with artists, it's clear she needed this uninterrupted studio time. "I want to be careful saying this because I don't want it to feel like I'm ungrateful for the opportunity to be a songwriter, but it felt like self-care," she explains. "[Jaguar] reminds me that I'm a person of just as much value and importance. You can create your own wealth with your own talent. So don't be so hard on yourself and doubting that."

The experience has also renewed her passion for collaborating with other artists: "I feel like it was important for me to realize that I can do both. I was kind of treating my artistry as a hobby. So this time I wanted to switch my perspective on it. I feel more renewed and refreshed to write for other people now."

I ask whether the cunning animal in her new EP's title could serve as a metaphor for Monét's career to date. "I think you're right about when you say how calculated and meticulous they are, and how much they watch and observe before they approach," she says. "But they have this innate hunger. All of those things apply to me as an artist. Just being able to camouflage in the background, but also have your moment when it comes to really be in the middle of the light, go for it and really eat."

By being honest with herself, the singer is now basking in her moment. "It comes from being exactly who you are and receiving whatever love comes from that — or being okay with backlash," she says. "That would allow anybody to feel more confident, because there's no lie now. There's nothing to hide behind. I'm out of the jungle."