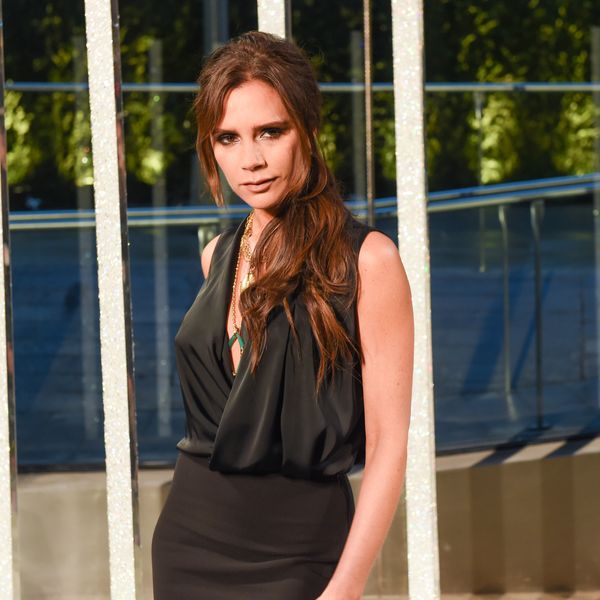 Just when we thought we couldn't be more obsessed with Victoria Beckham, she threw it back to her Spice Girl days, caught on camera rocking out to "Spice Up Your Life" in celebration of her namesake label's 10-year anniversary. Beckham rounded the corner of her decade-long milestone on Sunday with a show that was moved to the London Fashion Week schedule this year, as opposed to being staged in New York City where she has typically taken part in years past. It was only fitting, as Beckham is, of course, a Brit at her core.

Last week, she rolled out the red carpet on one of her most gorgeous collections to-date with a new advertising campaign that is meant to throw it back to her iconic Jurgen Teller photos for Marc Jacobs more than a decade earlier, featuring a series of photographs of herself in varying obstructed poses inside a gigantic shopping bag.

Related | Victoria Beckham Gave Us Everything We Really, Really Want

The campaign isn't the only way in which Beckham was looking back on her long and storied career, though, as she brought Posh to the party in after-hours celebration co-hosted by British Vogue. Wearing a tailored white blazer and golden pants as opposed to her alter ego's little black dress, Beckham was seen at her collection's after party dancing like no one was watching (and singing along!) to her own song, "Spice Up Your Life." Lucky for us, though, not only was an entire room of guests watching and dancing along with her, but the iPhone-captured videos are now all over social media so that we can play and re-play the epic scene to our heart's content.

You can watch the full clip below but spoiler alert: Posh has still got it. We can't think of a better way to celebrate a decade at the helm of one of the most elegant fashion brands in business today.

Paper Magazine on Instagram: “Omfg stop what you’re doing and watch this video of #poshspice getting her life to “Spice Up Your Life” during #lfw!❣️😩 @victoriabeckham…”