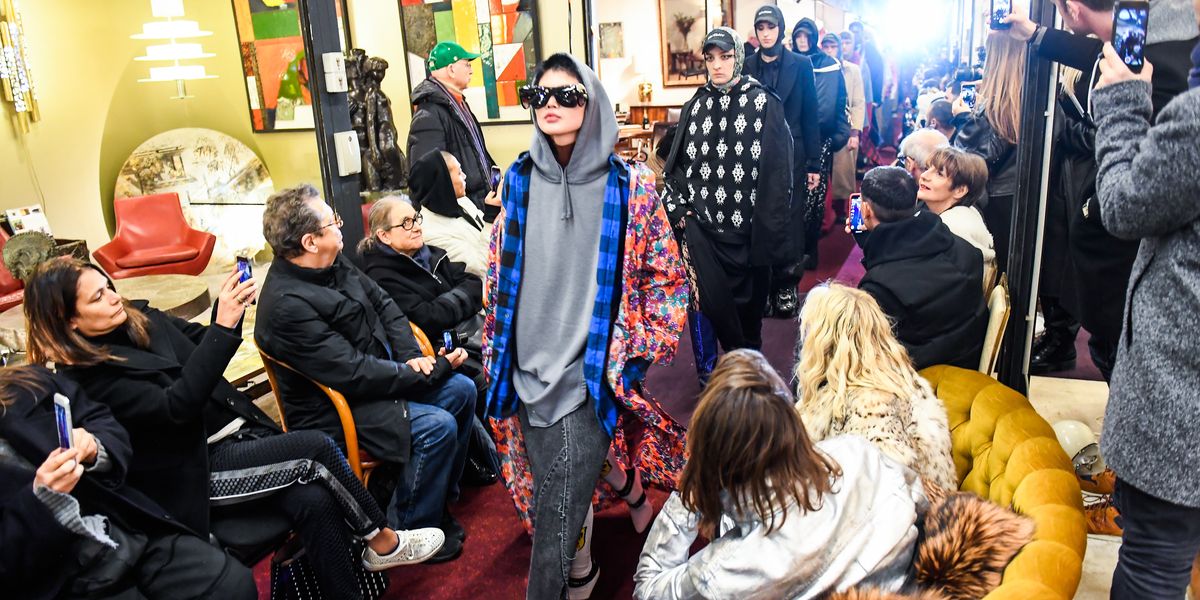 A Highsnobiety article reporting sharply declining Vetements sales from several anonymous buyers, "shop managers" and retailers shook up the fashion insider pocket of the Internet this morning, causing writers and industry folks alike to ponder the ever-present, existential question of our times: "What is hype?" The piece largely attributed the (allegedly) declining sales of the brand, famous for its novelty items that take shots at the insular fashion world sold at high fashion prices, to the move of its headquarters to Zurich, a lack of new ideas and its cost model. Think pieces about the longevity of irony, "gimmicks" and inside jokes within the fashion world (and beyond) poured out, with a general air of knowing non-surprise shaping the conversation. After all, what goes up must come down, and Vetements unlikely rise since it first sent a DHL shirt down the runway in 2015 has been a come-up tale for the ages.

Demna Gvasalia, creator and designer of Vetements and current head of Balenciaga, disagrees wholeheartedly with Highsnobiety's assessment of his brainchild, going so far as to call the piece "fake news," "wannabe journalism" and "lies and gossip" in a heated post on Instagram:

While the article didn't include comment from Vetements, a follow-up piece on Women's Wear Daily did. The brand's CEO and Demna's brother Guram Gvasalia refuted claims from anonymous sources like, "If you compare the amount we've spent on the brand for SS18 and the recent FW18 season, we've decreased the order by around 70%."

"To the disappointment of all the haters, we would like to declare that Vetements is in the strongest creative and financial state it has ever been," Gvasalia wrote in a statement to WWD. "We are definitely not going out of business and the speculations about our sales figures are not only false and defamatory in its nature, but also simply ridiculous."

For their part, Highsnobiety appeared to double down in a statement also provided to WWD, writing that the focus of their piece was specifically on analyzing Vetements' "ability to sustain marketing hype and relevance to our young, trend-conscious audience as it grows," and that in that regard, they remain correct.

"While it's impossible to quantify street cred," the publication wrote, "we have noticed a sharp decline in Vetements in our global street style coverage, and the buyers we spoke to, many of whom work at smaller, independent retailers, often rely on a brand's strength to help curate their offer, and cater especially to the type of discerning consumer we speak to. The moment a brand like Vetements ends up in larger, more mainstream retailers, it's a hit to their perceived authenticity. While Vetements is far from dead, to many in the industry — especially the selective market we cater to — it is 'over.'"

WWD went on to quote multiple sources on the record saying that Vetements' sales are actually not down, including buyers, executives and owners at Harrods, The Webster, Saks Fifth Avenue, Hirshleifers.

Diet Prada, ever the critical eye of the industry, pointed out that those sources may, however, have their own agendas for maintaining the Vetements hype, adding the important point that, "[T]o credit Vetements with putting streetwear on the map is a diss to the history of streetwear culture where clothes were made at accessible price points for more than just people outside of a fashion week circuit."

Diet Prada ™ on Instagram: “It's ironic that at a brand built on bootlegs is suddenly crying "fake news". Maybe it's all the caps, but it sounds like someone got their…”

So what is the truth? Perhaps as Diet Prada says, only time will tell. When it comes to hype in fashion, it's anyone's guess as to which wave will crash next.