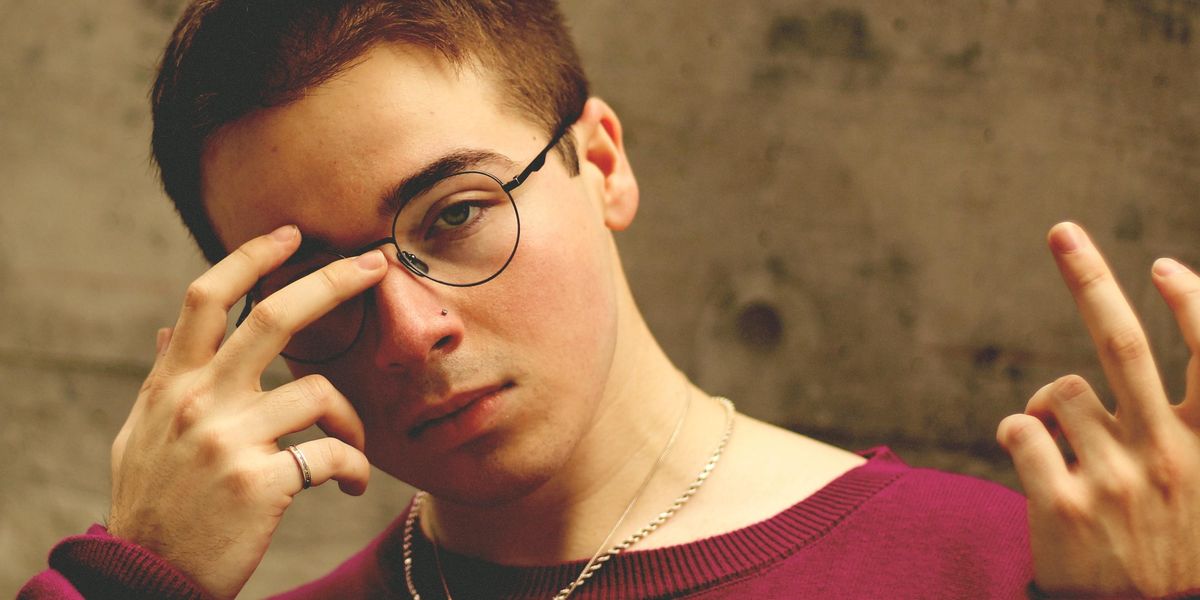 Zach Farache, known to his fans simply as Verzache, had one of the first real viral TikTok sounds when "Needs" garnered hundreds of millions of hits after names like Charli D'Amelio, Benji Krol and Tony Lopez set it ablaze in 2019. But despite its 120 million streams on Spotify alone, Verzache says he isn't chasing a hit ("I've gotten over the hump of trying to 'make more' of this") and instead has focused on putting out more music "that's honest."

The 23-year-old has spent the pandemic writing and producing 19 tracks for his 2021 album, My Head Is a Moshpit, which features lead single, "Messed Up," with its angsty, acoustic-driven sound. "That was a dope first single to choose," Verzache says. "One of my favorite ones from my album." He's since released two more tracks, "Calling," and, "Look Away," both of which reflect his bedroom-pop roots — that chilled out, melancholy sound Gen Z has taken to.

To better get to know Verzache, PAPER asked the self-described "regular dude" to review these 10 Versace styles (get it?), from swim briefs to bedazzled travel mugs. See what he had to say, below.

Yeah, no dude, oh that's pricey. Honestly, I like the pattern. I think it's sick. I would wear it. This is something that my girlfriend would probably get for me. But, I don't know, when. Hoping soon. The floral on the back is sick. I would wear this at like, a finale show, or like, I'd make a movie in my house and just wear this. And be like a character in a movie I make. But seriously when I was in quarantine I made some stupid video movies at home with my dad filming. I would definitely wear this robe in one of them. I have some ideas, so I see potential in this robe, you know?

Wow, that is confidence. That is what I call that. Dude, is it swim briefs? I mean, I would wear it as underwear [laughs]. I don't know if I would swim in those. I think this is for dudes, just ripped wearing these looking great, balling in this. Is that me? [Laughs] Nah.

Wow, we got these Baroque slippers. I heart Baroque slippers. Wow, that's Boujee. The yellow, you know honestly I wouldn't wear it. If it was black, the black color way, I would wear it. But this is not for me, dude. I'm taking a pass, a hard pass. But if they gave it to me for free, I'd wear them, ya know?

Oh yes, that's icy as hell. Dude, that's fire. I don't know what Starbucks I'm going to with this, but this is crazy. This is some shit you'd see Riff Raff holding. Probably Drake has a couple of these, couple hundred of these in his house... just for sipping. Sipping some juice [laughs].

It's actually sick. The patchwork is dope. I love the colors, the colors here. I feel like this is something I would wear in 20 years, to an event in like 20 years, if I was feeling flamboyant. It's time to make that move, ya know? This is my new phase. Yes, now it's time, now it fits me, it suits me. I have a big beard then, it will all make sense then. It will be cool. But yes, I think that's a fun shirt. Ya gonna get a lot of comments, comments and compliments. But yeah, I would not wear it right now.

Ok, wow. Ok. So, we have some colors to choose from. But it's not one color, it's a bunch of colors. It's tough, these are a bunch of out-there colors. Woah, the bottom! There is like a brain. It's like a Medusa brain. I love that it reminds me of Nike when they started putting those, there was like one year when iPods were coming out, when they started putting like the Nike chip in the shoes. That's what this looks like to me. This is a pretty cool shoe. It's out there, though. You're asking for someone, you're asking for attention.

Woah, no, no, no, not the half hat. No dude, stick to what you're doing. It reminds me of the guy from Batman. What's his name... Harvey Dent? Two Face.

It's big, but it looks pretty cool. The pendant, the Medusa looks cool. This is some bronze, though. They took all the pennies from Canada and made this, I think. We don't have any pennies in Canada anymore. It's only 5 cents, 10 cents and a quarter. Now, I know what happened to all the pennies. They took the copper and made this bracelet.

These are hard. I like these a lot. I would wear these as boxers and I would swim in them, but I would also wear them as shorts... outside, with, yeah, a hoodie or something. That could be cool. Yeah, this is a good product. Wait, it's $475. It's worth it though because I could use it for all those things: I'm swimming it in, I'm freaking sleeping in it, I'm showering in it. I never take it off, perfect.

Medusa Studded Bag, Ok, I get what they're trying to do here. You know, I need to look at the dimensions of this thing. I think it's cool but ya know, you're flexing with this. I'm feeling like a punk rock vibe. With the leather spiky bracelet. This is the boujee version of that. I could see like a PlayBoi Carti or Young Thug wearing this. If you're wearing this I'm gonna ask for a selfie with you. That schwag is pretty cool.