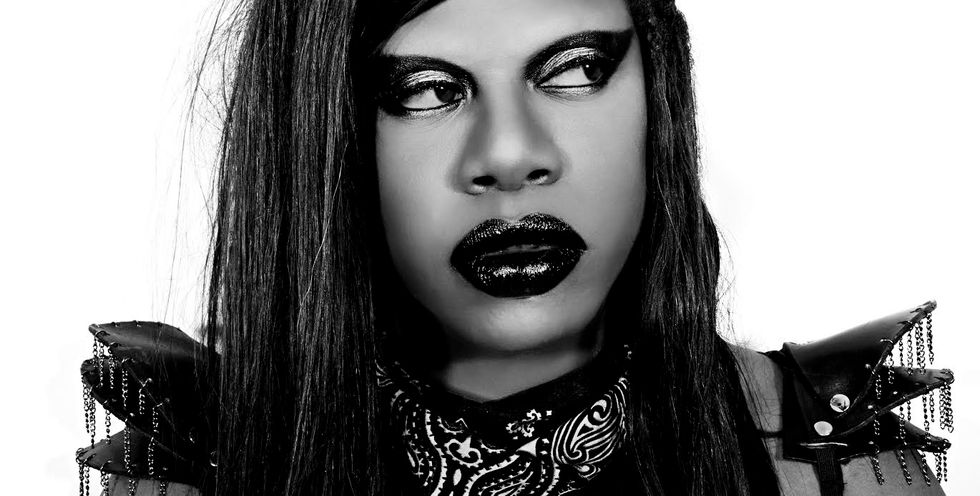 "Very, Very Somber!" Everything We Saw and Heard at Last Night's Art Openings

by Kate Messinger
PAPERMAG
After last week's Frieze art fair, our frontal cortexes are fried. One more discussion of Post-Internet art, one more handshake to someone you already forgot the name of but really shouldn't have, one more fancy cocktail with a cute paper straw that disintegrates before you can finish it - we all might just redefine the phrase "going postal" to "going art world." Lucky for all the overstimulated brains and eyeballs and nasal passages, this week's art openings were few and far between. The only real place to be last night, to really cure that week-long hangover, was in a dark room, surrounded by post-apocalyptic sculptures, listening to composer, artist and metal-meets-opera singer M. Lamar, the king of funeral doom, wailing about the death and destruction of white supremacy.

Some might have heard of M.Lamar as Laverne Cox's twin brother, who plays her character, pre-transition, in flashbacks on Orange is the New Black. But M. Lamar's talent is more than just family relation, he's created a whole new type of entertainment that blends sexuality, race and musical genres in ways that seem impossible. Last night he showed a work in progress, a piece called Destruction exploring the "apocalyptic themes in Negro Spirituals," and the possibility of death as a rebirth. A small crowd gathered at 601 Artspace, a gallery that prides itself on it's unconventional art work and collaborations, a strange combination between older academics, art students, and people off the street.


Lit by a single red bulb over his keyboard, M.Lamar wore studded black leather gloves, an upside-down cross, and a bandana tied over slick, jet black hair falling in front dark smokey eyes and black lipstick. He started playing the piano, a clashing of keys and deep notes, and began a haunting operatic chanting, the technicality of range only possible from being trained by the great Ira Siff (who also trained Klaus Nomi). "Now is my death day, my death day is now," M. Lamar belted. A large sculpture that resembled a toppled Pagan tower, from the gallery's current show From The Ruins, transporting the audience to another time and place, an afterlife where Nina Simone and Pantera do duets. We all watched in silence, until a group of SVA students bustled through the door and headed to the wine table. Then came some tourists unaware that someone singing about death in a dark room probably meant you shouldn't talk. "Very, very somber!" half-yelled one of the tourists, grabbing a block of cheese and bustling out, accidentally turning on the lights. M. Lamar didn't seem phased, his head still nodding in a slow motion head bang as he sang: "You'll hear the trumpets sound/ to wake the dead up from the ground."