Vanna White's Jeweler and Feathery Dresses at the UNRESERVED Showcase

Though the thought of collaborating with their mothers might be enough to make some designers light headed, mother and son jewelry designers Dylan and Veronica Poblano, who were among five American Indian designers who had work on display at the UNRESERVED American Indian Fashion and Art Alliance fashion showcase in the Bryant Park Hotel Thursday, love working together. "He can be difficult, but I'll do whatever he throws at me," Veronica said. The New Mexico natives use fluid, Zuni inlays and carving techniques in their pieces. Veronica, who counts Vanna White among her clients, works with coral and turquoise in her designs, while Dylan favors monofilament silver to create Art-Deco star bursts and cascading necklaces. Most of the designers at the showcase have work that have connections to their mothers.  Chickasaw/Creek bag designer Maya Stewart makes her hand-sewn, quilted and geometric clutches from lamb and pig's skin with her mother, who has items from her early 70s fashion line, "The Fife Collection," on display in the Smithsonian.Taos-based Designer Patricia Michaels, whose ready-to-wear line uses silk and charmeuse to evoke eagle feathers, learned how to sew from her gallery-owner mother.  Michaels said her clothes are influenced by the narrative aspect of Native American ceremonial wear.  "Each garment here has a story behind it, just like every traditional outfit has a story behind it. In a sense, it's retold on your skin." Jeweler Maria Samora, also a Taos native, works with two-tone metals to create cuffs, necklaces and earrings with geometric prints she says are inspired by the bold, clean lines of her home town. "I always test the pieces, that's really important. " she said. "Sometimes the earring's too heavy and after an hour you just want to rip it off. Jewelry is such a personal thing. It's not like a painting that just goes on your wall." 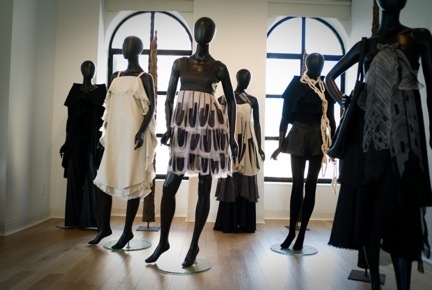 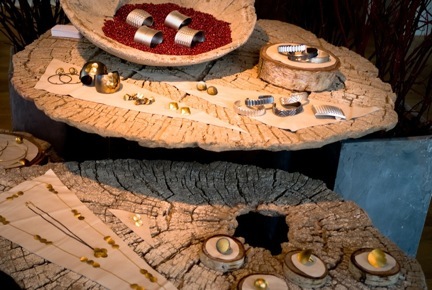 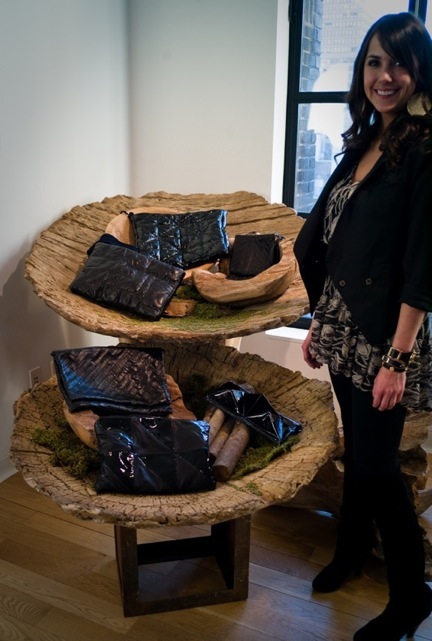 Previous Next
Maya Stewart with her purses 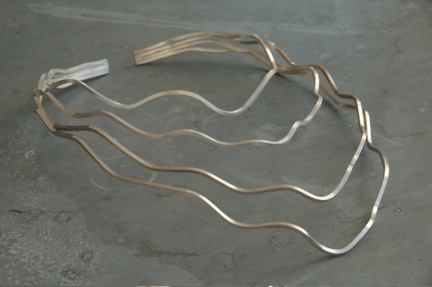 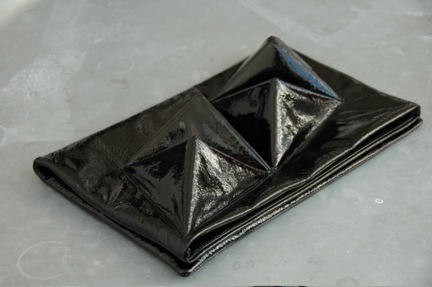