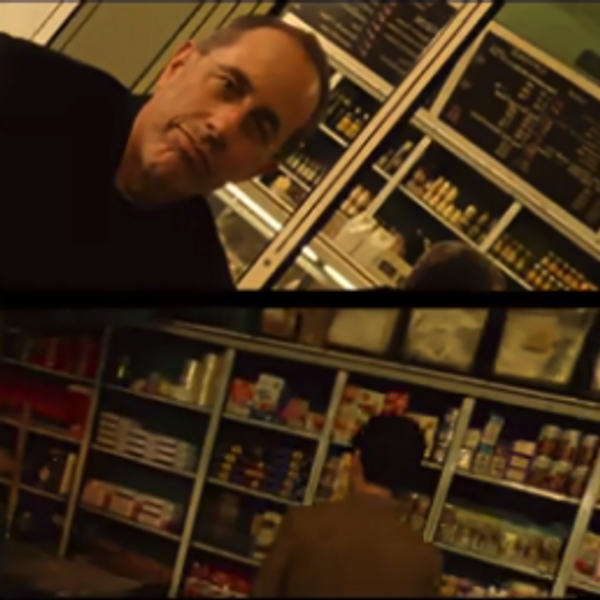 Jonah Hill is a hipster now, in case you hadn't heard. Bygone are the days of our schlubby Superbad and Knocked Up sidekick, or even more heavy-hitting Wolf of Wall Street comic relief. In the last year, he acquired a great tailor, some Warby Parker specs, directed indie flick Mid-90's, starred in "off-kilter" psycho-thriller TV series Maniac, and made friends with indie rock gods Vampire Weekend.

Hill's latest art project is the video for VW's new Father of the Bride noodling, jam-funk "Sunflower" (one half of their latest two-single drop along with "Big Blue," following "2021" and "Harmony Hall"). He previously had a cameo alongside Dev Hynes in the "Harmony Hall" video, in we had the pleasure of watching Ezra Koenig tenderly fed him fancy pancakes.

It takes place at two iconically Jewish Upper West Side eateries: Zabar's and Barney Greengrass. This is fitting, since Koenig and Hill are both iconically Jewish themselves and Vampire Weekend worships the city they came up in. Ezra and The Internet's guitarist Steve Lacy meet up for bagels and schmear as the topsy turvy screens splits into spinning, upside-down halves and then quarters. For good measure, Jerry Seinfeld, whom Koenig is notably a fanboy of and '80s hip-hop icon Fab 5 Freddy have cameos.

This all sounds great in theory! However, I will bravely come out and say that Hill's choice of queasy "psychedelic" cinematography, quirky split screen and "vintage" sepia filter makes the whole thing look a lot like the results of a high school iMovie assignment. Which is disappointing, because the whole concept is extremely me, as a Jewish VW/Seinfeld stan and semi-regular Zabars shopper. I'm not sure if Hill and Koenig were leaning into those Grateful Dead and Phish comparisons, or if the cheesy style is a commentary on how Vampire Weekend will never shake the college band title. I am sure there's all sorts of subtle ironies at play that I'm grumpily and willfully mistaking for bad art, but either way, I feel it is my right to sulk about this missed opportunity.