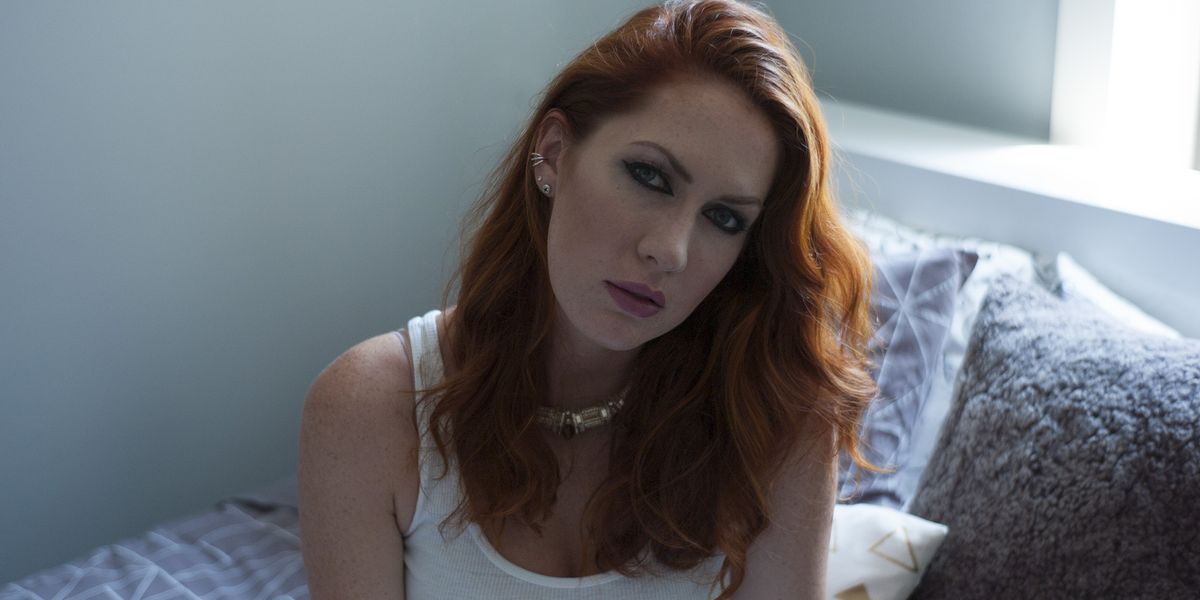 Valissa Yoe wears several hats—even though she has great hair! — including being a fab makeup artist (who has painted me spoofing various scandal stars) and a rocking DJ at all sorts of clubs and parties. Her clients have included MTV, Google, Bloomingdale's, Topshop and Nike, to name a few. I caught up with Valissa to get her take on multidisciplinary aesthetics.

I love them both. As an artist, if I could only do one of them, I'd be bored to death.

Tell me about your early background.

I was born outside Chicago. When I was three, my dad became creative director for Jim Henson, so we moved to Westchester. He created one of the characters in that show Dinosaurs and he worked on Fraggle Rock and Labyrinth. We don't speak anymore.

He's a creative genius and it's difficult to reach him if you live outside his own head. But I love him.

What were your personal aspirations growing up?

I started my own clothing line when I was 14 and sold it at Yellow Rat Bastard. I started this collection called SHY, a line of reworked denim and vintage tees. I was an art major in high school and did a lot of oil painting and sculpture and photography. When Jim Henson died, my mom and dad decided to start their own creative agency. They ran that for a decade. They worked for Disney, MTV, and Mattel toys—they did anything Barbie. So I was raised around entrepreneurs. There was a full-on business being run in our house. They were workaholics—a creative genius father and my mother was the one who was good with clients in business and kept my dad together.

I studied at FIT, fashion design. I took stylist courses. I teach seminars now for their styling courses. I started doing test shoots while I was in college. When I turned 21, I moved to the city and I got submerged in the electronic house music scene and lived in Brooklyn. My ex-boyfriend was throwing parties at one of the first clubs there, Studio B. I was enthralled with that world. Music was already part of my life—my mother is a big blues fanatic and she opened a blues club in Woodstock with her boyfriend. Someone gave me an opportunity seven years ago and taught me how to DJ, and I took it and ran with it.

What's your approach to DJing? Do you have a pre-planned set list or do you take requests?

I like mixing old and new—with old house and disco. My new thing is telling them I've never heard of Britney when they ask for her.

They still ask for Britney?

They do. It's mostly the vanilla girls from Westchester. I got a lot of those on Pride.

What's the weirdest thing people ask you to play?

I guess Ariana Grande, but I don't know who she is.

She's sort of the new Britney. No, she's more like the new Mariah. And how did the makeup career come about?

I was styling an ad for the roast of Donald Trump on Comedy Central. I know, "Why? How? Why?" We were doing a reshoot on a helicopter scene with this actress playing Trump's sexy Russian secretary. I had styled her, and the producer said, "Hey, we're gonna do a reshoot. We already have the clothes. You want to do hair and makeup too?" I said, "Sure." I already had a love of makeup.

Do you love the really over the top makeup assignments?

The thing I love most about makeup is the people study and the interaction. They sit in their chair and you almost step in as a therapist. You get to be close and intimate for a person, even for a short amount of time, and they feel like they can tell you anything. I love making people happy and bringing out the best in them in the little time we have on set together.

A Rogaine commercial. I had to draw pubic hairs and an ass crack in a scene where it was going to be blurred. I also did Big Ang's makeup right before she passed. She gave me a lip gloss from her hair salon. I loved her. It was for Out magazine—four gay men, at two in the afternoon, at her bar, the Drunken Monkey. There were all these construction workers shit-faced drunk, and I was a little scared for our lives in the middle of Staten Island, but I made it through.

Would you ever go back to fashion?

No, I'm actually not styling anymore. I got stressed out. It's not worth it for me.

What's exciting to you about New York's culture and people?

I love New York. I can go out and walk around the streets and get hugs for days. People are full of life and love and creative energy. There's endless opportunity here to be whoever you want to be and do whatever you want to do. I've been taking full advantage of that.

Would you say you're self-created?

I don't think there's such a thing. You take influences from all the people and your surroundings. I'm surrounded by beautiful creative energy all the time.

Are you at all spiritual?

I'm very spiritual, and my mother has always been big on manifesting everything you want in your life, so I've been meditating a lot in recent years and able to get anything I set my mind to.

I'm trying to find love and romance in New York right now, and a creative equal. I want to travel and DJ as much as possible.

Would you say you're bi? Straight?

Straight. I know-- I'm so boring. I've always had an attraction to women, but only occasionally acted on it.

But you're not bi?

I don't know. There are so many new names. I don't even know all the names and terms of things you can be these days.

So you're actively looking for a boyfriend?

Yeah, I'm in Central Park lurking around, and I'm on Instagram…

You'll probably do better in Central Park. Is there hope for America today?

I'm trying to stay positive. We can all do our part in trying to live a good life and try to think positive, spread love and be an activist. Trump has definitely got us all riled up and maybe now we'll be active in voting and making more decisions about our future.