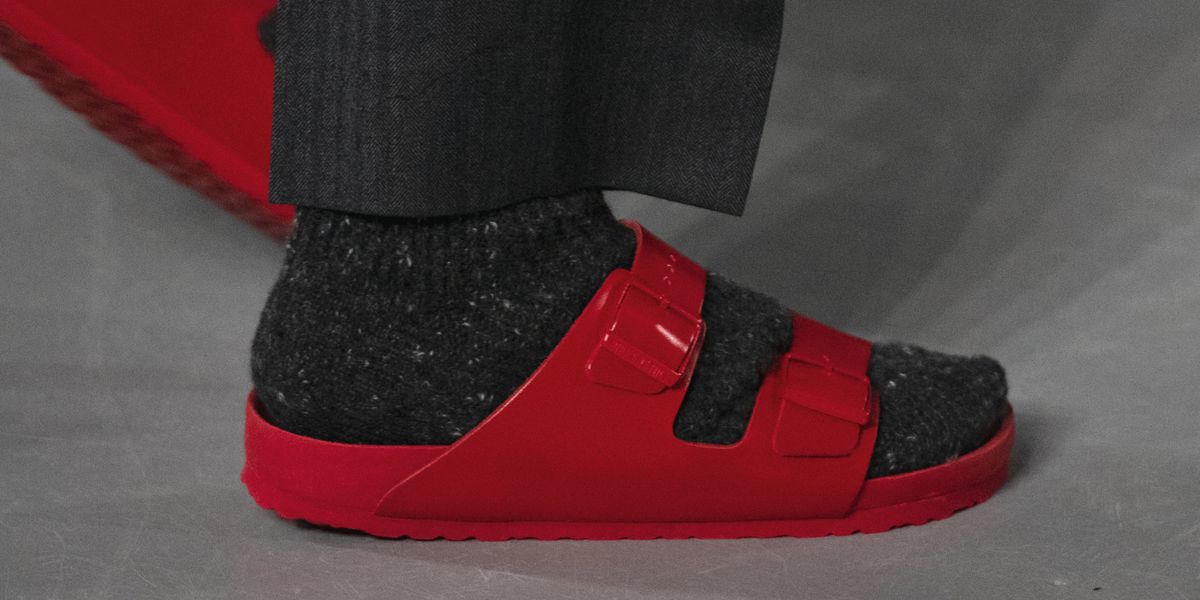 These days, it's always a toss-up who's more likely to step out in the latest trends: a downtown club kid or your Prius-driving English teacher dad. From track pants and oversized windbreakers, to high-waisted chinos and orthopedic sneaks, to glasses straps, crocs and fedoras, over the course of 2018, the menswear gods became increasingly interested in styling men like they're a few years out from retirement, headed out to mow the lawn. As the New York Times points out, these basic, anonymous pieces have become designers' choice of rebellion against the routine sex appeal, hyper-exposure and brand-centric nature of our Instagram-first fashion culture.

This obsession doesn't show any signs of slowing down in 2019. Last night at their fall 2019 runway show in Paris, Valentino debuted a new collaboration with Birkenstock, offering two versions of the classic Arizona chunky sandals in their signature Valentino red and a logo-splashed black.

Creative Director Pierpaolo Piccioli, who spearheaded the collaboration between the Italian fashion house and legendary German footwear brand, sent men down the runway looking comfy as hell in socks and sandals paired with tailored slacks, graphic-emblazoned pea coats, and trenches.

"I chose to make this collaboration with Birkenstock for the same reason people choose Birkenstock every day. No matter what you wear, who you are, no matter your gender or social background, no matter your age, your style, no matter if you care about fashion or if you do not, Birkenstock has its own universal language" says Piccioli in a press release. "I loved the idea of approaching the DNA of our Maison, represented by the individual and intimate world of Couture with something that it is so free and adaptable. To me, this is the definition of inclusivity."

Related | Are Dr. Scholls the Next Ugly-Chic Shoe Trend?

Given our Dad-fashion and minimalist-chunky shoe manias, it makes sense that Valentino is just the latest giant to jump on a collab with Birkenstock. Rick Owens and Opening Ceremony debuted Birkenstock collabs last year. Opening Ceremony offered glittery clogs and slides while Owens' initial collab included calf-hair covered sandals, which he followed up with a "brutalist" black and white sandal and a Rotterdamn boot. His interest in the brand, he told Hypebae, comes the appeals of comfort, and "living a healthy, natural life. "When I think of Birkenstock, I think of that kind of innocence" he explained.

Before Owens, French retailer Colette dropped a Birkenstock line in the summer of 2017, black sandals splashed with Colette-blue dots. And before Colette, according to The Cut, which recently took a deep dive into the making and recent revival of Birkenstocks, Phoebe Philo of Celiné put a mink-lined Arizona "Furkenstock" on the runway in Paris in the Fall of 2012. In the 90's Marc Jacob's recently revived grunge collection for Perry Ellis also featured the Birkenstock.

Birkenstock is actually so hot right now, that they can be extremely picky about who they let use their iconic model. We recently learned via The Cut's report, that Birkenstock turned down projects with both Vetements and Supreme because these brands insisted on putting their logos on the sandals. This is an almost comedic power play by the brand, given that Birkenstock x Supreme, like the streetwear giant's work with Vans, Nike, Levi's and North Face, almost certainly would've become a rabid millennial obsession. "There's no benefit for us except prostitution," CEO Oliver Reichert. "Because this is just prostitution."

They must have deemed Valentino's "VLTN" logo acceptable, however, because that it's slapped across the side of the black edition of their new collab. Check out the latest step on Birkenstock's high fashion journey: