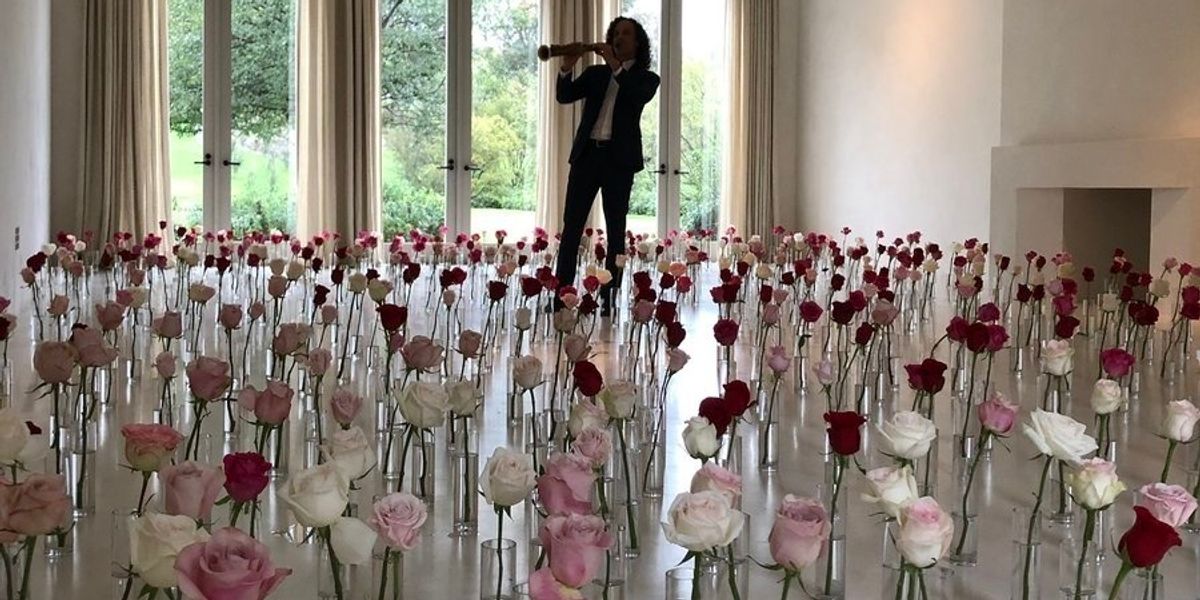 10 Celebrities Who Did the Most for Valentine's Day

February 14 sure is a great day to be hot, famous, and in love — ideally with someone who is also hot and famous. Also, rich! Nowhere is this more clear than on Instagram right now, with celebrities are gathering in full force to celebrate their relationships.

Some celebs went subtle today, while others went performative. Miley Cyrus is excited to have sex with her new husband Liam Hemsworth, Lily Reinhart and Cole Sprouse are as tangled up in their Riverdale romance as ever, and Kanye West literally hired Kenny G to perform for Kim Kardashian, trapping him in an aesthetic prison of roses in chic glass vases. Kylie and Travis also stuck to an expensive floral theme.

Our favorite famous declarations of love, below.

Memey saxophonist Kenny G received what I hope was a hefty paycheck from Kanye West to serenade Kim, surrounded by roses. It would be great to get some more info on the logistics: did Kenny enter an empty loungeroom and wait around with his sax while interns slowly imprisoned him? Or did he tip toe Mission Impossible-style around each obstacle until reaching the center? Either way, it's an impressive social media stunt from a couple known for their impressive social media stunts.

Hailey Rhode Bieber on Instagram: “I get to be his valentine forevaaa evaaa???? 😻😻”

Vogue cover stars and young Christians of note Hailey and Justin Bieber were hardly going to sleep on a day dedicated to love and commitment. Thanks to Hailey we got this classic black and white smooch pic, plus yet another reference to the fact they're husband and wife.

The possibly engaged Kylie and Travis recently celebrated Stormi's first birthday with a festival-style pop up experience that included a giant balloon in the shape of their daughter's head. So actually this tunnel of roses is kind of low key for them.

Jonathan Van Ness on Instagram: “Valentine’s Day = Triggered Central. You too? Here’s what I think. We are taught so much to find value in everything outside ourselves.…”

Who else but Queer Eye's Jonathan Van Ness to make a bit of Valentine's Day cynicism look cute? A nice reminder that today is a construct, even if you're Kim Kardashian and your husband is Kanye West.

Cole Sprouse on Instagram: “Quite actually the only thing keeping me sane is @lilireinhart”

Betty and Jughead are so powerful! They're the joint CEOs of Netflix at this point. Both Cole and Lili posted sweet messages about each other today, and Cole took that photo of Lili himself!

laverne cox on Instagram: “We Cultivate Love When We Allow Our Most Vulnerable And Powerful Selves To Be Deeply Seen And Known, And When We Honour The Spiritual…”

More Valentine's Day realness courtesy of Laverne Cox! Be honest with someone and open your heart today, even if it's just your Seamless delivery guy.

You can just tell they're at some Illuminati beach resort, but Gwyneth's sun-kissed half smile is still cute and oddly soothing to look at. She and Brad got married last year — they hired a celebrated war photographer to shoot the chic upstate New York wedding!

Minimalist caption, unsmiling selfie! These two should try harder, right? Jk. They're coming up on the one-year anniversary of their City Hall wedding, hence the caption. Read PAPER's cover story with Emrata here.

Currently single? Here's your new boyfriend! Thanks to Philadelphia Flyers mascot Gritty for adding some much-needed freakiness to the V-Day feed.