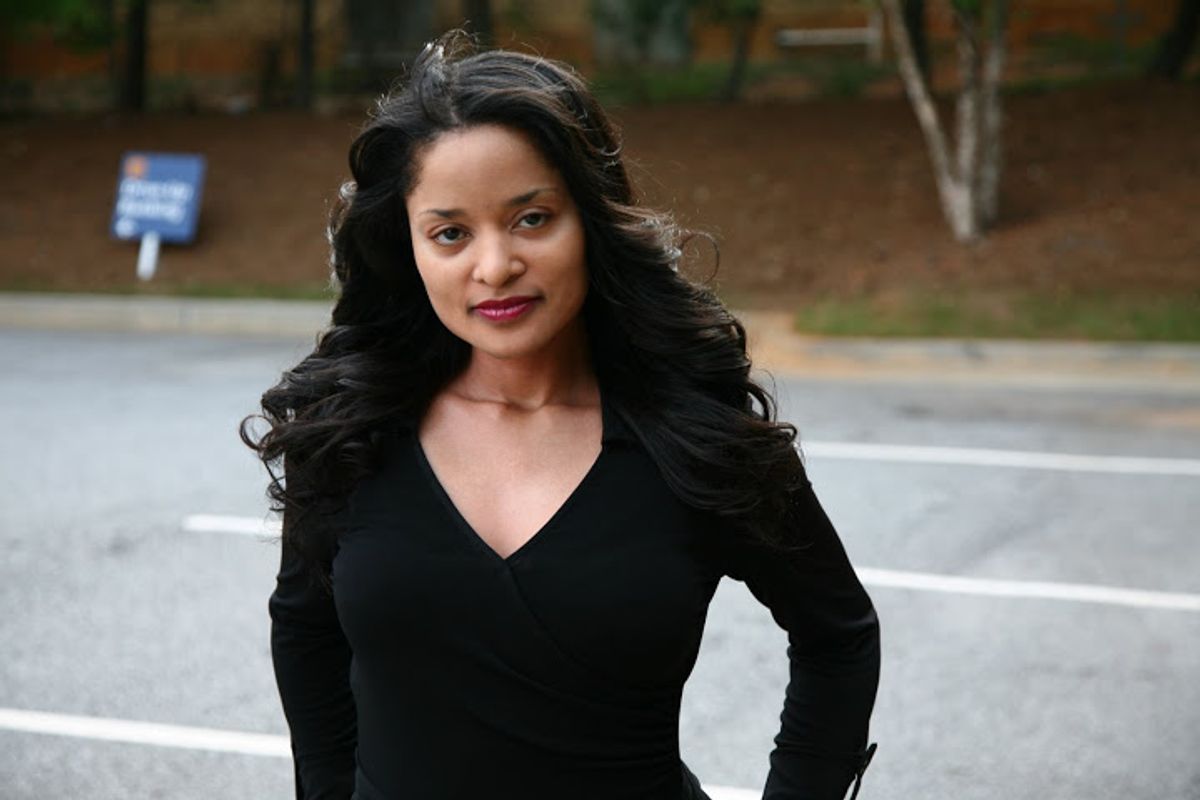 Atlanta-based sex guru Alexyss K. Tylor captured our hearts, hit the walls and worked the middle when clips from her brilliant, outrageous public access TV show Vagina Power went viral all the way back in 2008. The original Vagina Power show, which ran all-too-briefly from 2006 to 2007, was a forum for Tylor's tough-love sex advice, her metaphysical theories on spiritual sexuality, and her hilarious, cathartic rants about trifling men and the "common bitches" that love them. Here is Alexyss sitting across from her mother in front of a blue screen, explaining how women get hooked on good dick and "screwed into slavery" by disrespectful men who wouldn't even buy them a shrimp plate at Long John Silver ("...and that plate's what, $2.99?"). Here is Alexyss in front of a pink CGI tunnel sagely explaining the spiritual power of sperm. Here is Alexyss in salute, wearing a pilot's hat and telling viewers to "pilot your pussy." Here is Alexyss, glamorous and pissed off, puffing on a cigar and commanding her audience to stop falling for lying, cheating half-stepping men ("STOP being a common bitch"). Vagina Power was ceaselessly entertaining, but at its core, the show was an effort to empower, de-stigmatize and glorify the vagina for women like Alexyss, whose repressive upbringing equated female sexuality with sin, vulgarity, and subjugation to men.

The viral buzz may have ebbed away over the years, but Alexyss never stopped. She continued to make videos, write books about chakras and goddess energy, create a line of skincare and haircare products, and resurface periodically in the zeitgeist with appearances on Maury and Tosh.0. In 2012, Alexyss opened up for the first time about her painful childhood in an incredibly intimate and sensitive mini-documentary for Vice. She was born to an abusive mother, who told Alexyss early on that she was a product of rape – Alexyss does not believe this to be true, but this assertion would always be an open wound between them. Her father was the charismatic soul singer, Jackie Wilson, who dated her mother for years but was barred from any involvement in his daughter's upbringing. Tangled loyalties between her abusive mother and her absent father have been a great theme of her life, but since she started singing her father's songs, she has found a new way forward. We sat down for a conversation with Alexyss to talk about the origins of her iconic show, her forthcoming album, and the glorious return of Vagina Power in 2016.

How did you become a sex expert?

Life. I've been through a lot of bad relationships. I grew up in a very dysfunctional family, and I was abused as a child – my mother resented my father, so she took it out on me. As a result, I didn't really have the childhood or the girlhood, to develop smoothly into womanhood, dating, love and sex. I was in an adult body with a wounded little girl mind, and I had to kind of feel my way through life alone. I attracted a lot of the wrong men. Instead of being bitter, and miserable and angry [about those bad experiences], I chose to learn from them, consider them, and analyze them. I ultimately decided to share [my struggles and insights] with other women, to see if they could learn from them too, and avoid all my pitfalls.

Have you always been able to speak so freely about sex?

No. My mother was a preacher, so for her everything was about religion, and everything about a woman was shame. Shame around Eve, that she bore the guilt of the world. In the Southern Baptist Church, the men come first, and the woman are just kind of there to support them – you're not as important to God as the man. [In that context,] it's OK to abuse and degrade women, and use religion and spiritualism to justify it. It took a lot of courage for me to get on TV and say 'Vagina power!' There were people that said, "Don't you dare say that." Women were saying it. And I said, wow, you've got a problem with your vagina? Like, you can't even say [the word]? I met women from all walks of life who really didn't believe that their vagina was powerful, and that it was vulgar for me to say.

Pain. I was continuously finding the same men that just wanted me to be seen, not heard, and do what they said. Down south, I was taught that you let a man pick you, and if that man approves of you or drops you, it's something that YOU did. Women actually get ridiculed because a man walks away and leaves them. It was in that pain that I realized, wow, my vagina can be used as a weapon against this. I have the power! Because my vagina has always been a negotiating tool. It was just the anger of always losing at love and feeling that it was my fault. Even in that fear, I decided to speak out [and start the Vagina Power show.] And I was surprised by how many men and women said, "YEESSS!!"

Can you tell me about your decision to have your mother on the show considering your troubled history?

When you deal with religious and Christian circles, they're going to always encourage you to forgive, no matter how abusive your parents are. You're taught to view your mother as God, even if she's the devil. You're supposed to always forgive, turn the other cheek, and if she turns around and knocks the hell out of you, you're still supposed to be the willing vessel. You never speak badly of her and you honor her, no matter what she's doing to you.

I tried to forgive her, and I tried to open up the forum [by having her on the show], but I had to realize that forgiving does not mean [forgetting]. It just got to a point that it was unbearable, because she wasn't willing to change. I had to realize it doesn't matter what we want our parents to be. Sometimes, no matter how painful it is, even in that dysfunction [our parents] may be what we need them to be. Not because they're going to end up being good parents one day, but maybe that [prepares you] for who you need to become in the future.

Looking at my mother, I became strong. When I encounter hecklers and haters, I look back and, think "Oh my god, my mother did the same thing." But I survived that. If I can overcome that, I can take this or that particular criticism. I have to find a positive spin on it.

Your theories of "vagina power" and "penis power" were a cornerstone of your show - can you explain them?

I teach spiritual sexuality. I teach that before you have a physical form, you were first a light being, a spiritual being, that took on a body once your parents had sex. You're having a third-dimensional experience in a physical body, and a spiritual experience at the same time. We have chakras, and auric fields, so to avoid cluttering up your aura with a lot of dirty or negative experiences, you first have to realize that you are a very powerful God force, put on this earth to bring forth knowledge and love. It's not based on a religion or judgment, and your sexual preference doesn't matter. You have to love and respect your [earthly body], and make sure that you choose sexual experiences with people that love you, respect you and honor your temple as sacred. If we pursue those spiritual sexual experiences instead of just having a sexual experiences based on lust, we will avoid a lot of pain.

Your persona on Vagina Power is so direct - so real, funny and entertaining. I think it might surprise people to know how many metaphysical and spiritual beliefs underlie your show if they only knew you from those clips that went viral.

I kind of regret that, because [some] people that watched the show brushed me off. "Oh, she's crazy, she's ignorant, she can't even speak English correctly." I did that on purpose, because I grew up in the Atlanta projects with my grandmother. I knew that audience was very intuitive and spiritual, but they didn't know that they were, so if I came at them with "metaphysics" and "auric fields" I would lose them. For Vagina Power, I wanted to add the entertainment and the comedy, and then slide the education in where I knew they'd be able to receive it. It worked, but I had a lot of intellectual people, who thought, "Oh God, she's so ignorant and she just needs to stop this." Now people are starting to see my depth. They listen to me, and they read my books, and my posts on Facebook, and now that they've seen the music side, people have actually offered me apologies.

Let's talk about your music. You've recently recorded one of your father's songs, 'St. Theresa of the Roses.' You have an incredible voice!

Thank you! If you listen to my father sing 'St. Theresa,' and you listen to me sing it, you'll hear that I have my father's tone and vibrato. It's an honor because my mother always put me down, because she was angry at my father. I had all of that guilt trying to choose between my mother and my father, so I'm finally embracing [him] and the gift that he gave me. I'm actually doing my first live show in Atlanta this year.

It's like I'm being born again, into another phase of myself and my life that I didn't know before. That song, 'St. Theresa of the Roses' has a spiritual significance for me. She is a saint that people go to for help and healing and protection. I have her pendant on. I didn't realize that I would go through different trials and tribulations when I made that song, and it eased my burden to know about her. When I'm talking to her I feel like I'm talking to my father at the same time.

So what's next for the one and only Alexyss K. Tylor?

I'm working on an album for my dad, which will come out this fall. I'm going to be doing new episodes of Vagina Power on the Internet this year, which will incorporate my music. And girl, I didn't tell you! I'm working on a sci-fi sex series, and in it I'm a kick ass warrior.