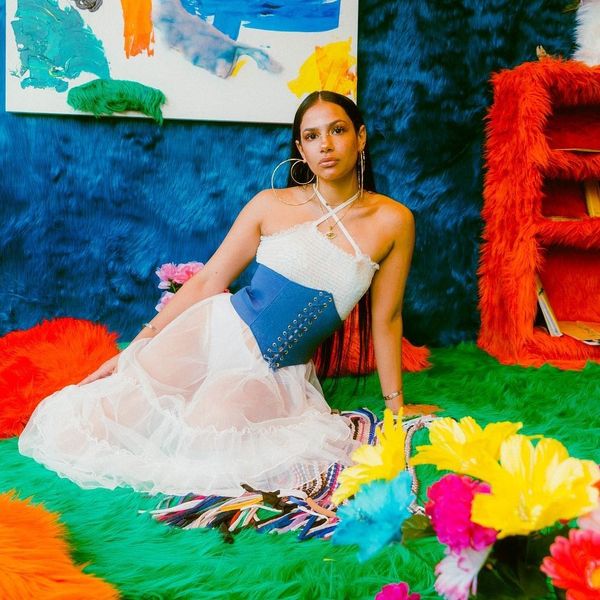 by Jasmin Hernandez
Paper Magazine
10 May 2019

Los Angeles-based textile artist Uzumaki Cepeda has been grinding hard. So hard that Instagram took notice and came by her DTLA loft to photograph and feature her on their Instagram. So hard that a creative at Instagram decided Uzumaki should create her signature fuzzy, dream-like installations on site at their HQ in Menlo Park. "I was just like oh shit. We basically coordinated where my stuff is there and I'm going to reinstall for Pride," Cepeda explains. Her untitled installation at Instagram's offices opened on April 1, and it's a playful, cozy, think tank covered in soft purple and magenta fur with hanging plants. On June 1, Cepeda will transform that current installation project into a Pride-themed celebratory room.

Cepeda is a textile artist known for her blazingly loud color palette of bodegas, fresh acrylic nails, and the Caribbean colors of the Dominican Republic, where her family hails from. Born Julianna Cepeda, the artist borrowed the moniker Uzumaki from the Japanese manga horror series. Her signature medium is faux fur, which saturates her work with a soft surreal touch, but why fur? "It kind of brings art and fashion together in a weird way," Cepeda shares. "It's also nostalgic. It's one of those things that it doesn't age like a painting. It's something that's always going to stay tactile and it invites people to touch it. Anytime you touch it, it'll never look the same twice."

As an Afro-Latinx artist, Cepeda designs spaces for bodies of color — bodies like mine — and consistently places Black and Brown women front and center in her work. Cepeda grew up in a Latinx household in the Bronx, and understood the duality of her identity as a first-generation, Dominican-American, living in New York and surrounded by Dominican culture, "that we saw the Caribbean through this loud color palette, and the music. Like our culture is still here. That's how I felt, I felt like I was in a little DR kind of."

Cepeda and her two brothers were raised by their single mom, between the Bronx and Lawrence, Massachusetts, her father had been deported when she was one. Oftentimes old-school Latinx parents can't envision a creative career for their children. It's a feeling many first-generation Latinx kids encounter, convincing your parents you could live off your blog, your writing, your photography, or your art.

Cepeda reveals, "Being Dominican-American, I was privileged in the sense where I didn't have to go through the struggles my mom did growing up in a third-world country. I grew up hella privileged, even though kind of disadvantaged of course, but more privileged than my mom, so I have a better sense of how things move out here. Me being artist was very abstract. How are you going to make money? How are you going to live? I feel like America is a different space where you could go somewhere, it could happen for you."

Cepeda has found a way to thrive on her own terms. Her big break came in November 2016, when A$AP Rocky curated a pop-up store for his underground collective and released the Koraju app at the inaugural ComplexCon, and invited Cepeda to create a fuzzy, playful installation of primary colors. The soon-to-be 24-year-old artist has appeared in a steady stream of high-profile campaigns including; Champion, Nike (both the classic Cortez shoe and the debut ACG women's collection in 2017), modeling alongside Kyle MacLachlan and Kim Gordon in UGG's Fall 2017 campaign, and prop styling for UGG's Holiday 2017 collection too. In November 2018, Cepeda returned to ComplexCon, but solo this time, "It was just more of like a play space where people could do whatever they wanted. There were no boundaries. There were no rules."

In September 2018, Cepeda was among the artists tapped to create one of the selfie-friendly spaces for Refinery29's 29 Rooms experience in Brooklyn. Her "Teen Bedroom" installation featured a wild mix of 80s and 90s pop culture references including a David LaChapelle photograph of Lil' Kim in blonde pigtails, a working Nintendo 64 furry console, and a "Back to the Future" movie poster. Visitors frolicked around on a bright red bed, peeked inside an electric blue closet, primped in front of a yellow vanity set, and talked on a nostalgic hamburger phone.

A month later, she made her museum debut at the Craft & Folk Art Museum in Los Angeles with "Daydreaming," a "furred out" living room installation that showcases her New York and Dominican roots. "It was definitely influenced by that, because Dominicans, we're always gathering in a living room, so I definitely did my version, because I feel like I spent a lot of my childhood in a living room. It definitely resonates with me." In December 2018, for the L.A. version of 29 Rooms, she recreated "Teen Bedroom", a similar bedroom swagged out with bright soft fur. "The art itself wasn't too different, but the feeling was different because obviously I feel like New York is more…they show mad love to me."

Cepeda is navigating success and visibility completely solo, with no gallery, agent, or manager. She's real about her struggles, as a young WOC, independent artist, managing finances and opportunities. "Honestly, I'm going through that crisis right now, where there's no agency that manages young artists. So it's really hard juggling in between reading a contract, debating with these people, and then getting to the art. By the time you get to the art you're like fucking exhausted. So I've definitely been going through this phase where it's getting really, really tough on my own. I'm figuring out a way if I can find people to help me. There are no fucking organizations to like help young artists, to be like hey here's a PR, here's a manager, we'll be talking the contract while you do the art."

The native Bronxite turned Los Angeles transplant, likes that there are many opportunities here in her adoptive city, but feels like "more Black and Brown folks need to be chosen. They need to be given the platform, sometimes it's like 'you're giving out opportunities' but what's up with us?" On missing New York, "I miss the culture. I miss being around Dominican people, to be honest." Cepeda is a smart, savvy, and singular artist, a creative individual we've never seen the likes of. Are you ready for her?