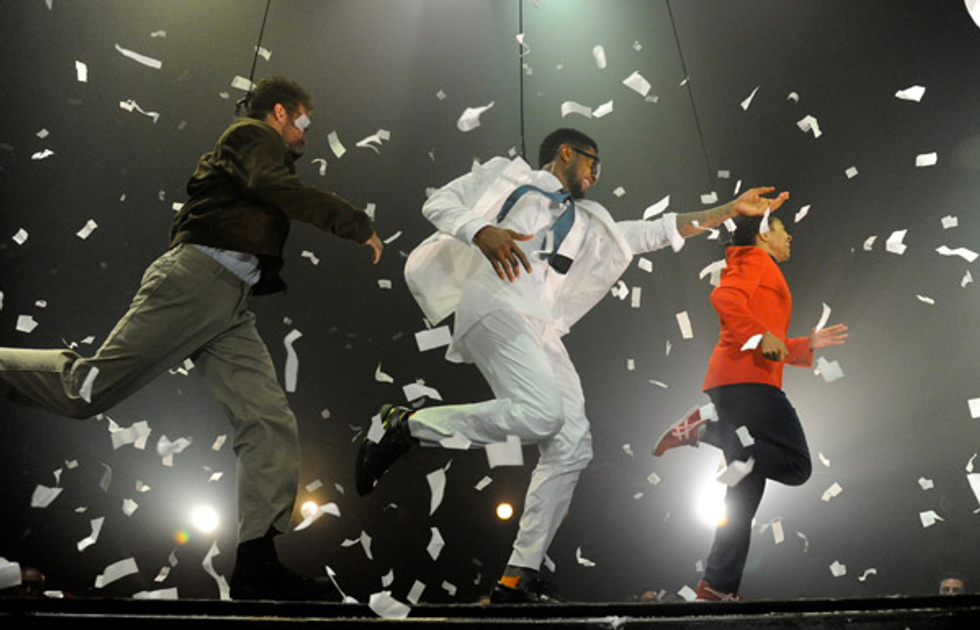 A few weeks ago, we reported that Usher would be joining the cast of the experimental, multi-sensory show, Fuerza Bruta, for two performances this past Saturday, April 28th. When PAPERMAG got an invitation to attend a listening session for the singer's forthcoming album, "Looking For Myself," it made sense that the event would be held in the same theater as Fuerza Bruta -- The Daryl Roth Theatre -- since the Pop/R&B star would be busy getting ready for his debut.  What we didn't realize at the time, however, was that during the listening session, we'd be treated to the show itself.

Rather than most listening sessions, which involve media types milling around, imbibing from the open bar and half-listening to the album/half-schmoozing with colleagues, this experience captured everyone's attention from the moment Usher burst out on a treadmill, clad in white, to the sounds of his Diplo-produced single, "Climax."  While in the Running Man role, the singer participated in whimsical scenes with the rest of the Fuerza Bruta cast, including a dream sequence set to "Lemme See" (his track with Rick Ross) in which two cast members aerially scaled what looked to be massive space blanket curtains. Confetti snowstorms and rainfall -- which startled many a primped writer and publicist -- added to the overall effect.


Perhaps, however, one of the biggest highlights during the hour-plus experience was one that did not involve the singer: Fuerza Bruta's signature water act. During this part of the show, a huge transparent plexiglass pool descended from the ceiling, partially filled with water, containing performers who slid and writhed around, creating spectacular shapes with their bodies. The pool continued to lower until it hovered a few inches above the audience  and everyone could reach up and touch the structure. While "Hot Thing" (ft. Pharrell Williams) and "I Care 4 You" played, the actors, separated from the enchanted crowd by only a thin layer of plexiglass, made faces and pressed their palms against the glass before splashing away.  This moment, not unlike the rest of the show, served as a good reminder to any jaded New Yorkers in the audience that Fuerza Bruta, which has been running since 2007, is not just another stop on a tourist's to-do list but a completely breath-taking production.

After the listening session finished with "Can't Stop Won't Stop," crowds milled about to greet the singer and -- how did we miss this? -- one such fan was Usher's protÃ©gÃ©e himself, Justin Bieber (and apparently they even had a dance-off!).  While it's still unclear how Usher got connected to Fuerza Bruta in the first place, what is clear is that the collaboration created a unique listening experience and the theatrics seemed well-matched to his new album.

See the full tracklist from "Looking For Myself," which comes out on June 12 via RCA, below: