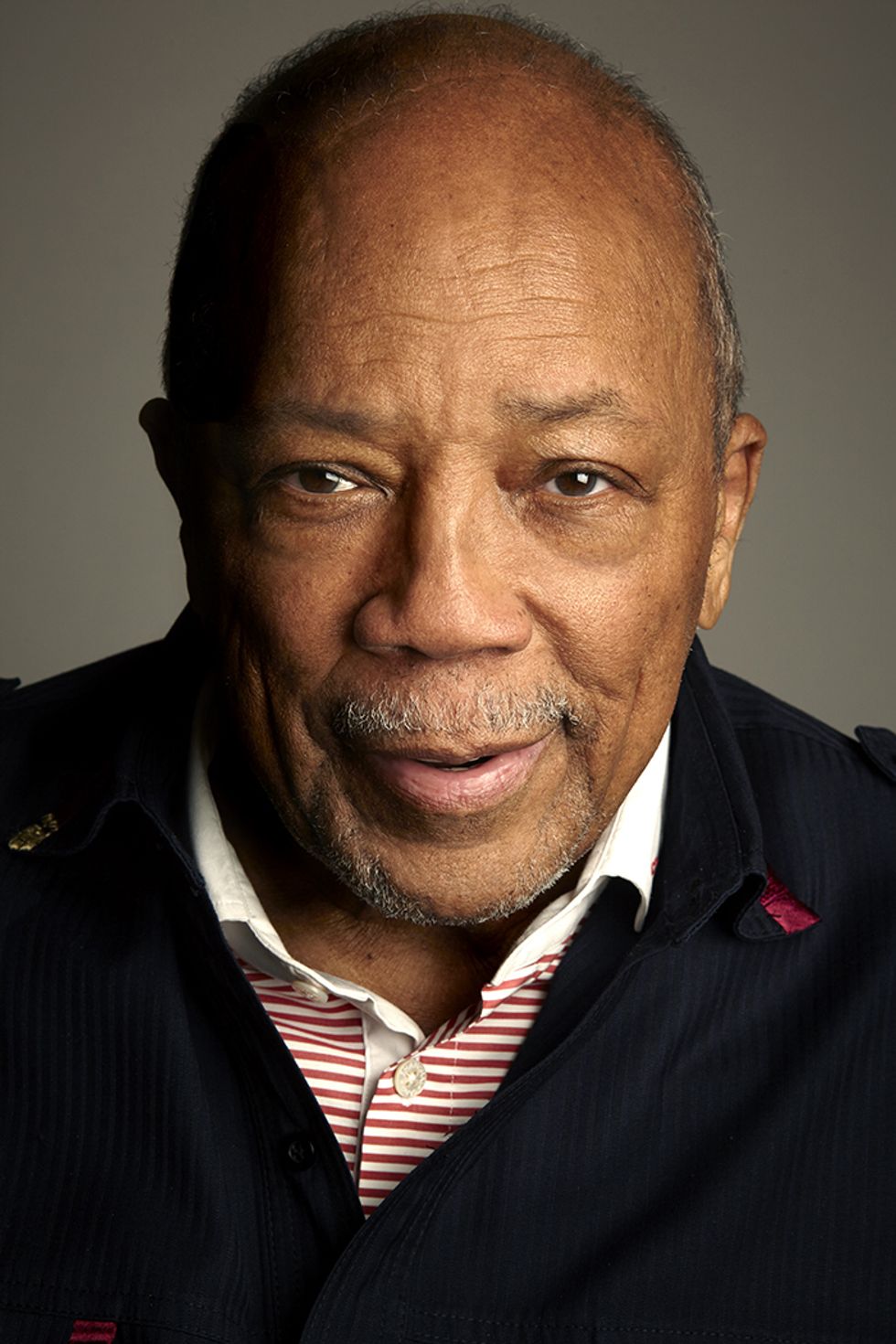 Use Your Voice: Quincy Jones

by PAPER / Photography by Albert Sanchez
PAPERMAG
Nine living legends of music, the causes they believe in and the worlds they envision. Welcome to PAPER's Use Your Voice portfolio. Get ready to get inspired.
It would be easy to hang your philanthropic hat on an achievement like "We Are the World," but mega-producer Quincy Jones hasn't stopped fighting for global human rights since that song flashed across the globe 30 years ago.

What cause do you care about the most right now, and did you first connect with it?

From child poverty and human rights, to music piracy and arts education, and a host of others, there are so many things that are going on in the world today that I think about, and require our attention as human beings on this planet.  I grew up in depression-era Chicago in my pre-teen years, so I know first-hand what if feels like to be disenfranchised, on every level.  When I first went to the Middle East in 1955 as musical director and trumpet player for Dizzy's first State Department Tour, I remember seeing a little girl with one arm, begging for money.  We gave her some of the money we had and as we walked away, I saw her duck into an alley.  I asked our guide what that was all about, and he told me that she was taking the money to her uncles in the alley. They had chopped her arm off, so that she would be more sympathetic begging for money. I had seen a lot as a kid in Chicago, but as a 22-year-old man that left an indelible imprint on me, the sheer inhumanity of it.  I knew at that moment that if given the opportunity, I would use my music to help shine a light on the darkness.

When I was in Paris studying music with the great composer and teacher Nadia Boulanger, she told me that "Your music can never be more than you are as a human being." As artists, we are all just vessels for God's whispers. I believe that if your heart and soul aren't in the right place, those whispers become much harder to hear.

The list is too long. When I was coming up as a teenager playing music in Seattle, we didn't have role models in America like we do today. There were no Oprah's, Will Smith's or LeBron James', and definitely no Barack Obamas. Our role models were the musicians. I was really fortunate that cats like Clark Terry, Lionel Hampton, Bumps Blackwell, Ray Charles -- who was 17 at the time and remained one of my best friends until the day he left us, Benny Carter, and a host of others, put me on their shoulders and taught me and encouraged me. When we were coming up in the 50's as young be-boppers, we had no choice but to stand together, because all we had was each other. We were all part of one family, relying on one another for gigs to get through those all too familiar rough patches. So that foundation of community is a big part of why I try to stay engaged on so many issues. It's a part of who I am.

I don't look at the problems that we have as challenges. I look at them as puzzles, and puzzles can be solved. You just have to be willing to look at it from all angles and then approach it from a point of view of putting the right pieces in the right places.

Never. As my brother Bono says, 'you have to use your celebrity as a currency to do good works." As artists, we have a unique opportunity to speak out about things that truly matter.  If your celebrity helps to open a door to shine a light on an issue, that is its purpose. In in 1999 Bono, Bob Geldof and I met with Pope John Paul II as a part of the Jubilee 2000 delegation to enlist his endorsement to end third world debt. The next day, with the Pope's endorsement, $27 billion in debt was relieved for third world countries. That was an enormous fiscal burden lifted off of those countries, and was money that they would presumably direct to helping their people have better lives. Our meeting with the Pontiff, garnered attention for the issue and effected an immediate action, and that is what it is all about.

There will always be some people who are so out of touch that nothing you can say or do will change their attitudes. But you can't worry about that. When we did "We Are The World," there were negative people who took shots at us, but we raised $60 million to feed the hungry in Ethiopia, and prodded the U.S. government to spend $800 million more, so there you go. I believe that as long as you are on the side of righteousness and love for humanity, you will always be ok. Love, laugh, live and give... that is my mantra.

I think it is every person's obligation to be involved and try to give back, not just celebrities.  As artists, we have a larger voice to spread the message, but we're all in this together. Can you imagine how much change we could effect if every person who was able to mentored a kid, donated their time at a counseling center, took a little time to do anything to make a little difference in the life of someone who was less fortunate? It would be incredible. Not one person on this planet who has achieved a degree of success in their life did it alone.  Someone, somewhere helped them, encouraged them, gave them a shot. I know everyone is busy, I'm busy, but I know we all benefit as a society if we're aware of and engaged in what is going on in the world, and try to make it a better place. I don't think it is that much to ask, to give back as much as you have been given.

You have to go, to know. When we did "We Are The World," the first plane load of food sat in the desert and spoiled, because the warring factions in the region basically said, "if they want it, let them come get it," which the people obviously couldn't do. Bono and I pledged from that moment that we would really get into the weeds of issues to see how to navigate the obstacles.  I constantly travel all over the world today, and engage with everyone that I can so that I know and understand exactly what's happening on the ground.

Do what you love, and love what you do. If you approach your endeavors from a place of love, and not fear, you will always be ok. We are more alike than we are different, so try to engage people, and ideals, and ideas, from that starting point, we'll all be better off.

There are so many problems that we have in the world today that require our attention.  But I'm a serial optimist.  I know in my heart that if we can come together to address the problems that we have, we can figure out the puzzle. You know the old saying, "shoot for the stars."
For more Q&As from our 'Use Your Voice' portfolio, go HERE.
You May Also Like
Music

Kim, It's Way Too Warm Out for All This Coat

Vans Are Selling Out Thanks to 'Squid Game'