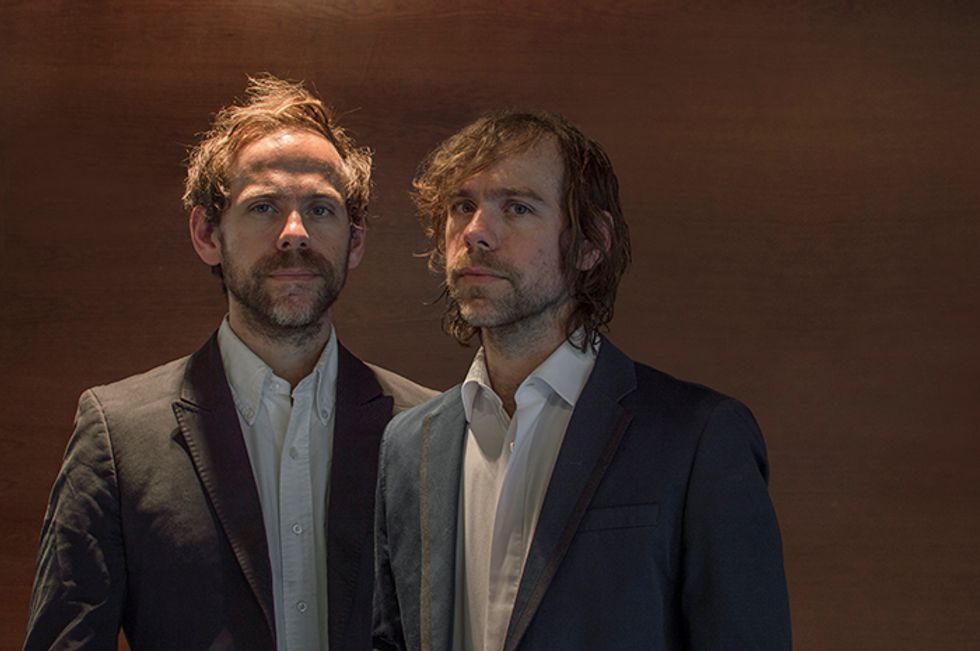 Use Your Voice: Bryce and Aaron Dessner

by PAPER / Photography by Fabrizzio Morales Angulo
PAPERMAG
Nine living legends of music, the causes they believe in and the worlds they envision. Welcome to PAPER's Use Your Voice portfolio. Get ready to get inspired.
Compiled by Bryce and Aaron Dessner of the National, the Dark Was the Night compilation featured pretty much every band that defined American indie in the aughts; it also marked the twentieth release of the Red Hot Organization, which raises funds and awareness for AIDS charities. Look out for another Dessner-helmed Red Hot installment down the road: a similarly zeitgeist-embracing Grateful Dead tribute album.

What cause do you care about the most right now, and how did you first connect with it?

Aaron: It's difficult to narrow a pro-social inclination down to one cause, but I feel passionately that access to quality healthcare should be a human right. I started working for the sister design company to the Red Hot Organization, an AIDS charity, in 1999, and founder John Carlin has been a mentor to me ever since. It was amazing to see these great albums being made that were entirely not for profit and dedicated to raising money and awareness for AIDS charities.

Bryce: Education and health care for children here in the States and in developing countries is a cause we have long been involved in. I first connected with that cause when I was in high school: I spent summers teaching children in a National summer school program in Cincinnati (our hometown) called Summerbridge. Our work now with the Red Hot Organization and AIDS/health-care organizations throughout the world is still focused on providing health care access and education to children. We also donate a dollar or more from every ticket sold to National shows to the Plus One program, which benefits Partners in Health who do incredible work in Haiti and throughout the developing world. I also help raise money for a few Arts non-profits in New York (the Kitchen and the Brooklyn Youth Chorus), which I think is a hugely important cause.

A: I think all five of us in the National are wary of using our songs to preach or expound on a particular political or social perspective, but inevitably the values we have as individuals do find their way into the activity of the band one way or another. And of course there are some songs that have political or social undertones (or overtones). We have embraced the fact that we are fortunate enough to be in a position to raise money and awareness for causes we believe in.

B: In terms of subject matter -- very little, I would say; we've always tried to keep the songs separate from our political or activist agenda. However, we have no problem getting behind a cause that is important. Once the band became popular enough to have a voice that people might listen to, I think we felt it was important to use that when needed.

A: There's such a long history of activism in the arts. I've always associated the music I love with social consciousness whether that's through Woody Guthrie or Pete Seeger or Bob Dylan or John Lennon or Michael Stipe or Patti Smith. In terms of our peers, Arcade Fire are our friends and they have definitely set a strong example with their work with Partners in Health.

B: Michael Stipe and Philip Glass are two artists I know well who we've also been involved with over the years artistically and on various causes. They have such a full-hearted, intuitive and honest approach to activism that was very helpful to be around. I remember Michael holding up the Mr. November T-shirt we had made for Obama on his first campaign in front of 20,000 people in Atlanta and getting booed by his own fans. (We were there opening the 2008 R.E.M. tour).

A: I wouldn't say I'm a celebrity. The biggest challenge is to take a great idea and actually have the stamina and commitment to push it up and over the mountain into reality. We would never have accomplished Dark Was the Night or this new record without the help of many close collaborators and a very supportive community of friends and artists.

B: Our parents generation was so associated with the '60s political unrest and the musicians of that time, that maybe it always felt uncomfortable to us the slightly self-aggrandizing celebrity up on the soapbox so to speak. Its striking a balance between doing projects where we are helpful (raising money and awareness) versus some projects which can be more about the artists involved than the actual causes they are supporting. I still love directly working with children, for instance: I have a years-long collaboration with the Brooklyn Youth Chorus, which I don't see as charity at all because it's a deeply enriching artistic relationship for me.

A: Whatever credibility I have has an artist has only opened doors or encouraged our peers to participate in these projects so I suppose it has helped us along the way.

B: Shortly after we got very involved in the Obama campaign one of the Bush daughters was on CNN and said we were her favorite band. It was was a pretty funny moment! I guess music has no boundaries.

A: If there ever is any backlash (against charity?) or ignorance directed our way, we actually find it absurd and amusing.

B: We have had very little backlash. Sometimes you might read some mean blog comments but that's been the worst of it.

A: I think it's callous and selfish not to try and use the ridiculous currency of celebrity (however minor or major) to do some good for people who are less fortunate.

A: This charity record we are making that celebrates the music of the Grateful Dead includes some of my favorite recordings we have ever made. This is music anyone can appreciate, not just fans of the Dead, and I hope you'll get lost in the music and spread the word for a good cause.

A: The list is too long, but suffice to say I wish we would stop destroying each other and Mother Nature.

For more Q&As from our 'Use Your Voice' portfolio, go HERE.
Learn more about the Red Hot Organization here.