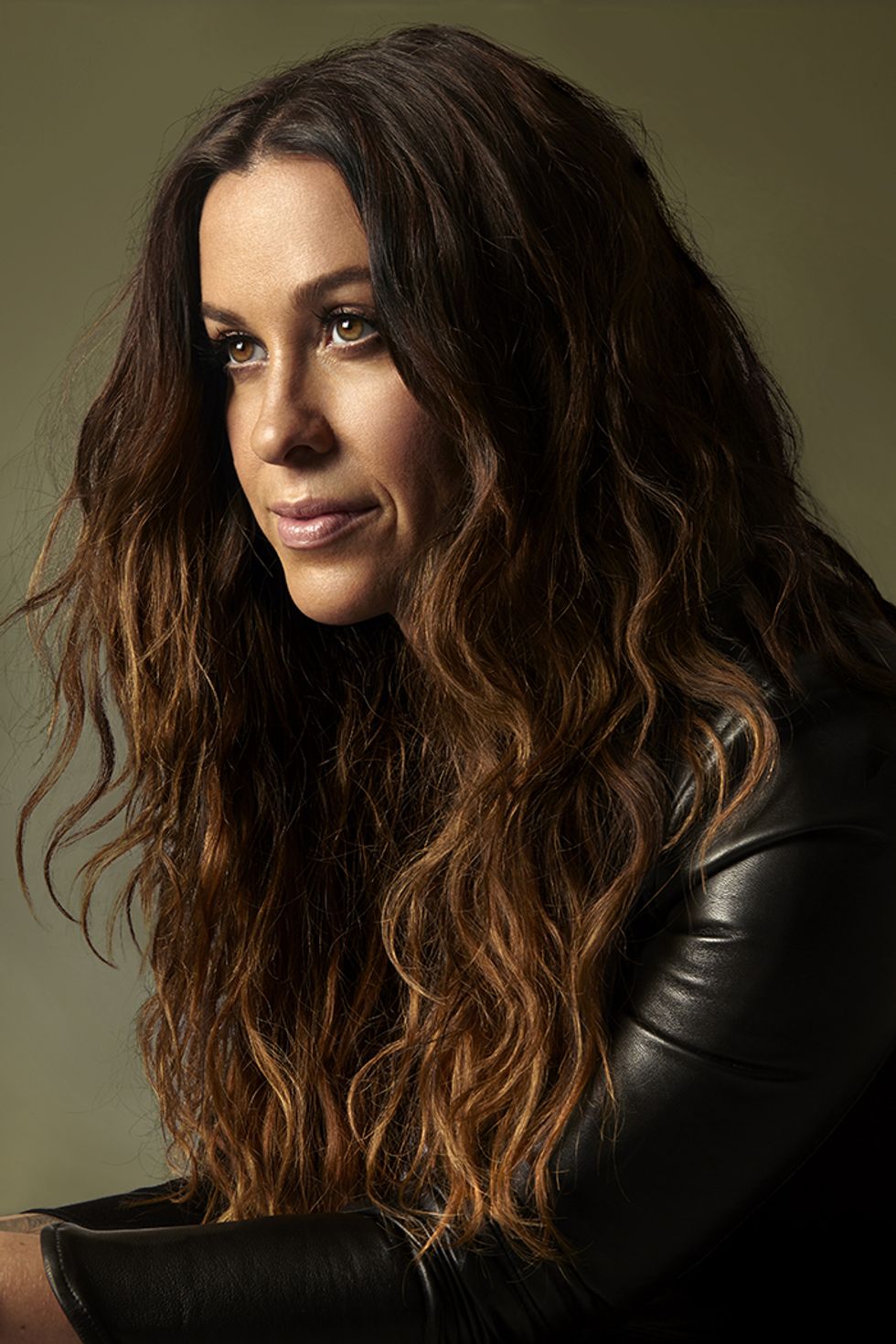 Use Your Voice: Alanis Morissette

by PAPER / Photography by Albert Sanchez
PAPERMAG
(Jacket by La Marque)
Nine living legends of music, the causes they believe in and the worlds they envision. Welcome to PAPER's Use Your Voice portfolio. Get ready to get inspired.
A champion of strong relationships at all levels, as well as women's rights and the crucial activist trait of "showing up," Alanis Morissette works with Relationships First, Equality Now and the National Eating Disorder Association.

What cause do you care about the most right now, and did you first connect with it?

I care most about relationships, of every variety... functionality, boundaries -- all of which allows for a sense of connection and cohesion and ultimately: healing. I co-founded, along with a group of very powerful teachers, leaders and authors, an organization called Relationships First. (john gottman, sue Johnson, harville Hendrix, dan seigel etc).

I care equally as much about women, egalitarianism, and our bodies. I have worked with Equality Now for over 12 years. I reached out to them years ago because I wanted to be part of an organization that reached out to support women on every level around the planet. (Have performed at their events, as well as donated money and tickets to my shows.) My sense is that this is not just a feminist movement, but rather as well a "feminine movement," whose lasting effects could be felt in every area of our lives: from economic egalitarianism, to how we do business, to how we educate, to how we do politics, to how we spend our money, to the consciousness of social culture, the psychological, emotional, spiritual and physical aspects of our day to day, and the fabric of family as well.

In keeping with that, I also passionately support NEDA the national eating disorder association. Having been in recovery from eating disorders for 25 years, this cause is near and dear to my heart and personal journey. My first marathon was done partnering with them.

My art and activism are inextricably linked. The fire that catalyzes the writing of a song equally inspires me to lend my writing, my voice, my shows, my money, my time, my advocacy and my Whole Self for a cause I deeply care about. This passion is the thread of continuity that links every art form I participate in, as well as how I spend my time -- what I read, what I talk about when I am having philosophical conversations with my friends, to what I give keynote talks about.

Both my mother and my Canadian culture taught me from a very young age (age 6 onward) that service was tantamount. She would take us on the weekends to serve food at homeless shelters, and on separate occasions hand out food to families who needed it. I was taught that giving and receiving was a sacred cycle that perpetuates itself (altho receiving is interestingly harder for me, something I watch for my not burning out for "over-giving"). I have never met a more charitable-minded woman than my mother.

The greatest challenge for me is to pace myself and not dip into my work addiction around service. Service feels like such a right-full seat to me, that I have to be careful to keep my cup full enough to keep giving in a sustainable way. It is also important to me to keep my functional boundaries around self-care, as I have often been swept down the slippery slope for not having paced myself. I have loved that what I write about in my songs, and what I show up for in my charity-life are one in the same. There is no split between them. Being a celebrity has been such a boon for this service-tendency. I am able to serve in a potentially further-reaching way for it. and I have noticed that many people who come to my shows have this same tendency, and so I invite people to join me, and they do!

No. I think because my experience of fame was born from my having been searingly honest about my vulnerabilities, there was no disparity between the humility, lack of apology (empowerment) and fire it takes to show up big for a cause.

There have been times where my passion for a project was misinterpreted as my assuming I "knew it all" or that I was "better-than" for being charitable. Especially in politics, my being part Canadian and part American came under fire for my "not being aware of the issues in the way a 'full American' would be." These times saddened me because I have always felt uncomfortable being looked at (irony of all ironies), but it would never stop me from showing up. thoughts like "who am I to do this?" and "why would anyone even listen to me" would haunt me, but still, I would show up. I began caring less about "making a difference" and more about what an existential imperative it was for me to let my charitable choices be a self-and-value-defining moment. When I would find out later that things were at times effective or helpful in different ways, I would always be (and still am) deeply moved.

No, not at all. I think we are all born for different roles, different purposes. I do believe, though, that anyone in the public eye is BY DEFAULT a social activist. Anyone famous is in some ways, unwittingly or otherwise, inviting the audience to define themselves in accordance to them. And this offering, whether consciously chosen or not, is a great gift for a planet of people yearning to define Who they really are, and what they passionately believe in, and what their purpose in being here is. Watching anyone in the public eye (especially around charity or philanthropic work) "doing what they were born to do" invites anyone watching them to move toward the same.

I wish I had known that I was not alone. I felt very isolated when I started this part of the journey. I look around now and I am surrounded by so many activists. At the time I began, I felt this massive pressure to keep rolling the boulders uphill, often without companionship. I also had a different approach when I was younger: I thought that I had to have "arrived" in order to be inspiring to others. I quickly learned that simply sharing my vulnerable and authentic journey and SHOWING UP was all that was being asked of me. to keep showing up. For myself, for my family and friends (on the micro) and to the causes I care deeply about (on the macro). Somewhere in there a well-placed hot bath and a nap and some snuggles keeps the flame alive.

I would like my fans and friends to know that service and charity doesn't have to look ONE way. I believe that in the eyes of life and love, ANY act of generosity is a declaration of the awareness of our soul-brother-and-sisterhood. that often offering someone your presence is the deepest and most generous act of all. And that charitability is born from what moves you the most, and by FULLY showing up for these moments, big, medium and often especially, small. That there is continuity in the choices you make, and that passion for a cause can permeate every aspect of your life, relationships, careers and art.

I would want to see the feminist movement shift to being a "feminine movement." Which would allow us humans and our planet to be touched by an empathy, a powerful vulnerability and transparency. A dialogical, win-win, 1 + 1 = 8 approach. Where personal expansion is possible without losing the care for the collective. That we would all have a direct experience with seeing how our personal and collective well-being rely on each other. How moving toward partnership (a true feminine approach -- not relegated to females only) and away from dictatorialism and "autonomism" is the only way this planet and all of the life on it will continue on.
For more Q&As from our 'Use Your Voice' portfolio, go HERE.

Learn more about Relationships First, Equality Now and the National Eating Disorder Association.
Styling by Sara Paulsen at the Celestine Agency, makeup by Katey Denmo at the Wall Group, hair by John Ruggiero at the Starworks Group