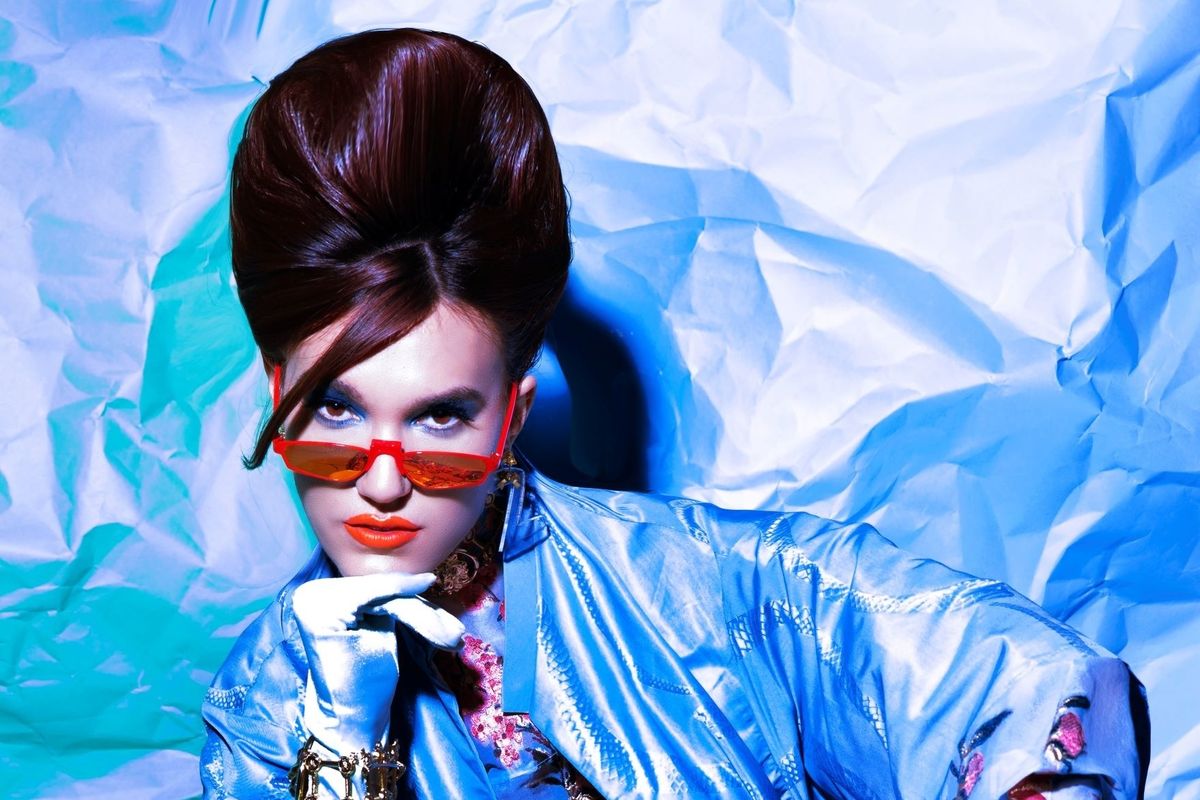 Uppy Is Here to Heal the Internet

How do we take care of ourselves in a digital age?

Our technology dominated lives have radically changed the way we interface with the world and with that comes a whole new host of stresses and challenges placed upon us. As more and more of our attention is being demanded everyday, it becomes necessary to find new ways to cope that are constructive and adapt to our lives. Paradoxically enough technology may be the answer to this crisis of self-care and the music of Los Angeles-based musician and theta healer Alexandra Crotta, a.k.a. Uppy, may hold the key.

A healer by trade, Uppy's music doesn't so much set out to soothe the listener like a traditional ambient album or guided meditation but rather works to awaken something deeper within the far reaches of your consciousness. Her debut EP, Medicute, unfolds like a digital collage of glitchy beats and ethereal melodies peppered by playful vocal samples percolating throughout each track, stimulating the brain in a sort of deep-tissue cerebral massage. At its core, Medicute is pop at its most experimental. Distorted almost beyond recognition, it is pop that is defined by quirks, constantly molded into different shapes like a cotton-candy colored ball of Play-Doh.

To say Uppy is unlike anything you've heard before wouldn't do it justice. It is a contemporary approach to a New Age aesthetic interpreted through a kaleidoscopic pop lens, merging technology with mysticism to create something you may not fully understand but will feel viscerally drawn to nonetheless.

PAPER sat down with Uppy to chat about Medicute, reconnecting with your inner child, theta healing, and more:

Your sound sort of reminds me of like Holly Herndon-meets-Bjork-meets-Grimes, it's very distinctive. How did that end up developing?

Oh, wow. That's such an honor to receive such accolade as to be amongst them sonically, this means so much. I enjoy them all quite a lot so I feel that may pull through.

Where did you draw inspiration from for this latest EP?

Uppy originally began as a tribute to Poppy. I was spending some time with SOPHIE during this creation and a lot of my inspiration came from her energy, she's a really powerful creator that evokes what seems like a past life anomaly in my spirit. Another muse for me is (Garrett) Børns, we frequent the same coffee shop and I wrote "Born Affection" from the voice of a Millennial Gen Surrealist DaDa Pop Star... this same persona is what's fueling the full length Uppy album which should be out sometime next year.

What does "Medicute" mean, exactly?

Medicute is to meditate and feel cute, at the same time.

You've described the project as being a collaboration between "your inner child and Artificial Intelligence," what do you mean by that?

Our inner child is our first software, that can be still running on old "programming." The relationship one can have with their inner child can be nurtured through different connection processes within the subconscious mind. As an adult, people's "inner children" are still within them, functioning, and living out patterns that they no longer intentionally are activating that are being created through reality structuring.

I do a lot of "self-care" management to bring out new ideas to create with: manifesting, automatic writing, and divination. I firmly believe the deeper you go on a subconscious level the more you realize how deep both your mind and AI is. I talk about this quite a lot --Your reality is being projected through your energy field and you can edit it if you wish using different processes. AI is a collaboration in that you're able to systematically go back into your memory, "matrix" re-imprint things and change future realities. Utilizing these concepts and others can actually reorient the way you process the world, music, and technology. AI to me not only involves technology but is energetically infused with the programmers belief structures, so to edit AI on a cultural level is to look into the cultures mass belief system on AI which from my studies is steeped in a bit of unawareness and fear. My goal is to collectively heal these beliefs, and also heal the internet.

Have you used AI as a part of your song writing process?

I've been hacking the program text-edit on my Macbook for the last year, and created a program that can create frequency that when recorded can amplify certain emotions in the body. In terms of my own song writing, I basically back peddle and "clear" every experience I have with writing and get to the root of what my emotions were to fully process what the experience is meant to teach me. I call it "experience digging." It's a brilliant way to manifest the purest form of your desires. Using real life experiences I am able to start the song writing process and open the door to creating a sonic structure.

How did you end up becoming a theta healer?

My mother is the chef for some of the top healers in the US so my interest was initially sparked by going to events and seeing the magic of art and healing combined. The way I describe "Theta" to clients is I am a "subconscious belief re-programmer" or, in an easier form, I can hypnotize you to release old patterns or beliefs that are blocking you from what you want. For example, if you have an old belief that if you're an artist you're going to "struggle", your whole reality is then going to be hard wired around being an artist who is struggling. This may be really traumatizing as you'll keep experiencing you're belief magnetized over and over again until healed. The next step would be to release yourself from the belief that you need to struggle in order to be an artist, or if that struggling as an artist is the only way you derive your art/inspiration from then replace with a belief that will better serve you, i.e. it's possible to experience grace and ease and be inspired to create art from having plenty. Once the belief is identified through your energy field and your experience, I ask permission if it's okay to release you of this and then we test if the belief has shifted with muscle testing. Muscle testing is a process that allows for us to know if you actually have cleared the belief — the body will answer truthfully when asked questions. This whole process has awakened literal new worlds to me, so is imperative I feel to create awareness especially to artists because of the creative energy involved to create work their soul needs to express.

You are also working on developing care programs for touring artists?

As a musician myself, with an understanding of the process of building music, I'd like to bring attention to how quantum creation can be built through the subconscious, specifically in the realms of pop music. Theta-healing and my artwork is to serve as muse and healer to unlock what your truth is as an artist and rediscover your purpose. A hyper-intuitive version of yourself. To identify what's blocking certain desires from manifesting, and teach you how to clear them so they can show up. To create a reality from your choice and to be hyper intuitive is the highest form of inspiration as you'll always be creating from choice in the moment or "now." And if you are being influenced to know how beliefs and influences will profit you energetically and which will drain you energetically. I also am really looking forward to working with touring artists on how to ground, stay connected and energetically inspired so they can bounce back into studio with less recovery time from the potential burn out of touring. I'd also like to show you how to create new realities to play in.

Where can people go if they want to learn more?

You can check out more of this info on www.corasclub.com