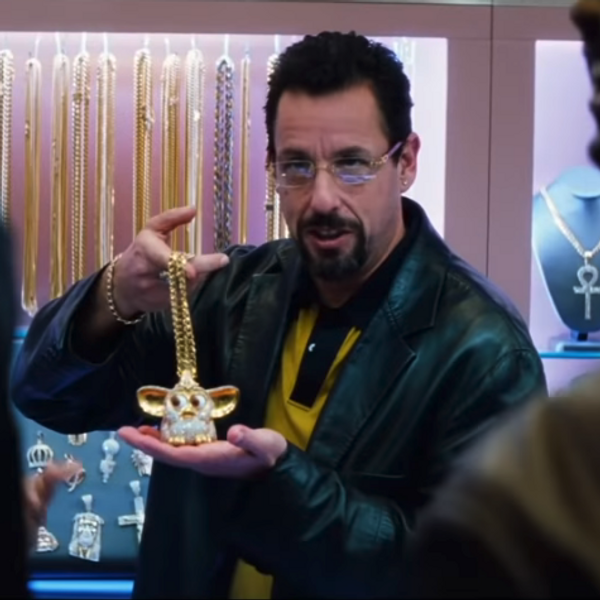 Adam Sandler — the 53-year-old Jewish comedy icon beloved to fans and hated by critics for his prolific resume which ranges from inane to generic to truly awful to heartwarming to clever — is finally stepping into dark, tortured, Oscar bait territory for the Safdie Brothers' new thriller Uncut Gems. Naturally, the circumcision jokes are bubbling up online (though no one can quite figure out how to make it happen) so, we'll just address them here: Sandler is a gem, but not uncut.

Sandler plays a goateed, philandering Jewish New York City gem dealer, who supplies bling to rappers and NBA players, but gets in trouble through gambling and cheating on his wife/girlfriend, who is played for some reason by Idina Menzel. Jonah Hill was originally slated for the role after Sandler initially passed, but was switched out after his nerdy hero forbearer.

Related | If You Didn't Know Who Keke Palmer Was, You Do Now

Extra credit: celeb cameos. The Weeknd and NBA legend Kevin Garnett appear in the trailer. The best parts of the clip include when (a.) Sandler shoves poor Abel (no mustache) on his way out of the club and (b.) when he swears to a man who accuses him of resurfacing his swimming pool with borrowed money, "I never resurfaced anything!!!!"

Garnett is super excited. Nearly excited as as every Jewish man in America under the age of 35 who grew up going to NBA games with his dad and took film classes in college. Catch them on opening night this December.