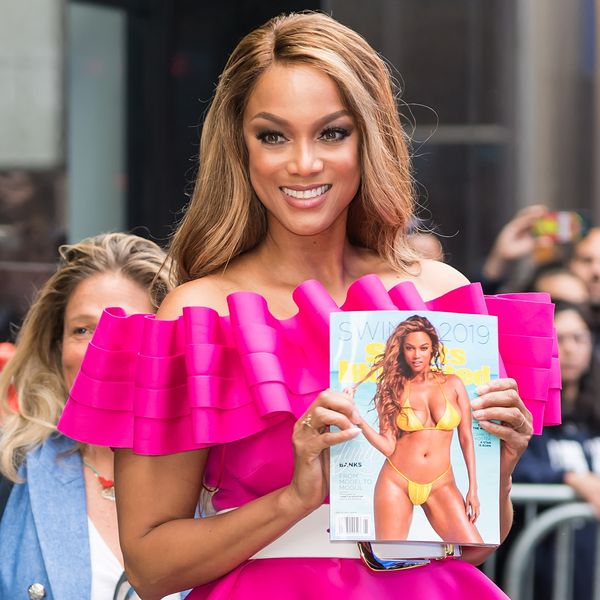 Back in the days of Tyra Banks' daytime talk show, she noted during an episode honoring Black History Month that she, too, carved out a place of her own in the record books. Indeed! In 1996, the trailblazing supermodel became a household name when she graced the cover of Sports Illustrated's annual swimsuit-focused edition. She was the first Black model to do so.

Today on Good Morning America, Banks revealed her latest cover, rocking a yellow Andi Bagus string bikini. It was shot in the Bahamas by Laretta Houston and marks the third SI Swimsuit cover for Banks, now 45. Banks' fashion career skyrocketed when she first starred on the cover of SI Swimsuit in 1996, with model Valeria Mazza, followed by a solo cover in 1997. That solo image of Banks posing in a red and white polka-dot bikini became instantly iconic.

The late '90s SI Swimsuit covers helped Banks transform a career of high-fashion modeling into mainstream ubiquity, eventually becoming a famous Victoria's Secret Angel and business mogul, from the runaway success of America's Next Top Model to her upcoming Modelland theme park. For the 2019 issue, Banks aimed to reimagine her polka-dot bikini moment.

"We couldn't find the exact one in the archives — it was the polka-dot bikini so we recreated that bikini," she said. "I recreated it [the shoot] — 25 pounds heavier." If you'll also recall, size inclusivity is something Banks has long championed in the fashion industry. Back in 2007, after paparazzi photos of Banks on vacation in a swimsuit leaked, critics criticized her for gaining weight. Banks notably fought back on her own talk show, telling naysayers to "Kiss my fat ass!"

This year's issue theme is "Shattering Perceptions," which aims to "redefine the cultural conversation around beauty by celebrating a diverse group of women." Among those featured are Muslim model Halima Aden, who wears an hijab and Burkini in the issue; 54-year-old model Paulina Porizkova, who pens an op-ed on fashion industry ageism; Simone Biles, Winnie Harlow, Olivia Culpo, Lindsey Vonn, and more.